SMH……we guess Raz B’s brother Ricky Romance isn’t as hard as he makes himself out to be!!

The “Internet gangster” was attacked last night at a concert in Atlanta…..and he’s pointing the finger at former Bad Boy rapper Young Joc.

Romance claims that Raz was scheduled to perform at the Salute the DJ’s Award Show …..until Joc and his security got in the way and refused to let them take the stage.

Ricky then tried to fight to get past Joc’s security….but ended up getting roughed up a bit and thrown out of the Atrium Event Center. (Note: this is the same guy who threatened to put a pistol in Chris Brown’s mouth)

No police report has been filed.

We never condone violence, but in this case…. he probably got what he deserved! 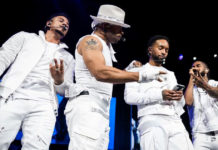