Taraji P. Henson and her 15-year-old son Marcel were spotted kicking it courtside Wednesday (May 27) night as the Lakers and the Nuggets went head to head during game 5 of the Western Conference Finals during the 2009 NBA Playoffs at the Staples Center in Los Angeles.

Who else was there, you ask? Tyrese (who butchered the National Anthem … or so we heard), Denzel Washington & his wife Pauletta, M.I.A & her husband Ben Brewer, and Disney star Zac Efron. Continue reading to check out all of the pics! 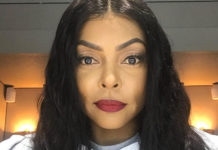 Annie Are You OK? Taraji P. Henson Compares Herself to Michael Jackson in Hilarious Makeup Selfie