Denise Helms, the woman who made headlines this week for writing a controversial Facebook post in which she calls President Obama the N-Word and hopes for his assassination says that she wishes she could take it all back now.

“Another 4 years of this Nigger … Maybe he will get assassinated this term.”

Denise, knowing she would receive public backlash and scrutiny, reportedly set the post to “private” on her Facebook page … but an ex-boyfriend took a screenshot and re-posted it for everyone to see, her mother told Fox 40 News in Turlock, CA.

The message not only got the attention of the national news media, but also the Secret service and her employer Cold Stone Creamery, who promptly fired Helms as they received dozens of threatening voicemails.

“This employee is no longer with the company and her disgraceful and completely unacceptable comments do not reflect our views,” a tweet from the ice cream shop read.

What makes the situation even more disturbing than her Facebook post, is the fact that at first, Denise had no remorse what-so-ever, and even told a local reporter, “I didn’t think it would be that big of a deal.”

She admitted the part of her message where she calls for President Obama’s assassination was “harsh,” but offered no apology what-so-ever by calling the President of the United States of America a “Nigger.”

She also said that if someone were to assassinate President Obama, “I don’t think I’d care one bit.”

When the Fox 40 reporter told her that the Secret Service was on her tail, and that she could possibly be arrested and charged with a crime, Helms responded, “Okay … but what did I do wrong? That’s fine if they want to. But I don’t understand what I did wrong.”

But now Denise Helms is singing a different tune. A tune that she hopes will make her look less like a racist, which she claims she isn’t. The equivalence of a fat person considering themselves to be “big boned” or a cheapskate referring to themselves as “frugal.”

“It does [sound like I’m a racist],” Helms said, “but I am not. That’s what everyone’s been telling me, ‘You know, what you said sounded so racist,’ and it does, and you know, I take it back. If I could erase what I said, I would.”

Helms also said that she’s been in contact with police because she’s been at the receiving end of numerous death threats, which is probably why her attitude about the situation has changed so quickly.

Helms admits that what she did was “wrong,” and she doesn’t really want President Obama to be assassinated because, “he does have two kids.”

Denise still doesn’t get it, y’all. 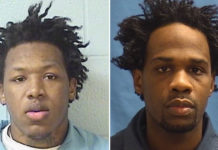 RondoNumbaNine Says He Did NOT Snitch on Cdai, Threatens to Sue VladTV for “Trying to Assassinate Our Character”