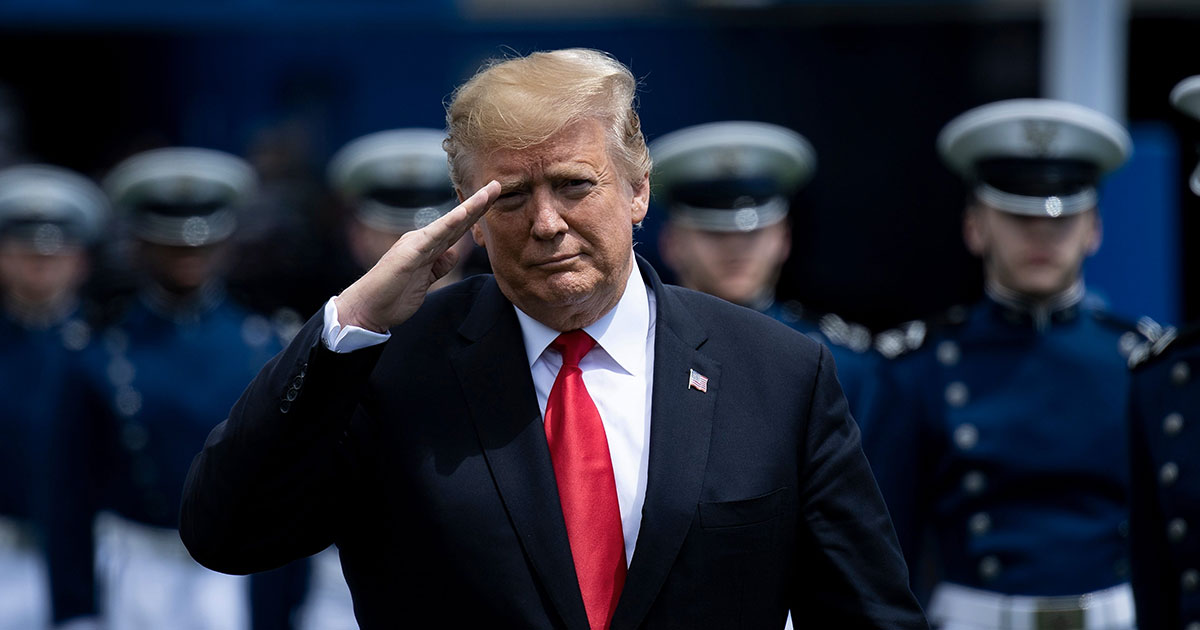 President Donald Trump described American soldiers who died on French soil during a crucial World War I battle as “losers” and “suckers,” according to an exclusive report published by The Atlantic on Thursday (Sep. 3).

The president reportedly made the disrespectful remarks ahead of a planned November 2018 visit to the Aisne-Marne American Cemetery in Paris, France.

The trip, which was to commemorate the 100th anniversary of the end of World War I, was ultimately canceled after Trump said “the helicopter couldn’t fly” and that the Secret Service refused to drive him to the cemetery. But, according to The Atlantic‘s report, “neither claim was true.”

The real reason Trump didn’t want to visit the site was because he was afraid the rain would mess up his hair, which he has described in the past as “great.”

On top of that, the president didn’t think it was important to honor dead American soldiers, The Atlantic‘s report claimed, citing four people with direct knowledge of the situation.

“Why should I go to that cemetery? It’s filled with losers,” Trump reportedly told senior staff members the morning he was set to visit the cemetery.

In a separate conversation around the same time, he called U.S. Marines who were killed in the Battle of Belleau Wood “suckers” because they died, the report stated.

The battle and the ground it was fought on are widely considered an important part of Marine Corps history because it was where American troops and allies stopped the Germans from advancing towards Paris in 1918.

But The Atlantic reported that Trump didn’t understand the battle’s significance, and even asked advisers: “Who were the good guys in this war?”

The Commander-in-Chief also couldn’t comprehend why the U.S. became involved with World War I to side with Allied forces.

The Atlantic‘s report also noted that the president didn’t want wounded veterans at a military parade because he felt as though spectators would feel uncomfortable in the presence of amputees.

“Nobody wants to see that,” he said while planning an event in 2018.

Donald Trump—who didn’t serve in the military after infamously dodging the draft during the Vietnam war due to the alleged presence of bone spurs in his feet—has a long history of making disparaging remarks against veterans, including Senator John McCain, whom he called a “f**king loser” after seeing flags lowered to half-mast in McCain’s honor after his death in 2018.

“What the f**k are we doing that for?” the president reportedly asked aides.

Sen. McCain was formerly a U.S. Navy fighter pilot who was captured and tortured by North Vietnamese forces during the Vietnam war for over five years.

“He’s not a war hero,” Trump said of McCain in July 2015 while he was still running for the Republican presidential nomination. “He was a war hero because he was captured. I like people who weren’t captured.”

Trump has continued to make rude comments about McCain even after his death. In 2019 during an appearance at the Faith and Freedom Coalition, the president implied that McCain was in hell.

“We needed 60 votes and we had 51 votes,” Trump said, in regards to efforts to repeal the Affordable Care Act.

“And sometimes, you know, we had a little hard time with a couple of them, right? Fortunately, they’re gone now. They’ve gone on to greener pastures—or perhaps far less green pastures. But they’re gone. I’m very happy they’re gone.”

She said: “President Trump holds the military in the highest regard. He’s demonstrated his commitment to them at every turn: delivering on his promise to give our troops a much needed pay raise, increasing military spending, signing critical veterans reforms, and supporting military spouses. This has no basis in fact.”

Farah added in a separate statement: “I’ve watched President Trump solemnly sign letters to the families of fallen heroes. He’s honored their memories by doing more than any modern president to get us OUT of endless wars.”

White House deputy press secretary Judd Deere also called The Atlantic‘s report “false,” saying via Twitter: “Not a soul brave enough to put their name on any of these accusations … Just another anonymously sourced story meant to tear down a Commander-in-Chief who loves our military and has delivered on the promises he’s made. What a disgrace!”

Not a soul brave enough to put their name on any of these accusations. That's because they are false. Just another anonymously sourced story meant to tear down a Commander-in-Chief who loves our military and has delivered on the promises he's made. What a disgrace! https://t.co/NInGxeDcI2

President Trump has often said he’s done more for veterans than any other president before him.

He also falsely said that he was behind the passage of the Veterans Choice Act, when it was actually Obama who signed it into law while he was in office back in 2014.

When a reporter called Trump out for his false claim during a news conference last month, the president refused to answer and walked out of the room, abruptly ending the conference.