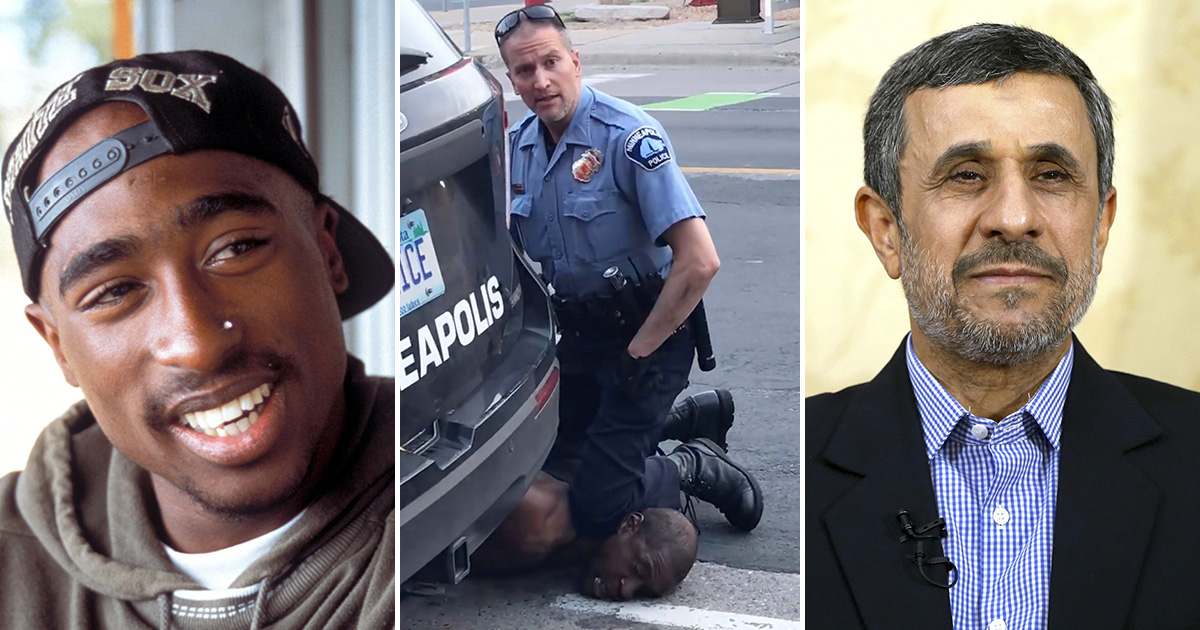 A former Iran president is going viral on social media after quoting Tupac while speaking out on the police killing of George Floyd.

Yes, you read that right. Outrage over George Floyd’s fatal arrest has spread so far across the world that former Iran president Mahmoud Ahmadinejad has taken to social media to express his feelings, and he quoted a Tupac lyric while doing so.

Ahmadinejad took to Twitter Friday (May 29) and said Floyd’s killing earlier in the week was “deeply disturbing” and “upsetting” to him.

He also warned folks that “the scheme of the world powers is to cause disunity in order to keep all societies under control” and said Floyd’s killing was “the result of the current world order which we all must unite against.”

Ahmadinejad ended his tweet—which included a screenshot from the video showing former Minneapolis cop Derek Chauvin with his knee on Floyd’s neck—with a line from the Tupac song “Changes” that basically sums up police brutality against Black Americans: “Pull the trigger kill a N***a he’s a hero”

The scheme of the world powers is to cause disunity in order to keep all societies under control. The killing of #GeorgeFloyd was deeply disturbing & upsetting & is the result of the current world order which we all must unite against.
"Pull the trigger kill a Nigga he's a hero" pic.twitter.com/1giRGxPy68

Mahmoud Ahmadinejad served as the sixth President of Iran from 2005 to 2013.

Of course, the irony of an Iranian politician calling out police brutality in America (and using the N-Word to do so) hasn’t been lost on social media.

This guy imprisoned women for not wearing cloth on their head.

Since Twitter is banned in Iran, I will say this for everyone: pic.twitter.com/V1lSClwJmC

Mr. Ahmadinejad sir I'm not sure you can say that

…brutally oppressing and mistreating its citizens.

you’re gonna get cancelled for this one agha ahmadinejad ?

WTF…Seriously how dare you when under your watch hundreds of peaceful protesters were brutally gunned down & thousand were arrested, many of whom were tried in show trials & received long term prison sentences. There is a time to talk & then there is a time to shut the F up.

If anyone knows about killing people in cold blood and keeping a society under control, it's you

The president of Iran is quoting a Tupac song on the timeline right now https://t.co/a5PRsa07Pa

Is this real life?

The former president of Iran quoting Tupac. What?

A former president of Iran quoting the lyrics of 'Changes' by Tupac Shakur was definitely not something I expected to see emerge from all this. Just….no. https://t.co/BrBmGee1gP

Ex president of Iran quoted Tupac lyrics about police brutality, you can't make this shit up… 2020's an illusion, this shit can't be real https://t.co/l0E8jbjrIW