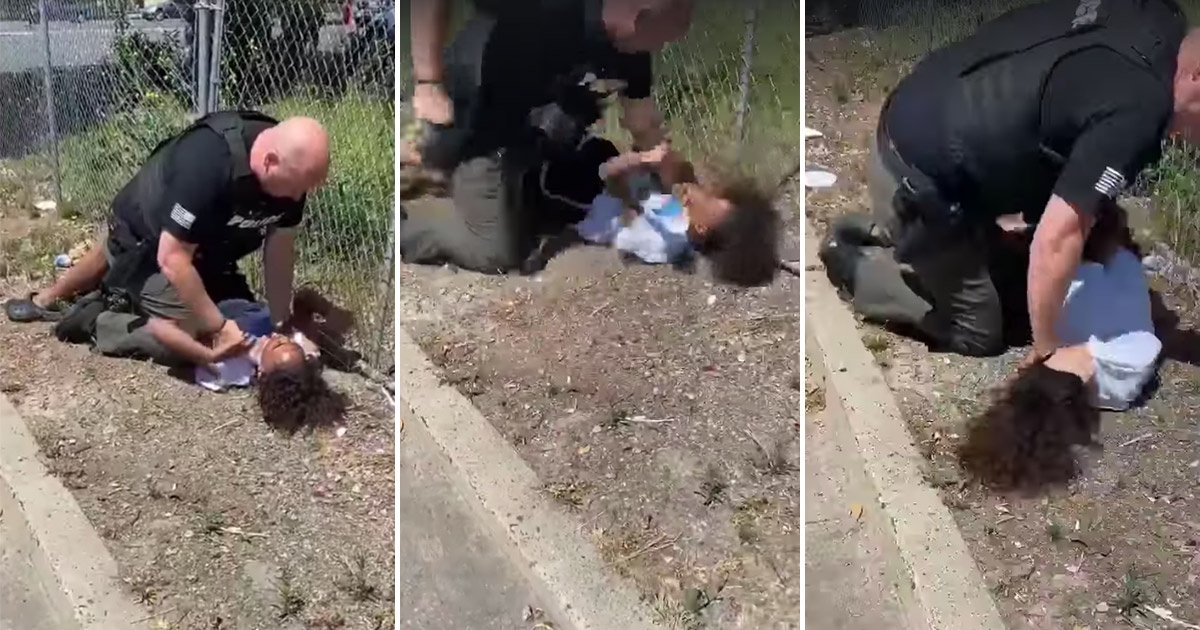 Video footage has gone viral showing a white California cop viciously attacking a 14-year-old black boy while trying to detain him because he thought he had weed on him.

The shocking footage, which was shot in Rancho Cordova, shows the officer punching the teen in the face and slamming his head into the pavement after accusing him of possessing marijuana, which he didn’t have. It turns out the only thing in the teen’s possession was a Swisher Sweets cigar.

The video was originally shared by an older sister of one of the boy’s friends and has over 6 million views.

RCPD brutally tackled and hit my best friend’s 14 year old brother today over a swisher sweet! The officer had no reason to brutalize and traumatize this boy like this! He has a pre existing health condition which could be fatal under this kind of stress! Unjustifiable! pic.twitter.com/94fqyu3J28

“RCPD brutally tackled and hit my best friend’s 14 year old brother today over a swisher sweet!” she wrote. “The officer had no reason to brutalize and traumatize this boy like this! He has a pre existing health condition which could be fatal under this kind of stress! Unjustifiable!”

Criminal defense attorney Rebecca Kavanagh shared the disturbing video on Twitter after the boy’s family sent it to her.

“The child was not charged with marijuana possession. Just resisting arrest,” she wrote. “He has a serious heart condition and this sort of brutal assault could have had fatal consequences. He is still suffering chest pain.”

She added: “Also let me clarify, the child didn’t have marijuana on him. Just a Swisher. I think it matters zero if he was smoking marijuana, but there are a bunch of people in the comments already using that as justification for the brutality, so there’s that.”

The family have asked that this video be shared in the hope that the police officer is fired and criminal charges are brought. #JUSTICE4JAH

I think it matters zero if he was smoking marijuana, but there are a bunch of people in the comments already using that as justification for the brutality, so there's that.

Senator Kamala Harris—a former Democratic presidential candidate who was California’s attorney general and a prosecutor in San Francisco—also shared the video on Twitter. She called the incident a “horrific abuse of power” and said that the officer “must be held accountable.”

Julian Castro, another former Democratic presidential candidate who was the former mayor of San Antonio and President Obama’s secretary of Housing and Urban Development, tweeted: “This video of a @RanchoCordovaPD officer beating a 14-year-old is sickening, and demands immediate action. How many of these videos must we see before we do something about police violence in this country?”

The officer hasn’t been identified, though family members have identified the teen as Elijah and are using the hashtag #JusticeforJah to bring attention to the incident.

Elijah’s family members are also calling for the officer to be fired and face criminal charges.

Elijah’s sister said on Twitter: “He was charged with ‘resisting arrest.’ But what was he even being arrested for?? For having a swisher? & they ended up letting him go so what was all of this for?? Smh he was left with scratches and chest pains! this was so unnecessary!”

The boy’s uncle, Justin Tufono, wrote on Instagram, along with a longer version of the footage: “This is my 14-year-old nephew being shoved into the ground by a Rancho Cordova police officer triple his size. 14 F**KING YEARS OLD! And he’s handling him like a man equal his size! For what? Possession of a swisher? Is all this sh** really necessary? He already had him held down and he felt the need to punch him AFTER shoving his face into the ground!? He acts like he f**king hurt somebody!”

This is my 14 year old nephew Elijah being restrained by this Rancho Cordova cop who felt the need to man handle him. Look how skinny my little man is!!! That cop is triple his size!!!

I remember telling Elijah, “you’re gonna experience the world in a very different way and I want you to know that it isn’t fair,”…

My blood is boiling. Why did this man feel the need to shove his face in the dirt and throw punches after obviously restraining him with all his weight!

Note: he has a chronic heart condition that prevents him from doing strenuous activity. This could’ve gone a whole different way if he had an episode during all this.

The Rancho Cordova Police Department has since issued a statement confirming that the incident was being investigated and giving the officer’s version of events.

The department identified the officer in the video as a “Problem Oriented Policing (POP) Officer” who “was proactively patrolling the area of Mills Station Road and Mather Field Road. The deputy was in the area due to complaints from citizens about hand-to-hand sales of alcohol, tobacco and drugs to minors.”

The department added that the officer’s use of extreme force on a juvenile was warranted because the boy resisted arrest.

“It’s important to put video footage into context, especially in relation to a use of force incident,” the department’s statement read. “In this case, the deputy saw what he believed to be a hand-to-hand exchange between an adult and juvenile. As the deputy turned around, he lost sight of the adult, who left the area.

“When the deputy approached the juvenile, the juvenile was uncooperative and refused to give the deputy basic identifying information. He told the deputy he was 18 years old. Having reasonable suspicion that criminal activity was occurring, the deputy attempted to detain the juvenile so he could conduct further investigation.

“The juvenile became physically resistive at that time, causing the deputy to lose control of his handcuffs, which landed several feet away. The deputy attempted to maintain control of the juvenile without his handcuffs and while alone waiting for his partners to arrive and assist him.”

“Ultimately, the deputy recovered tobacco products from the 14-year-old juvenile, which is presumably the reason for his resistance. The juvenile was cited and released to his guardians.

“This type of situation is hard on everyone–the young man, who resisted arrest, and the officer, who would much rather have him cooperate. The community should know our deputies have a heart for the Rancho Cordova community, especially for the youth they serve through the schools, PAL sports, and our new Youth Center.

Sheriff’s spokesperson Sergeant Tess Deterding also pointed out that the investigation is “in its infancy and the facts as we understand them now are subject to change as we conduct a more thorough and complete examination of the circumstances surrounding this incident.”