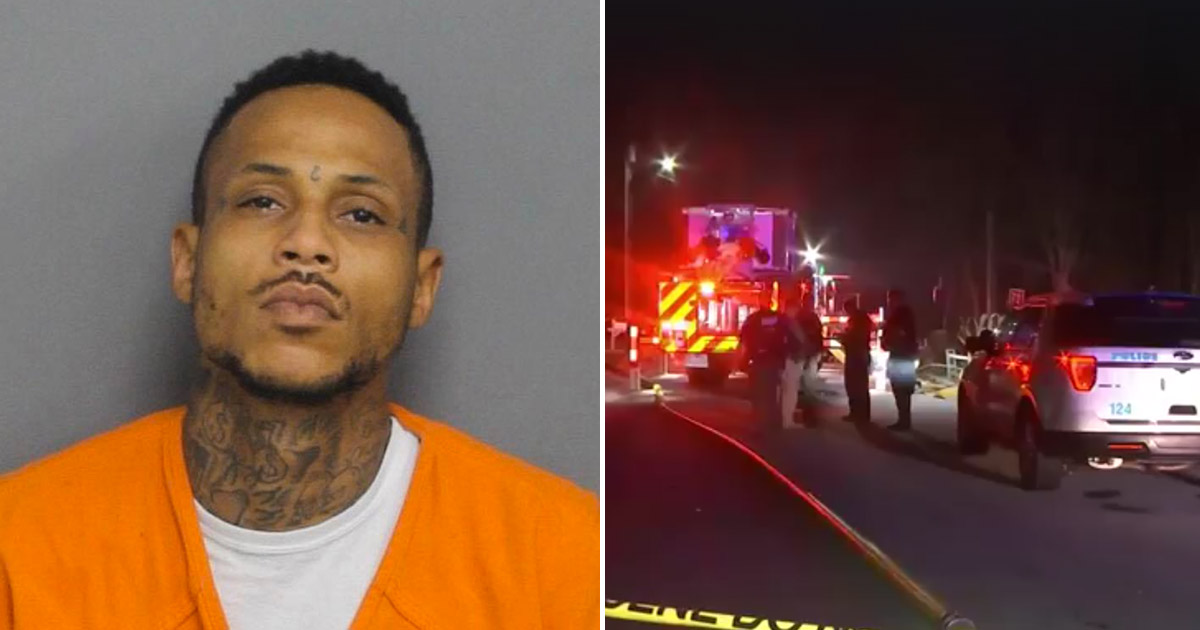 A South Carolina man is facing major charges after he shot up his baby mama’s house and set it on fire.

33-year-old Johnathan Ahren Emilien was wanted by police for arson and attempted murder, but has since been arrested.

Fountain Inn Police Chief Michael Hamilton said they responded to a call from the area Tuesday (Mar. 17) around 9:30 p.m. in regards to a victim suffering from a gunshot wound and a home that was on fire.

The condition of the gunshot wound victim hasn’t been revealed by officials, but Chief Hamilton says they were treated at Greenville Memorial Hospital.

Emilien was on the run as of Wednesday, but Fountain Inn Police confirmed early Thursday morning that he’d been apprehended in Mississippi.

Here are some things you need to know about Johnathan Ahren Emilien and the recent events that took place.

Days before the incident, Johnathan posted videos of him arguing with his baby mama on social media.

Johnathan shared several videos of him going and back and forth with his baby mama over their daughter Salana.

In one of the videos, Johnathan accuses his baby mama, Monique, of not allowing him to see his child because he’d stopped paying her bills.

Monique reveals in the video that Johnathan broke a window into her home to confront her about seeing their child.

“I want my own house and everyone’s mad at me because they want money from me. I stopped paying bills and started only buying for Salana. Now I got the whole family mad. How can you be mad because I want my own. NOW SHE THREATENING NOT TO LET ME SEE MY CHILD. BITTER. I WANT MY OWN HOME. Women hate independent men that don’t need them for sh*t.”

In another video he posted on Facebook, Johnathan argues with Monique about seeing his daughter and things get escalated to the point her family gets involved.

On Wednesday, March 11th, Johnathan posted a video of him first telling his baby mama Monique she’s being vindictive towards him and then spends the rest of the video talking to his infant baby girl and telling her that he loves her and will always be in her life no matter what.

He captioned the footage: “This is an old video. I’m posting all because I know they will slander me with my child.”

Johnathan shot up his baby mama’s house and set it on fire.

Police responded to reports of a gunshot wound victim and a residence that was set on fire on Tuesday evening (March 17) on Lakeview Drive in Fountain Inn.

It was later revealed that Johnathan Ahren Emilien was responsible for the horrible crime and was wanted by authorities. He was considered armed and dangerous.

The gunshot victim’s condition is unknown, but they were treated at Greenville Memorial Hospital. Some on social media were saying the gunshot wound victim was the mother of Johnathan’s baby mama (his child’s grandmother), however, we haven’t been able to verify that information.

According to Fox Carolina, the Red Cross announced Wednesday (Mar. 18) that they were assisting five adults and one child who were affected by the residential fire.

Hamilton said Thursday that all five victims were doing OK.

Following the crimes he committed, Johnathan posted videos of him on the run and speaking on how he’s not going down without a fight.

In a video posted hours after the shooting and arson, Johnathan said he was not going to turn himself in to police until he sees his daughter.

Johnathan also said he would kill his baby mama and her friends and family over his daughter.

“Before my daughter thinks I left her, I will annihilate you motherf*ckers,” he said.

In one of his last video posts, Johnathan admits to firing bullets into his baby mama’s home and setting the house on fire. But he makes it clear next time, he won’t miss.

“I set their whole sh*t on fire, and as soon as they opened the door, I went to letting bullets off in that b**ch,” he said. “I’m gonna kill them b**ches. Only person that’s gonna live is Salana.”

Johnathan said he went back to the crime scene the next day and saw police there, but they didn’t notice him.

He also said he was going to finish the job and kill his baby mama Monique and her family.

“I missed last night. I’m not gonna miss again. And I’m going to kill y’all. I’m already wanted for it, so I’m telling you what I’m going to do.”

Johnathan also named several of his baby mama’s friends and made it clear if she tries to hide from him, everyone she knows will die.