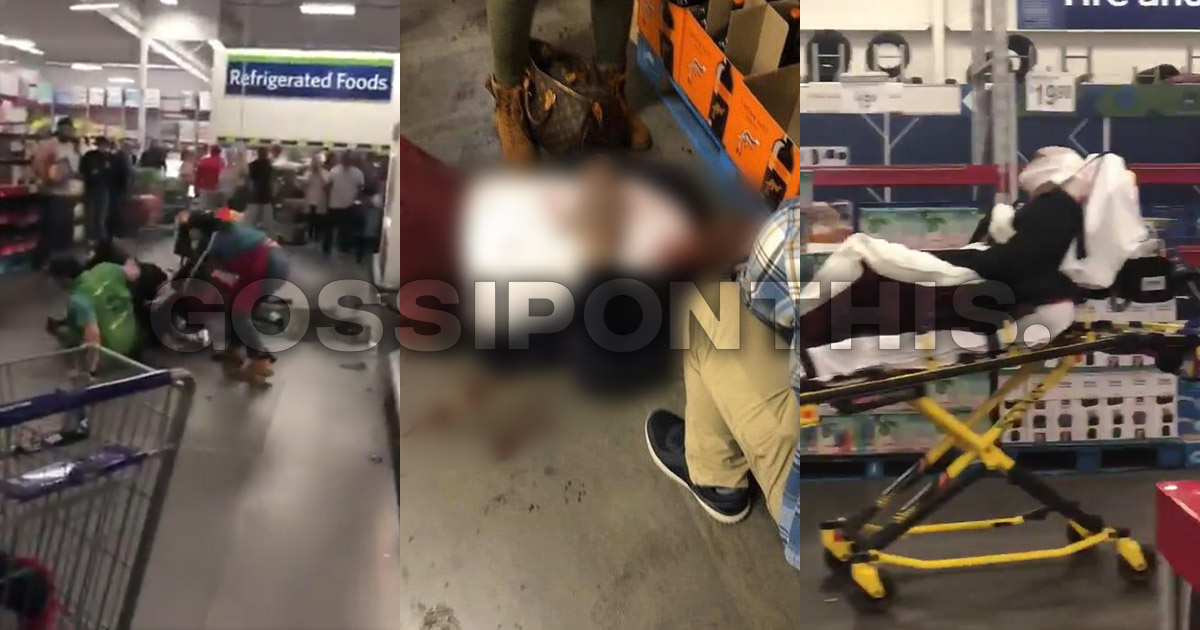 The coronavirus pandemic has folks in such a mass hysteria that they are actually fighting in retail stores and supermarkets over supplies like toilet paper, bottled water, and food.

A man was violently attacked at a Sam’s Club in Hiram, Georgia Thursday (Mar. 12) over an apparent dispute over supplies, according to a number of social media posts about the incident.

While video footage that has surfaced does not show the man actually being stabbed, as reported by a number of people who were there, it does show him being attacked and later carried away by paramedics.

Details are scarce at the moment, however, some people are saying the man was stabbed with a broken wine bottle, and others are saying he was hit in the head.

A photo that is being passed around on social media shows a man lying on the ground covered in blood.

The caption of the image reads: “This is 100% ridiculous! This happened at the Sam’s Club in Hiram!!! My friend is there and posted some pics!! Apparently this man and another man were fighting over FOOD!!! #LOOSINGFAITHINHUMANITY”

Neither the attacker nor the victim have come forward to confirm or deny any of the social media reports, but many are already blaming the incident on the coronavirus outbreak.

Over the last several days, as the virus spreads all over the world (so far, there are more than 130,000 cases and nearly 5,000 deaths) a number of retail stores have experienced mass shortages of household products such as toilet paper, paper towels, bottled water, disinfectants, hand sanitizer, and more.

A number of people have posted photos of empty shelves online, and the hysteria is so bad that the aforementioned products are on backorder on Amazon.

It is believed that folks are freaking out because the entire country of Italy is on a mandatory quarantine, and if that were to happen elsewhere, people are afraid they won’t be able to leave their houses to shop for needed supplies.

This is what happens when people all over the world are panicking:

Does #CoronaVirus cause explosive diarrhea or make our tap water suddenly stop working? Maybe I missed something. #coronapocalypse pic.twitter.com/teMOP8IPOz

Bruh wtf y’all taking this too far. All the toilet paper was gone from Sam’s Club. Costco was out of water on Friday also. HOW SWAAYY?!? pic.twitter.com/OC4M8B2SLr

My local supermarket an hour ago… wasn’t there to get TP but man if anyone actually needed it… shit outta luck ???? #coronapocalypse pic.twitter.com/6qTTjfT1om

The paper goods aisle at my local Target. The soup section was equally decimated. #coronapocalypse pic.twitter.com/APEarCoJ0d

Just got to LA and checked out #TraderJoes for the first time… Does this place usually have food in it? #coronapocalypse #JDC pic.twitter.com/PouaqoRelS

Trader Joe’s during the #coronapocalypse ??? pic.twitter.com/tY2uJGmCkp

#CoronavirusPandemic #Covid_19 #CoronaOutbreak As I was leaving Meijer’s, the management told me they have done more sales today than on Black Friday and have never seen a rush like this before. pic.twitter.com/PLcDFyal2U

Video taken by Daniel Copus at the Findlay @meijer tonight….sound added by us ? On a serious note, please do not panic, Findlay. Just remember to wash your hands. #coronapocalypse pic.twitter.com/2XimToLlRt