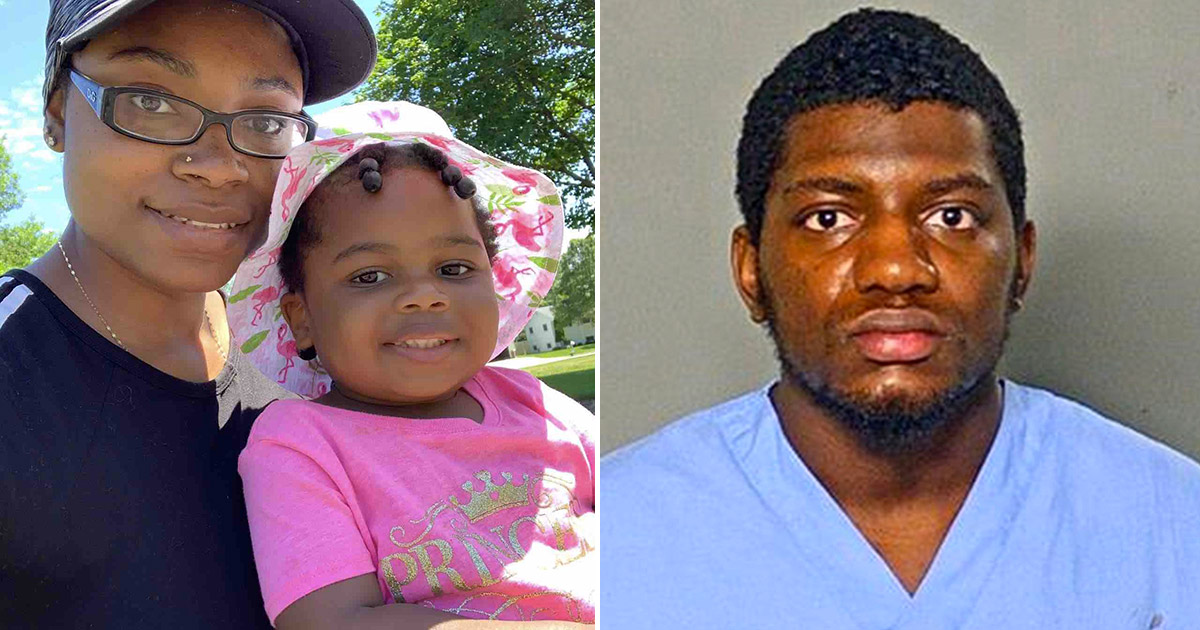 Wisconsin police have arrested the man they say is responsible for a vicious attack that severely injured his pregnant ex-girlfriend and killed her 3-year-old daughter.

Police in Appleton responding to a home the night of February 26th arrived to find 27-year-old Tiana Corbin and 3-year-old Zyana Corbin suffering from “life-threatening injuries … consistent with the use of an edged weapon,” according to a news release.

According to a probable cause statement, when police arrived on the scene, one of the officers reported witnessing a “frantic and distressed” man walking towards police, telling them that a woman was covered in blood in the hallway of an apartment and a baby had “cuts all over her face.”

The probable cause statement said Zyana had a deep cut to her throat, and appeared to be unconscious, while Tiana had injuries to her chest and abdomen.

Officers said Tiana also had a large cut to her lower back region and severe cuts to her face, neck and chest.

Tiana told police she’d been pepper-sprayed and also said Williams beat her and used a knife.

Tiana and Zyana were both taken to a nearby hospital, where Tiana stabilized following a successful surgery.

Police said Tiana’s unborn baby was unharmed in the attack, and Tiana is expected to make a full recovery.

Zyana unfortunately “succumbed to her injuries” in the emergency room, the news release stated. An autopsy is scheduled for Friday (Mar. 6).

During his first court appearance, prosecutors said the night of the violent attack, Williams flew into a rage when Corbin told him she wanted to end their relationship.

“He was beginning to feel that his girlfriend, who was pregnant with his child, was beginning to distance herself from him,” Outagamie County District Attorney Melinda Tempelis said during the hearing, according to the Associated Press. “He began to concoct a plan to kill her and to kill her 3-year-old daughter.”

WBAY Action 2 News obtained a copy of the police report, which contained disturbing details about the violent attack:

While speaking with police, Tiana stated she met Williams on Instagram, and he had moved to Appleton from Minneapolis in the middle of July, and lived at her apartment for about three months.

She also told police she had been concerned about adding him on her lease because he had an eviction in Minneapolis, and didn’t have a job, and also wasn’t saving money.

Tiana then said she didn’t think she wanted to be with Williams anymore but was afraid to tell him because she was “scared of the way he moves and does things,” and wanted to be discreet.

She said when the attack started, she saw her daughter run out to the living room to the couch from her bedroom. She then continued on to say she was trying to get to the sliding glass door and was by the table near the couch, and said her daughter was standing on the corner of the couch near the door.

The complaint states Williams was able to get the phone out of Tiana’s hand as she was trying to call for help. Tiana was eventually able to open the sliding door and get out, but wanted to go back and grab her daughter, but Williams was still slashing at her.

Tiana then told police [she] reentered the apartment complex, and was told by a lady across the hall to not go back in, and that when she stepped out, Williams had closed the door and locked it.

The complaint states Tiana thought Williams wouldn’t hurt her daughter because he had a “really good bond with her,” and that she said she was begging for help outside and went to the neighbors, opened their door and was wondering what to do because Zyana was still in the apartment.

Eventually, Tiana told officials Williams then opened the door and ran towards the back, and she went inside and saw blood on her Zyana, who was still trying to breathe.

Tiana told police she could see her daughter’s throat.

Tiana told police she yelled for help, and saw blood on the floor while Williams attacked her.

In a separate interview, police sat down with Williams.

Williams then told police he met Tiana on Instagram Chat, and said Tiana was living in California, had a young daughter and was divorced.

He then stated Tiana and Zyana moved to Appleton in order to be closer to their family about a year ago, and he ended up moving from Minneapolis to be with Tiana to start a family because they both believed the same faith or spirit.

He told police he lived with Tiana and Zyana for the first five-six months until about December of 2019, and eventually moved out to live at a homeless shelter after the landlord began asking questions, since he wasn’t on the lease.

Afterwards, he told police he knew Tiana was about seven or eight months pregnant with his daughter, and is due in May, and that this would be his first child.

Williams stated he had noticed Tiana hadn’t been communicating with him, or reciprocating his affection, and was ignoring him, and once he felt she didn’t care about him, he “let things build up and it finally came out.”

The day of the attack, he told police he went to Tiana’s apartment around 6 p.m., and found Tiana’s sister and her children there as well.

After they left, Williams says Tiana asked him to leave since she was putting Zyana to bed, and at one point, she had stepped out of Zyana’s room to use the bathroom, and he went into the kitchen to get knives, which he said he hid in his pocket. He also told police he had grabbed a box cutter he had bought before from a top shelf in Tiana’s bedroom earlier in the evening.

When Tiana came back to the bedroom, he said she had taken her glasses off, and Zyana started playing with Tiana’s eyes.

He then told police he took out his pepper spray and sprayed Tiana in the eyes so she couldn’t see and disable her, and then took a knife from his pocket and stabbed and slashed her in the face multiple times.

Williams then told police while attacking her, the knife broke, so he took a second knife from his pocket and continued attacking her.

He said when Tiana was able to get away from him to get help, he then went after Zyana, and stabbed her in the face with a knife, and then used a box cutter to cut her face and throat in the living room, where she had ran to during the attack on her mother.

Police then asked him why he attacked Zyana, and he replied saying he knew the two were close, and he knew that “killing Zyana would bring Tiana great pain or hurt her a lot,” and knew how much Tiana loved Zyana.

When asked why he attacked Tiana, he said he couldn’t talk to her and his anger had been building up. He then told police he decided to call them to report the attack because he knew police would eventually get to him.

Williams also said he had been thinking and planning of ways to kill them for about a week, and initially thought about poisoning them, but decided to use a weapon instead.

He said he had planned to take out Tiana first and then Zyana because he didn’t want to leave her there. Williams also said he “rushed” his plan that night, and went to their apartment with the intent to kill them.

Police asked Williams why he wanted to kill Tiana and his baby, and according to the complaint, he said it was for “freedom and happiness.”

A GoFundMe page has been set up to assist Tiana in her ongoing recovery and to help cover funeral costs for Zyana. CLICK HERE TO DONATE.

“Zyana was taken from us to soon; she was full of life and so sweet. She always would smile and brighten up the room,” the page reads. “This unexpected tragedy has left Tiana in an immense amount of pain physically, mentally and emotionally.”