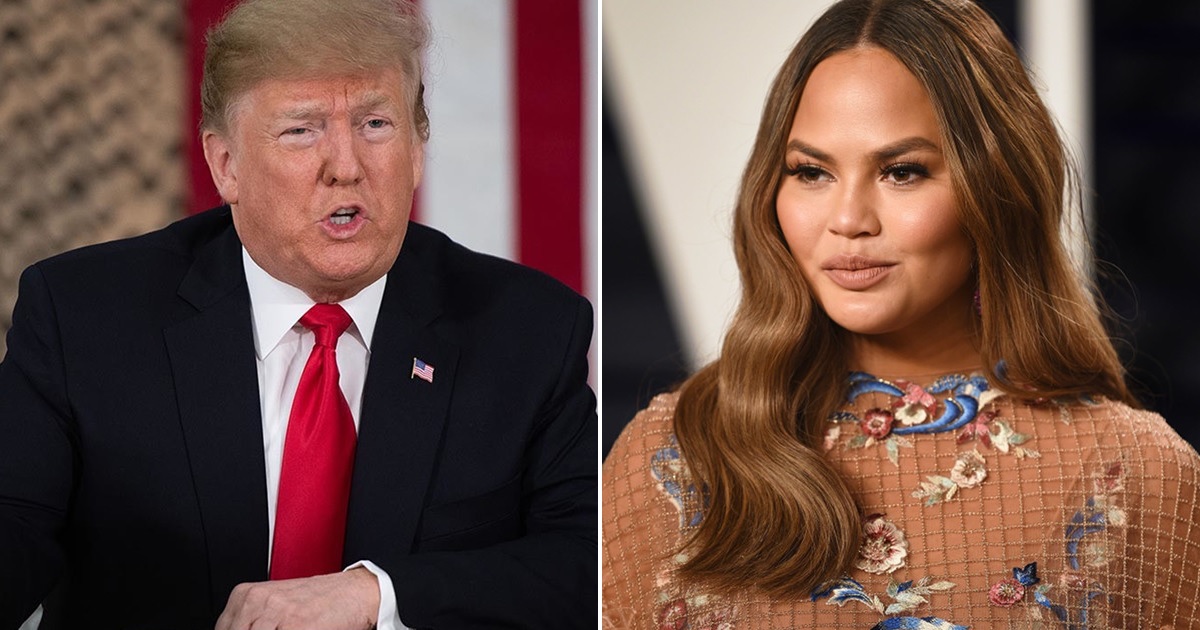 An impassioned MSNBC town hall about criminal justice reform led to a Twitter battle between President Trump and Chrissy Teigen. And of course, it was Queen Chrissy who sat on the Twitter throne with just three words.

lol what a pussy ass bitch. tagged everyone but me. an honor, mister president.

Why was Teigen calling the president a “p***y ass bitch” at 12 in the morning, you ask?

In a late-night Twitter tirade on Sunday night, Trump lashed out at Teigen and John Legend after Legend appeared on Lester Holt’s Justice for All MSNBC series, a special report about the criminal justice system.

Legend did a segment discussing his organization, Free America, which aims to “amplify the voices of individuals impacted by the criminal justice system and those who are working to change it.”

But grumpy Trump felt the report failed to give him credit for passing the First Step Act, a law he signed December that gives nonviolent inmates an opportunity to shorten their sentences.

And like a toddler throwing a tantrum, he tried to come for Legend and his wife Teigen—who wasn’t even mentioned during the report.

“Guys like boring musician @johnlegend, and his filthy mouthed wife, are talking now about how great it is – but I didn’t see them around when we needed help getting it passed,” he wrote in the extended Twitter thread.

When all of the people pushing so hard for Criminal Justice Reform were unable to come even close to getting it done, they came to me as a group and asked for my help. I got it done with a group of Senators & others who would never have gone for it. Obama couldn’t come close….

….A man named @VanJones68, and many others, were profusely grateful (at that time!). I SIGNED IT INTO LAW, no one else did, & Republicans deserve much credit. But now that it is passed, people that had virtually nothing to do with it are taking the praise. Guys like boring…..

….musician @johnlegend, and his filthy mouthed wife, are talking now about how great it is – but I didn’t see them around when we needed help getting it passed. “Anchor”@LesterHoltNBC doesn’t even bring up the subject of President Trump or the Republicans when talking about….

The tweet apparently made its way down Teigen’s timeline and she clapped back with her epic “p***y ass bitch” response.

In separate tweets, Teigen chided the president for his “9th meltdown of the day” and was confused as to why he even brought her up when she didn’t appear on MSNBC’s report.

Luna, remember the night before your first day of school? When mommy was making your sign and the pussy ass bitch president had his 9th meltdown of the day pic.twitter.com/ZFZHJYrDPG

the absolute best part of his tweet is I literally didn't speak in the special, nor was I mentioned. I'm cackling at the pointless addition of me because he cannot not be a bitch pic.twitter.com/9ZkV7bh4FA

Legend also jumped in and shaded the president for looking for praises in an MSNBC report.

Imagine being president of a whole country and spending your Sunday night hate-watching MSNBC hoping somebody–ANYBODY–will praise you. Melania, please praise this man. He needs you.

Trump has moved on to tweeting about other topics and has yet to respond to Teigen and Legend.

However, Chrissy Teigen, #FilthyMouthedWife, and #TeamChrissy were all trending topics so he may add a few more tweets at some point in the day.

We should note that Lester Holt did, in fact, give Trump credit for the First Step Act in the Dateline episode that aired before the special Justice for All report. They aired footage of Trump signing the bill and explained its intention.

However, he did add that bill mostly helps inmates in federal prisons and does little for those in state and local facilities.