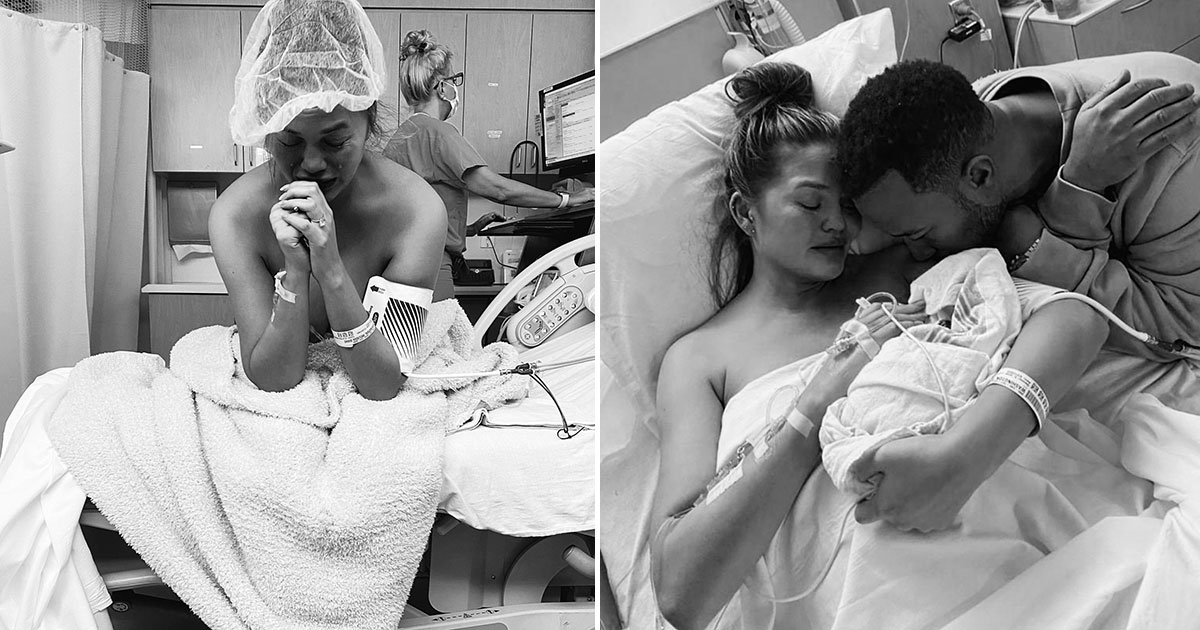 Chrissy Teigen has revealed that she suffered a miscarriage after being hospitalized due to complications with her pregnancy.

Chrissy took to social media Thursday (Oct. 1) to share the devastating news that she and her husband, John Legend, lost their baby, whom they’d named Jack.

“We are shocked and in the kind of deep pain you only hear about, the kind of pain we’ve never felt before,” she wrote. “We were never able to stop the bleeding and give our baby the fluids he needed, despite bags and bags of blood transfusions. It just wasn’t enough.”

“We never decide on our babies’ names until the last possible moment after they’re born, just before we leave the hospital. But we, for some reason, had started to call this little guy in my belly Jack. So he will always be Jack to us,” her statement continued.

“Jack worked so hard to be a part of our little family, and he will be, forever To our Jack—I’m so sorry that the first few moments of your life were met with so many complications, that we couldn’t give you the home you needed to survive. We will always love you.”

She added: “Thank you to everyone who has been sending us positive energy, thoughts and prayers. We feel all of your love and truly appreciate you.

“We are so grateful for the life we have, for our wonderful babies Luna and Miles, for all the amazing things we’ve been able to experience. But everyday can’t be full of sunshine. On this darkest of days, we will grieve, we will cry our eyes out. But we will hug and love each other harder and get through it.”

The sad news comes after Teigen was hospitalized over the weekend due to pregnancy complications. She’d previously said she was on “super serious” bed rest.

“We all know I’ve been on bedrest for a few weeks, and that’s super serious bedrest: get up to quickly pee and that’s it, I’d take baths twice a week and no showering. But I was always, always bleeding. And I’m about halfway through pregnancy, and the blood has been going on for like a month,” the 34-year-old said in her Instagram Stories Sunday (Sep. 27). “We’re talking more than your period, but definitely not spotting. A lot of people spot and it’s usually fine. Mine was a lot.”

She explained that every time she would get up to go to the bathroom, there’d be a lot of blood. “But honestly, just laying there would be blood,” she said. “But today, the big difference was that it kind of was like if you were to turn a faucet onto low and leave it there.”

“It’s so weird because I feel really good,” Chrissy shared. “I’m usually at my happiest pregnant, mood-wise. I feel happier than I do not pregnant. That’s why it’s so hard for me to come to terms with. It was at the point today where it was never stopping bleeding. That’s obviously very bad,” she noted.

Chrissy went on to say that her son was fighting, and that her placenta was “really, really weak,” but “the baby is so healthy, growing stronger than Luna or Miles. He moves a lot. He’s moved so much earlier than they ever did. He’s like a rollie pollie,” she said.

“Basically he’s the strongest, coolest dude in the sh**tiest house. His house is just falling apart. It didn’t have a good foundation to begin with, though. He didn’t have the strongest chance at the very, very beginning.”

Chrissy and John announced that they were expecting their third child last month in John’s music video for the song “Wild.” They’re already parents to daughter Luna, 4, and a 2-year-old son, Miles.

John confirmed the news during an interview with Today, calling it a “little quarantine surprise.”

“It was a surprise. A little quarantine surprise, I guess you could say,” John said. “But we’re very excited, and we’re grateful for all the well-wishes we’ve gotten from people all around the world. Thank you so much.”

Our thoughts and prayers go out to Chrissy Teigen and John Legend.