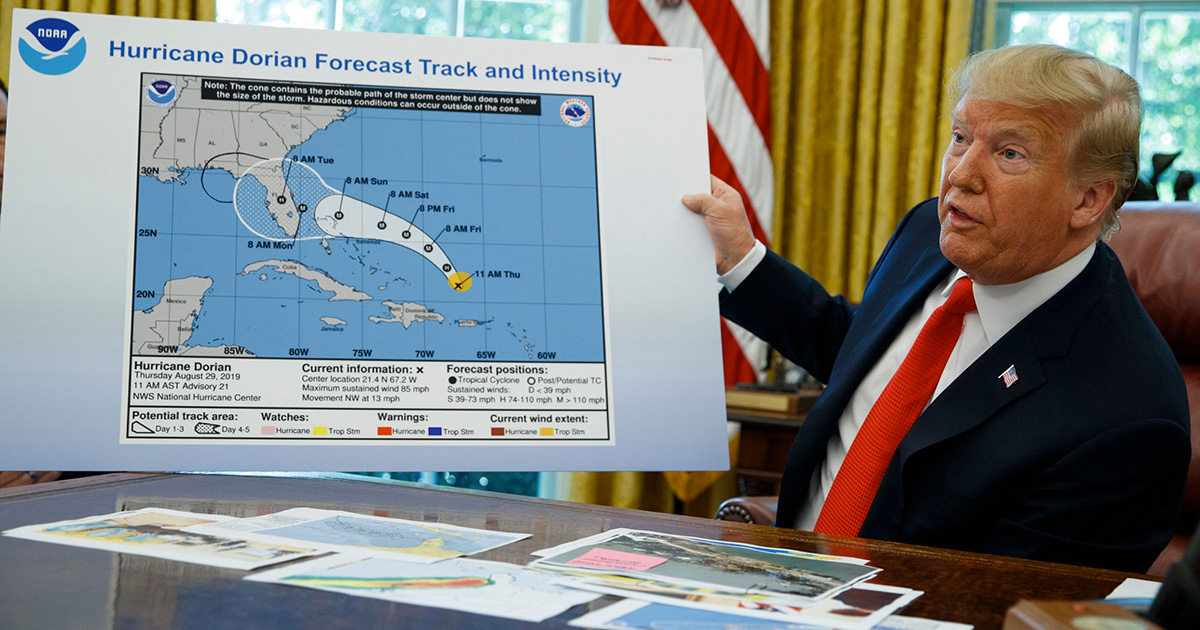 President Donald Trump has come under fire for allegedly using a Sharpie pen to alter a Hurricane Dorian forecast map to falsely show that the powerful storm was on track to hit Alabama in a desperate attempt to cover up a bad tweet.

Trump tweeted on Sunday (Sep. 1) that Alabama was among the states in the direct path of Hurricane Dorian. Like most things that come out of his mouth (and on Twitter), that was a blatant lie.

In addition to Florida – South Carolina, North Carolina, Georgia, and Alabama, will most likely be hit (much) harder than anticipated. Looking like one of the largest hurricanes ever. Already category 5. BE CAREFUL! GOD BLESS EVERYONE!

It didn’t take long for officials to debunk Trump’s claims, with the National Weather Service office in Birmingham saying in a follow-up tweet exactly 20 minutes later: “Alabama will NOT see any impacts from #Dorian.”

Alabama will NOT see any impacts from #Dorian. We repeat, no impacts from Hurricane #Dorian will be felt across Alabama. The system will remain too far east. #alwx

Spann added, in response to a follower’s inquiry about his political motives: “I have zero interest in politics. Dorian will not affect Alabama in any way. That is not a political statement.”

Alabama will not be impacted by Dorian in any way. https://t.co/QKq10l6SXA

I have zero interest in politics. Dorian will not affect Alabama in any way. That is not a political statement.

After Trump’s Tweet was fact-checked by Jonathan Karl of ABC World News, the president lashed out, calling Karl’s story a “phony hurricane report by a lightweight reporter.”

Such a phony hurricane report by lightweight reporter @jonkarl of @ABCWorldNews. I suggested yesterday at FEMA that, along with Florida, Georgia, South Carolina and North Carolina, even Alabama could possibly come into play, which WAS true. They made a big deal about this…

Because Trump is a person who refuses to admit when he’s wrong (Remember, this is the same guy who said he’s never had to ask God for forgiveness), the Cheeto-in-Chief doubled down on his false claim, tweeting—with zero references and contrary to official government forecasts—that “under certain original scenarios, it was in fact correct that Alabama could have received some ‘hurt.'”

….when in fact, under certain original scenarios, it was in fact correct that Alabama could have received some “hurt.” Always good to be prepared! But the Fake News is only interested in demeaning and belittling. Didn’t play my whole sentence or statement. Bad people!

In other words, he said what he said.

Too bad what he said is a damn lie. And he appears to be going as far as falsifying official weather reports to support his incorrect claims.

During a briefing Wednesday (Sep. 4) in the Oval Office, President Trump proudly showed off a map showing what he described as the initial forecasted path of Hurricane Dorian.

But…Wayment. What’s that extra black line at the bottom of Georgia and Alabama? 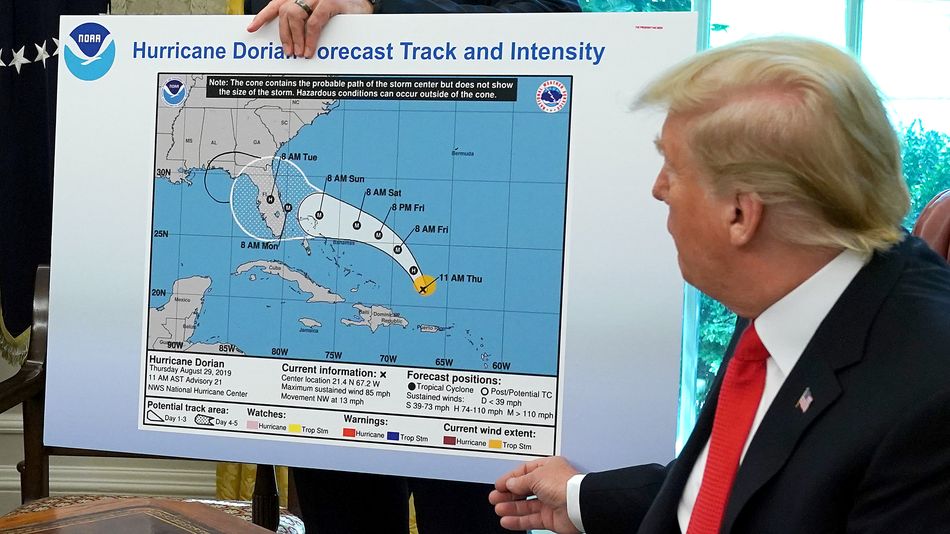 Did this MF just draw an extra line around the original path to cover Alabama?! Just so that his fake azz tweet would seem more legitimate? 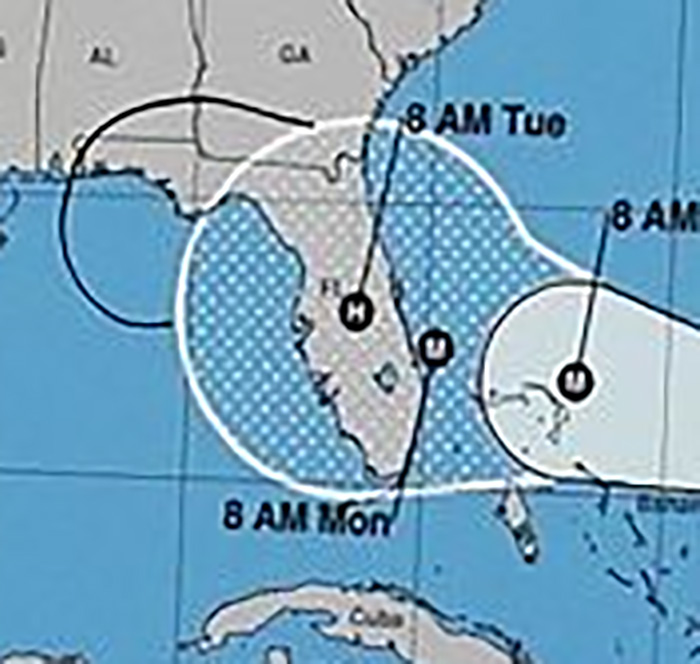 Is this real life? Are we living in an alternate universe? WHY IS THIS MAN RUNNING OUR COUNTRY?!

Of course, our salmon-colored leader will never admit to using a Sharpie to alter a weather report to cover up a blatant lie, so it was no surprise to hear that he’s denying doing so and acting like he has no idea what the hell is going on.

For what it’s worth, federal law states that it is illegal to use a doctored National Weather Service forecast in an official capacity, as weather journalist Dennis Mersereau pointed out, and that’s exactly what our Tanned Tyrant seemingly did.

The law states: “Whoever knowingly issues or publishes any counterfeit weather forecast or warning of weather conditions falsely representing such forecast or warning to have been issued or published by the Weather Bureau, United States Signal Service, or other branch of the Government service, shall be fined under this title or imprisoned not more than ninety days, or both.”

It is a violation of federal law to falsify a National Weather Service forecast and pass it off as official, as President Trump did here.

While answering questions form journalists at a separate event about the ongoing opioid cris on Wednesday, a reporter asked Trump if he knew anything about the map being altered.

“No,” the president replied. “I just know, I know Alabama was in the original forecast. They thought they would get it as a piece of it. It was supposed to go — actually we have a better map than that which is going to be presented where we had many lines going directly, many models, each line being a model, going directly through. And in all cases, Alabama was it.”

He said there was a “95 percent probability” that Dorian’s path would go through Alabama, “but then it made that right turn that a lot of people didn’t expect.”