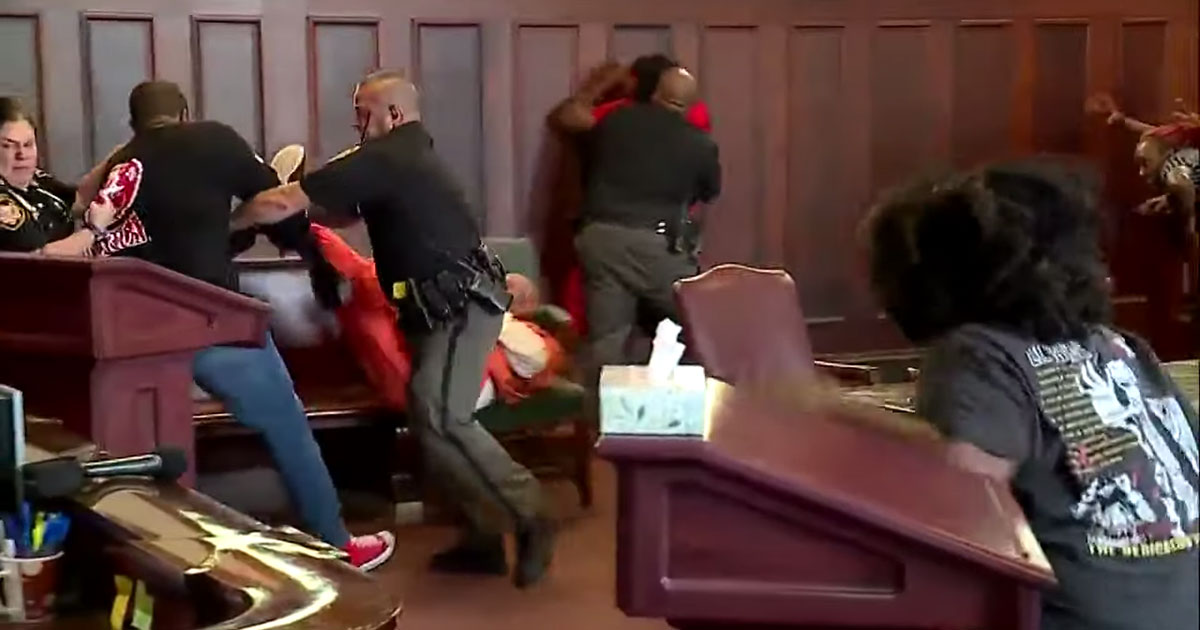 The adult sons of a woman who was stalked and killed attacked the man who murdered her during his sentencing in court, and the whole thing was caught on video.

WFMJ reports that 62-year-old Dale Williams Sr. was in a Youngstown, Ohio courtroom Thursday (Jul. 11) to be sentenced after pleading guilty for aggravated murder in the death of 46-year-old Elizabeth Pledger-Stewart.

As Pledger-Stewart’s 14-year-old daughter was preparing to read a victim impact statement to the judge, the woman’s two sons made a beeline for Williams and beat him up.

The video footage, shot by Youngtown CBS affiliate WKBN, begins right after the two brothers, Anthony Dees and Jerome Stewart, broke through a barricade of security guards to get to their mother’s handcuffed killer.

The video shows 30-year-old Dees dragging Williams to the ground by his feet, and while deputies are wrestling with him, 23-year-old Stewart punches Williams in the head multiple times.

“You killed my mama, bruh,” Stewart said to Williams as police cleared the courtroom. “She took care of me. Nobody else did.”

Both brothers were arrested and charged with assault and obstructing official business. The judge sentenced them to serve 30 days in jail for contempt of court, CNN reported.

Williams ran Pledger-Stewart off the road and crashed the van he was driving into the back of her car, then shot her multiple times when she got out of the vehicle, killing her in broad daylight, witnesses said.

One witness told WFMJ that she saw Williams stand over Pledger-Smith and shoot her “five or six” times.

“I’ve never seen nothing like this early in the morning,” the witness, who didn’t want to be identified, said. “The next thing you know, five or six shots, he stood over the lady and just shot her.”

Williams surrendered to Youngstown Police officers when they pulled up to the crime scene.

Williams and Pledger-Stewart had been in a relationship, and just 11 hours before she was killed, Pledger-Stewart filed a police report saying Williams was “upset and was accusing her of seeing someone else.” He also told her that he was “going to catch her in the streets.”

Although his sentencing was postponed, Williams still faces 23 years to life in prison.