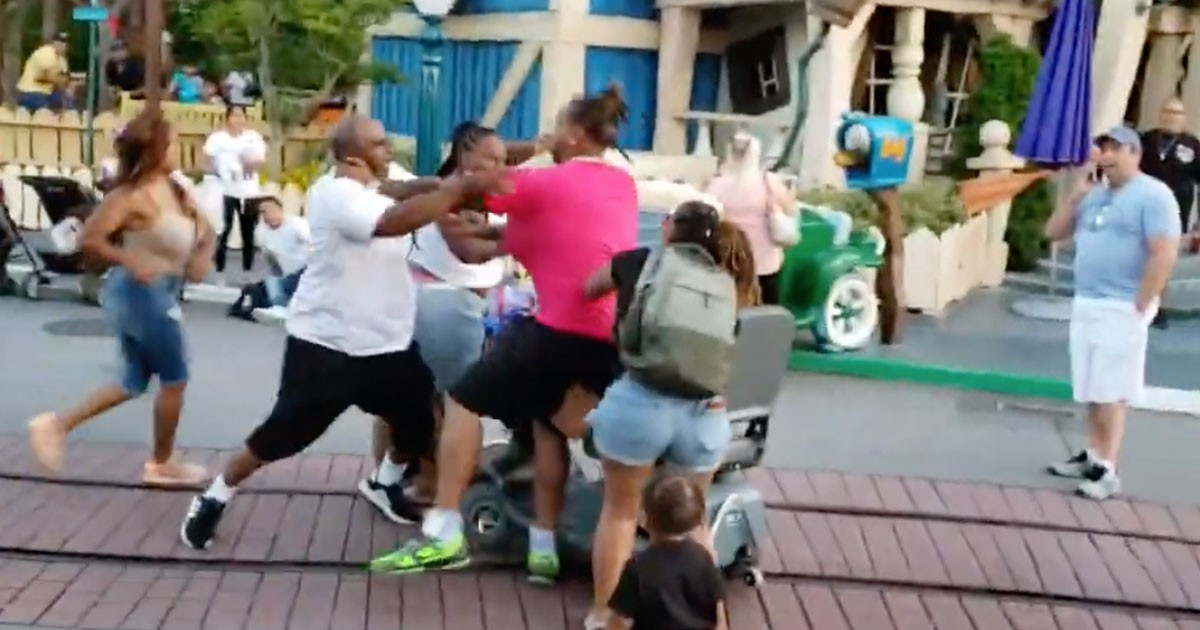 Video footage showing a family engaged in a massive brawl in Mickey’s Toontown at Disneyland has gone viral on social media.

The video—which has amassed millions of views on YouTube, Facebook and Twitter—starts out with a man in a pink shirt arguing with a woman in a white tank top. After the woman spits in the man’s face, he retaliates by repeatedly punching her.

The man with the woman in the white tank top then jumps in and the two men exchange blows while their children cry in the background and parkgoers look on in horror.

As the fight escalates, the man in the white shirt steals on the woman with the man in the pink shirt when she tries to break up the fight, and complete chaos ensues as everyone starts throwing punches indiscriminately.

The man in the pink shirt is seen grabbing the woman in the white tank top by her hair as he punches her in the head.

An older woman in the family can be seen getting up from her mobility scooter, and when she tries to get in the middle of the free-for-all, she gets knocked to the ground and is unable to get back up without help.

The fight briefly calms down as the family tends to the older woman, but it starts right back up after the man in the pink shirt punches the woman who started the fight and throws her to the ground.

“Wassup! I’m ready to go to jail tonight!” the man in the pink shirt yells as he paces around the scene.

After someone in their group alerts the man in the pink shirt that the woman with him (presumably his girlfriend) is the one who hit his mother (the lady in the scooter) and knocked her to the ground, he unleashes a brutal attack on the woman, hitting her with several blows until she collapses as he shouts “You hit my mama b**ch?!”

At that point, park security and other bystanders step in to help break the fight up, and a small group of men tackled the guy in the pink shirt and pinned him to the ground.

The video ends after the man gets up and threatens whoever put him in a headlock. “Who choked me out?!” he asks angrily. “Don’t you ever put your hands around my neck, you b**ch a** n***a, whoever the f**k you is!”

Police said all parties involved were members of the same family, but they were unable to make any arrests due to them being uncooperative and unwilling to press any charges against one another.

Police also said there was no video available when the incident was reported, but now that they are aware of the video that has since gone viral, detectives will be following up to see if any criminal charges can be filed.

A spokesperson for Disneyland confirmed the fight took place Saturday evening (Jul. 6) and the entire group was kicked out of the park.

“Any type of violence is inexcusable and will not be tolerated,” the spokesperson said. “Those involved were immediately removed from the premises and turned over to the Anaheim Police Department.”