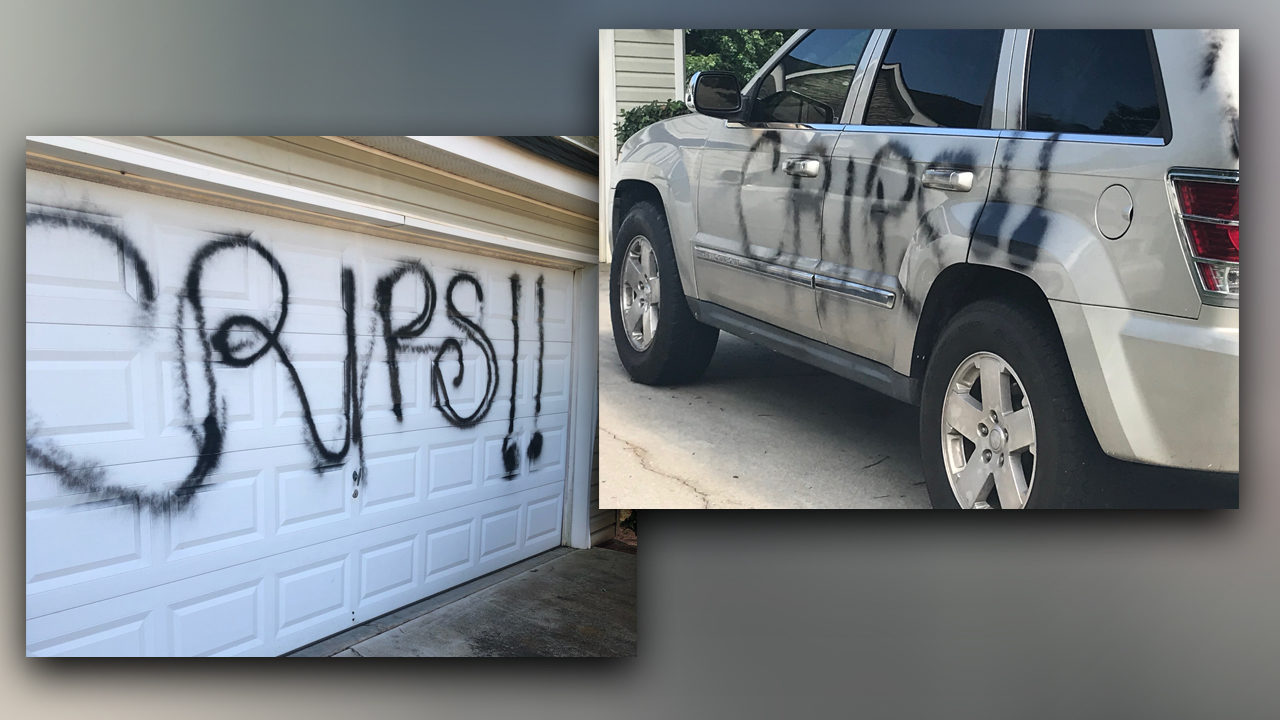 A suburban neighborhood in Georgia was reportedly “vandalized” with “gang graffiti” … and we can’t help but give this whole thing the side-eye.

According to WSBTV News, residents of a neighborhood in Newton County, which is about 45 miles outside of Atlanta, “woke up” to gang-related graffiti spray-painted on at least three homes and one car.

“I couldn’t believe it when I saw it ’cause we don’t have that in this neighborhood. It’s quiet out here,” neighbor Mary Smith told a Channel 2 reporter.

“When I got home, I was just puzzled. I was really broken that something like this would actually happen here,” said another neighbor, who wished to remain anonymous.

And here’s where things get … interesting.

The Channel 2 News reporter said the man asked the news station to hide his face “for safety.”

He said he had been out of town last weekend when he received a call from his son saying that someone had spray-painted the word “Crips” on their garage and their car.

Another man said someone broke into his home and stole valuables.

Police also said there was surveillance footage, but they haven’t identified any suspects, though we here at Gossip On This have an idea who it was*.

Seriously … have YOU ever heard of the Newton County, Georgia Crips?

And Twitter seems to agree with our skepticism too … so much so that the word “Crips” has been trending ever since this major breaking news story was revealed.

EXCLUSIVE PHOTO OF THE CRIPS THAT DID IT! pic.twitter.com/mdAQPE50RA

Someone doodled "Crips" on a garage like it was a notebook and they had an unrequited crush on the gang. pic.twitter.com/VP2kmIlAkB

LMFAOOOOOOOO BITCH CRIPS DID NOT SPRAY PAINT YOUR GARAGE AND HONDA CROSSOVER IN JANKY CURSIVE JUST LOOK FOR ANY KID NAMED COLE IN UR NEIGHBORHOOD, IT WAS DEF HIM https://t.co/qgW34e0RVV

The Crips came thru and spray painted “Crips” on everything???

crips out in the suburbs practicing their cursive tagging. pic.twitter.com/Uql9dYoj2f

That swirly “S” at the end is definitely the mark of the Crate & Barrel Crips. Not to be confused with the Restoration Hardware Crips. https://t.co/W1AZubrhY4

I don’t support vandalism but if The Crips have evolved into cursive writing with exclamation points!! I’m supporting that ?????? #nicetry #cripsdontwritecripswithpunctuations https://t.co/rQyTKxvRo9

Crips sign their own names and write in cursive? Solid. https://t.co/SWk7JIP70N

I refuse to believe that any set of crips is running around tagging “crips” ??? https://t.co/dzbAROSjey

Brrrrr it’s CRIPS!! In here! Must be some CRIPS!! In the atmosphere! https://t.co/zAcxRSrPwM

We all know who spray painted
“ crips “ pic.twitter.com/1eWwWABLmb

Found the crips that are responsible for that graffiti ??? pic.twitter.com/NwveKBwTqo

I represented lots of Bloods and Crips as an LA public defender during the heyday and hired experts on the very question of authenticity. I’m gonna lean all the way in… this isn’t gang graffiti. https://t.co/9j7Ad95wl8

*It was Mr. Anonymous’s son and/or his dumb friends.