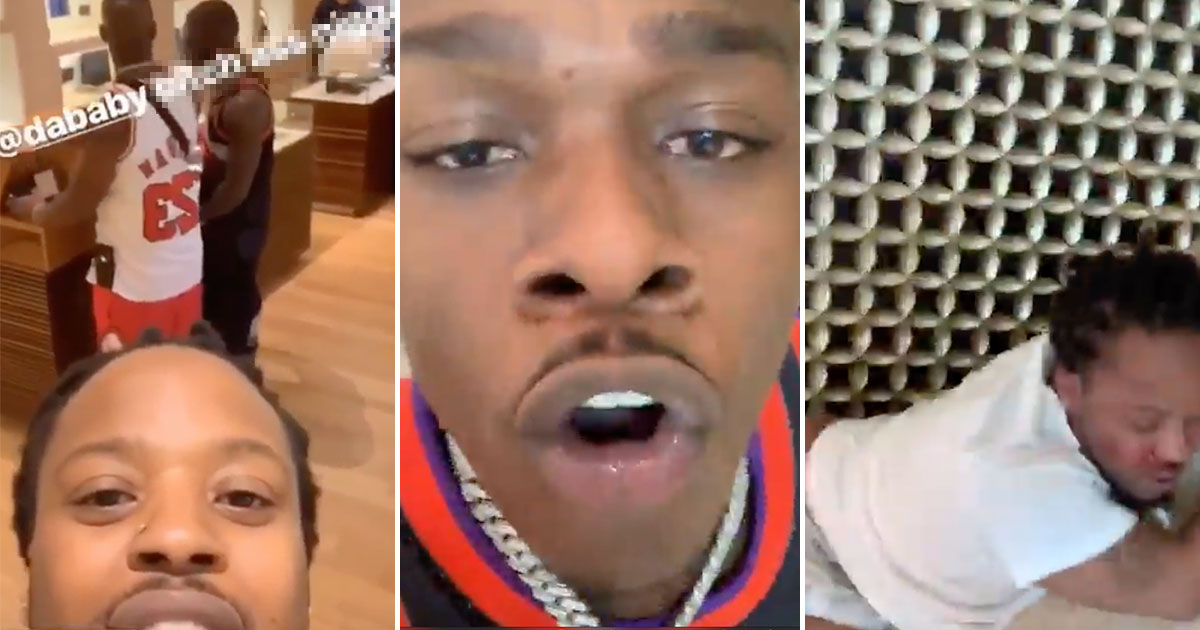 A Charlotte rapper who decided to test DaBaby’s gangsta ended up with a bloody nose and on the ground with his pants below his waist … and the whole thing was captured on video.

Based on the footage, DaBaby (real name: Jonathan Kirk) appeared to be minding his business while shopping at the Louis Vuitton store in South Park Mall when another man, later identified as Charlotte rapper Cam Coldheart, accosted him.

“You a bitch. Y’all, look at the n***a DaBaby,” Coldheart can be heard saying. “He walkin up on me like he about to do some sh*t.”

The footage then skips to DaBaby confronting the man before a brief scuffle ensues.

The next part of the video shows the man on the ground outside the store, bleeding profusely from his nose and with his pants down, exposing his underwear.

Watch the videos (which DaBaby re-posted on his own Instagram) below:

For his part, Cam Coldheart is ranting and raving on social media about how he was jumped by DaBaby’s security, contradicting the “Suge” rapper’s claims that it was a one-on-one fight.

I asked security how many ppl jumped on me in Loui V??? HE AINT GOT TO LIE. JUST HIM??????? DOLO???? THIS THE PROOF YOU ALL CAP @dababy Police bag there asking for statements I just want my mf belt No rats YOU TELLIN YO FANS JUST YOU?? DOLO?? YOU PEE WEE A** N***A. I DEFINITELY CONNECTED ON YO BITCH A** FIRST THROW AND YOUR SECURITY JUMPED IN. PERIOD.

Y’all hit like hoes!! I was just scratched up and tired, I sag ANYWAY YOU BEEN CAP YOU STIIL CAP. That’s gone show itself sooner or later yo bitch a**. No police statements made way to street da dat told her I ain’t wanna talk. Check on dat

So these niggas surround me on both sides in Loui V while im at da counter buyin a belt. Little Jon Jon @DaBabyDaBaby and his hired security licensed to protect him and kill wanna jump me so I gotta fight his big ass… https://t.co/20wWMdCDNI

Walkin up wit cameras out and shit tryin to do anything for some clout you lil bitch ass boy @DaBabyDaBaby you everywhere wit licenses to kill SECURITY don’t try to put a chain on em and shit like he just a homie.… https://t.co/f2dnzJOgg8

Quit CAPPIN you bitch ass boy you and yo security nigga JUMPED ME for like 5 minutes! Ima mother fuckin SLIVER BACK. Dat blood from scratch under my nose y’all bitch ass niggas SCRATCHIN. DO I LOOK HURT???? IM STIL… https://t.co/korsoq9zPX

I asked security how many ppl jumped on me in Loui V??? HE AINT GOT TO LIE. JUST HIM??????? THIS THE PROOF YOU ALL CAP??? YOU TELLIN YO FANS JUST YOU?? YOU PEE WEE ASS NIGGA. I CONNECTED ON YO BITCH ASS AND YOUR… https://t.co/sKK5AO1xOq

Surround me jump me. All dem hits.. and Im good. These niggas scratching? dats cool. Hit like hoes Much love and succes to y’all playboy https://t.co/DhJjtmqHzt

Meanwhile, fans on Twitter are applauding DaBaby for singlehandedly ending clout-chasing, as one person put it.

Me watching da baby talk shit and follow through with action. pic.twitter.com/3lo4iw6kmA

Da Baby jacked that nigga phone and recorded him with his pants down. With his OWN PHONE pic.twitter.com/lkJRhVJV1I

That man walked up on Da Baby and ended the video like this. pic.twitter.com/7TBoEEqkNN