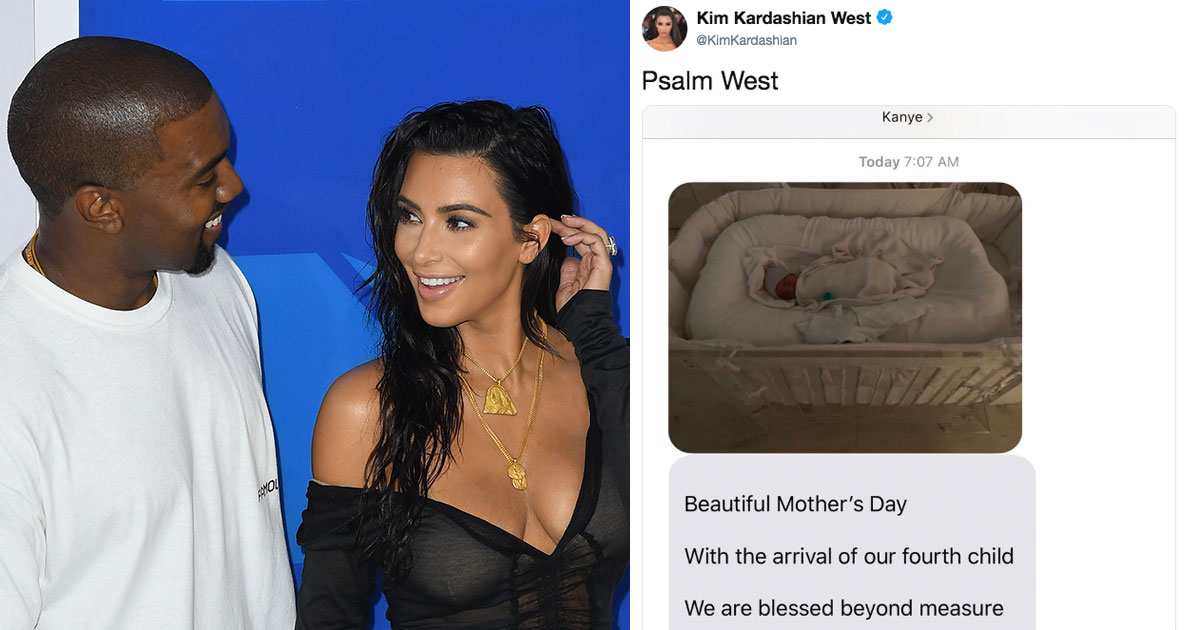 Kim Kardashian and Kanye West recently welcomed their fourth child, a son, via surrogate, and we’ve all been waiting to see what they were going to name their second boy.

With names like North West, Saint West and Chicago West, we already knew we were in for a treat. And on Friday (May 17), a week after the little guy’s arrival, Kim and Kanye revealed the first photo of their newborn son, while also announcing his name: Psalm West.

Kim shared a photo of Baby Psalm via a screenshot of a text from Kanye, who wrote: “Beautiful Mother’s Day With the arrival of our fourth child We are blessed beyond measure We have everything we need.”

News of Kimye naming their fourth child Psalm quickly became a trending topic on Twitter as people couldn’t help but make jokes and post hilarious memes about the unusual moniker.

“Kanye West is so wild with these baby names,” one Twitterer wrote. “Named after one of the most important books in the bible. I cannotttttttt.”

“At least they didn’t name the baby Deuteronomy,” another Twitter user added, while another user tweeted: “Psalm West sounds like the location of a new desert music festival that costs $1,000 a ticket.”

One person joked: “Kim Kardashian and Kanye West have named their newborn Psalm West. I have only one question. Is it a hymn or a her?”

Psalm West?! I am deadddddd.

Loooooool, Kanye West is so wild with these baby names.

Named after one of the most important books in the bible. I cannotttttttt ??? https://t.co/SaluIAzH1o

Psalm West sounds like the location of a new desert music festival that costs $1,000 a ticket

Kim Kardashian and Kanye West have named their newborn Psalm West. I have only one question.

I’m a little disappointed in the name Psalm West.

I was hoping for Wild West

kim: We’ll name him… Psalm West
midwives and doctors in the room: pic.twitter.com/YCxYTPY365

Kanye: everyone open to psalms 12

sister: Kim & Kanye had their baby

Me laughing at Psalm West as though my fave didn’t name her daughter after a color and a plant pic.twitter.com/Rrg8827EC1

Psalm west wondering why kim and Kanye couldn't just give him a normal ass name pic.twitter.com/IBnxpbSdlR

Kim Kardashian and Kanye West have had a fourth baby named Psalm West but could have named him after these UK parliamentary constituencies. pic.twitter.com/uiOpbYbaf1

God & everyone else who knows how she got famous: pic.twitter.com/4p9lBDYHcC

everyone: "imagine naming your child Psalm West, these celebrities have lost their damn minds."

Psalm West:4 “Thou shall not give thy baby a normal name, in Yeezus we pray. Amen”#Psalmwest pic.twitter.com/U59APaBNAB

Psalm West during his first night at the new crib pic.twitter.com/6maxkP6xfX