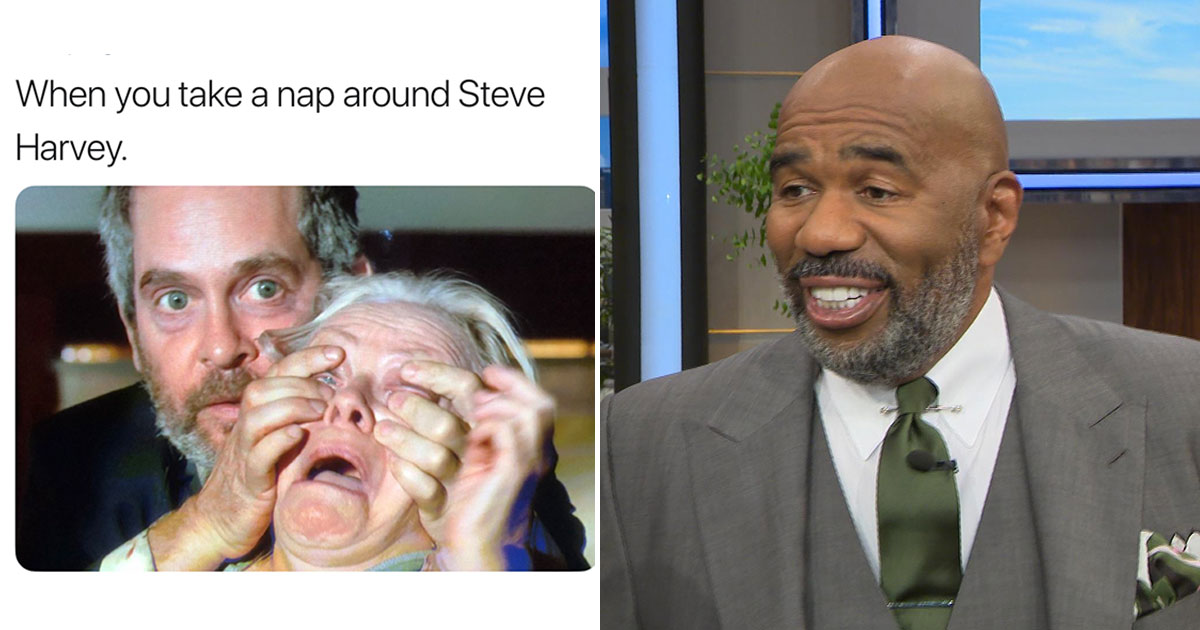 Steve Harvey was clowned on Twitter the other day for basically saying that people who sleep eight or more hours a day are destined for a life of poverty and despair.

An old clip from Steve’s daytime talk show recently resurfaced and started circulating on social media showing him suggesting that those who desire to achieve great wealth should cut back on the ZZZ’s … because sleeping any more than eight hours a day is strictly for poor people.

“Rich people don’t sleep 8 hours a day! That’s a third of your life! It ain’t but 24 hours in a day, you CAN-NOT be sleep 8 hours a day! You can’t live in L.A. and get up at 8 o’clock in the morning. It’s 11 o’clock on the East Coast. The stock market been open 2 hours! They’re already making decisions about your life! And your ass was sleep!”

Harvey then quoted the Bible:

“The Bible says he who loves to sleep and the folding of hands, poverty will set upon you like a thief in the night!”

Here’s the full clip (for those who like context):

Needless to say, people on Twitter weren’t here for Steve and his absurd theory that wealthy people work harder and poverty is the result of too much sleep.

Peep some of the best (and funniest) reactions below:

When you take a nap around Steve Harvey. pic.twitter.com/LM0VYoHygJ

Steve Harvey needs to shut the fuck about everything, forever. Insufficient sleep has a demonstrably negative impact on blood pressure. Black ppl have the highest rates of hypertension in the world. “They sleep/we grind” mentality is gonna have folks stroking out.

Steve Harvey catches you getting some much needed rest pic.twitter.com/1yztXSrtIt

I don’t care for what Steve Harvey talking about I’m getting my 8hrs of sleep. I’m not married to a scammer that has me working 20 jobs just to keep her happy

whatever Steve Harvey tells you to do, do the opposite.

Steve Harvey said you can’t be successful if you’re sleeping 8 hours a day. And I fucking agree. You need at least 12. 8 hours at night and then 4 hours throughout the day via various naps that range from 15 minutes to 2 hours. A rested hoe is a successful hoe.

Me sleeping in till noon to spite Steve Harvey pic.twitter.com/057Z78PyHv

Steve Harvey talks about money like a poor person. Rich people who invest in the market have brokers working for them. Grinding 24 hours a day isn't productive. Rest is vital. Rich people get plenty of sleep. And I don't like Steve Harvey. https://t.co/cw9lcYSXQ2

Steve Harvey said rich ppl don’t sleep and you broke niggas bout to eat that Shit up. If you don’t take ur dumb ass to fucking sleep.

After he sent Monique off I really don’t see where his word holds weight.

That’s what happens when ur money works for u.

When Steve Harvey hears his alarm clock going off at 3:22am pic.twitter.com/Eg4tfGpdXj

Why would Steve Harvey stand before a body of blk people who already have higher risk of strokes, higher risk of high blood pressure, have one of the lowest heath insurance % & life expectancy.. amongst other things..

& tell them they’ll never be shit
if they sleep 8hrs? Why?

Me after sleeping 8 hours and still got $2.30 in my bank account pic.twitter.com/vw7Qwe2lpU

Rich or poor; be mindful of your time. Don’t let…. idk what to call them so let’s say….. the Steve Harvey’s of the world make you feel bad for allowing yourself have time. Work hard, stay on your shit, and give yourself time.
pic.twitter.com/B8FeqJYy7y

Steve Harvey when he comes home and his kids are sleeping pic.twitter.com/oivZJpB2Mn

We could keep going (there are literally HUNDREDS—if not THOUSANDS—of these tweets), but you get the point by now. Don’t listen to Steve Harvey, y’all. GET YOUR SLEEP!