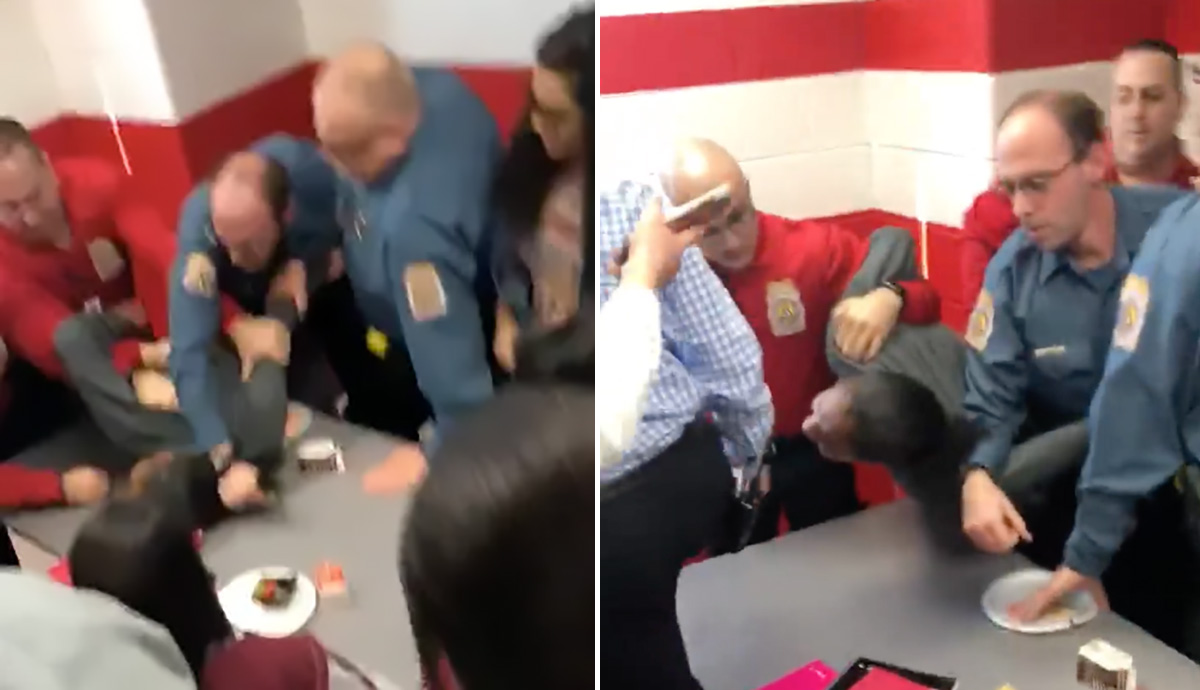 A viral video shows a shocking and violent restraint of a black female student at a high school in Pennsylvania.

The disturbing video—recorded at Hazleton Area High School in Hazleton, Pennsylvania—shows a chaotic scene in which uniformed security personnel attempt to restrain a teenage girl. One security officer, a white male, is seen punching the girl in her legs before grabbing her by the hair and slamming her head onto a table.

A cafeteria full of students can be heard shouting and yelling for the security to stop as the girl’s hair is pulled, her head is being pressed against the table and her arms are twisted behind her back. Another girl, seen at the beginning of the video, can be heard screaming “let me go!” as officers try to restrain her as well.

“The students who were detained were involved in a large altercation with other students in the cafeteria,” Brian Uplinger, the superintendent of the Hazleton Area School District, told BuzzFeed News.

Uplinger said the officers responded appropriately based on their training.

“The security officers and school police officers were within the scope of their training to detain these individuals,” he said. “Had they not, there would have been additional injuries to other students within the cafeteria.”

According to BuzzFeed, Hazleton employs both security guards and school resource officers, so it’s unclear whether the officer in the video is a police officer or a campus security guard.

The video was originally posted on Facebook on Monday (Feb. 4) by Hazleton student Emi Cespedes. She wrote in the caption: “This is wrong on so many levels this man violated her [Principal Rocco Petrone] talk so much sh*t when it comes to keeping the school ‘safe’ wonder how he gonna fix this smh what a school.”

The female student seen being assaulted by the security officers is reportedly 15 years old.

The school district’s police chief Edward Harry told WBRE in Scranton that people are only seeing a small portion of what actually happened.

“They haven’t seen anything about what led up to it and the entire altercation in the cafeteria,” he said. “At that point, the officer had to get that under control immediately. You can see from the snippet of vide there were hundreds of kids in the cafeteria and they were cheering her on yelling and cheering her on. They needed to deescalate that.”

Investigators said the video showed the end of a huge brawl that started as an argument between two female students in the high school’s cafeteria and quickly escalated.

Local news station WNEP reported that at least four students were suspended as a result of the melee, which included three separate fights. Chief Harry said those students will be expelled from the school and could face criminal charges for their roles in the multiple brawls.

Superintendent Uplinger wants parents and students to get all of the facts before passing judgment on how the students were restrained by the officers.

“It’s important to know there are always two sides to every story and it’s really important for parents and students and community members to get both sides of those stories before going to social media,” he said.