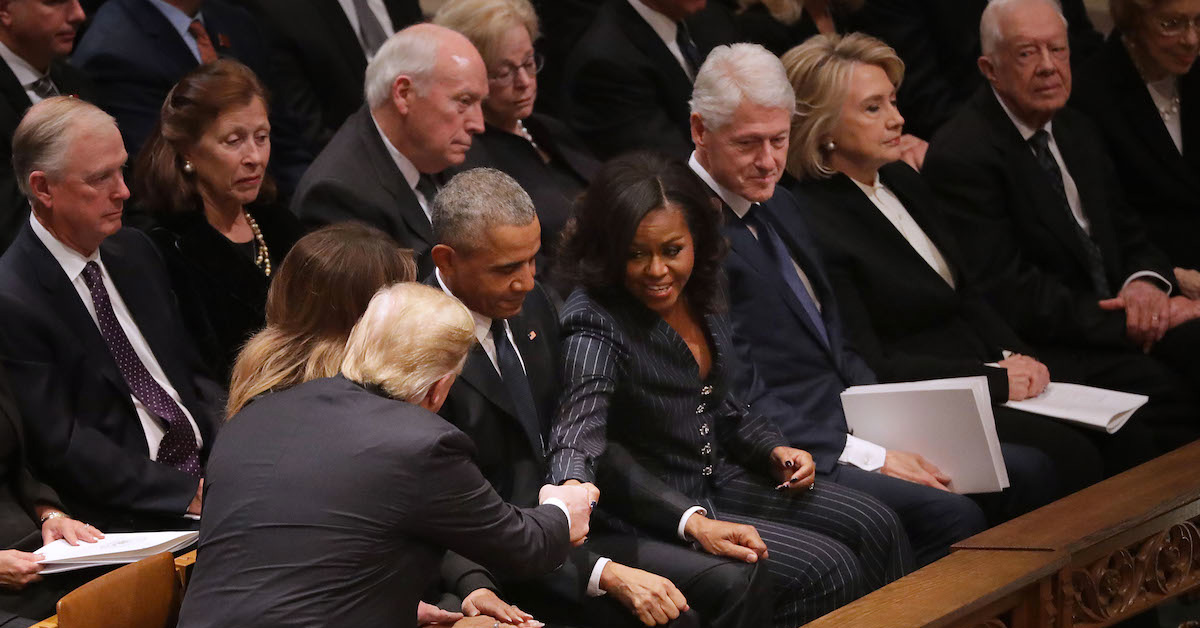 Former President George H.W. Bush’s funeral was held in Washington, D.C. Wednesday, and one of the biggest takeaways from the ceremony was the fact that Hillary Clinton refused to acknowledge Donald Trump’s existence.

Bush’s funeral brought together all of the living former presidents—Barack Obama, Bill Clinton, George W. Bush and Jimmy Carter—as well as our current president, Donald Trump and his wife Melania.

The Trumps were seated in the front row of the Washington National Cathedral right next to the Obamas. As the couple made their way to their seats, Trump shook hands with former president Obama and former first lady Michelle Obama. Melania Trump also shook hands with the Obamas and Bill Clinton and nodded at Hillary Clinton.

But, most noticeably, neither President Trump nor the Clintons appeared to acknowledge one another when the president arrived. Hillary Clinton stared straight ahead when the Trumps arrived, only briefly glancing at Melania, and the president did not even make an attempt to greet his arch nemesis and former 2016 presidential election competitor.

Hillary Clinton aggressively staring straight ahead is the content I didn't know I needed pic.twitter.com/ocCww97MDr

I wish I could commit to anything as hard as Hillary Clinton commits herself to not making eye contact with Donald Trump. She is a whole mood today. #GeorgeHWBushFuneral pic.twitter.com/McVVaf0a90

Hillary Clinton at the funeral when the Trump’s sat down pic.twitter.com/PJOgXJ0gh6

I wouldn’t look at him or shake his hand either.

Much ado is being made over the fact that Hillary Clinton did not acknowledge the presence of trump.

Good for her. Because the funeral wasn't about her, or him. It was for #Bush41 and his family.

For what it’s worth, when former president George W. Bush and former first lady Laura Bush arrived at the funeral, the family greeted the Trumps and all of the former presidents and first ladies.

Other notable moments from the ceremony included George W. slipping Michelle Obama candy, just as he did months ago at John McCain’s funeral:

Former U.S. President George W. Bush slipped Michelle Obama another treat at his father's funeral, just as he did months ago at John McCain's funeral pic.twitter.com/qg9J8DHZ6x

Wednesday morning, Trump said he was “looking forward to being with the Bush family.”

Looking forward to being with the Bush family. This is not a funeral, this is a day of celebration for a great man who has led a long and distinguished life. He will be missed!

“This is not a funeral, this is a day of celebration for a great man who has led a long and distinguished life,” Trump tweeted. “He will be missed!”

Following his funeral service, Bush was flown back to Texas, where he was buried at his presidential library on the campus of Texas A&M University beside his wife, Barbara, and their 3-year-old daughter, Robin.