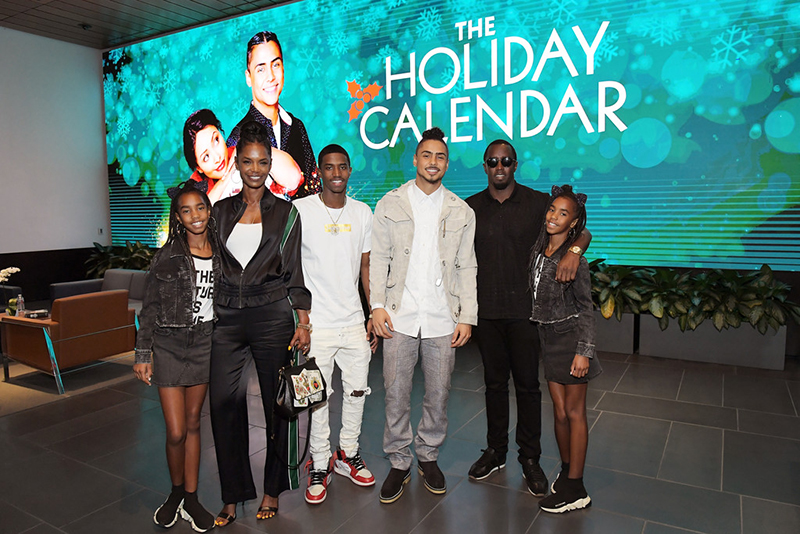 Kim Porter tragically passed away at the age of 47 on Thursday, November 15th. She was the ex-girlfriend of Sean “Diddy” Combs, whom she had three children with, and she was also mother to actor/singer Quincy Brown, her son with R&B singer Al B. Sure that Diddy later adopted and raised as his own.

TMZ reported that Porter’s last public outing with her whole family was the premiere of Quincy’s new movie, the Netflix original film, The Holiday Calendar. A special screening/premiere for the film was held at Netflix’s Headquarters in Los Angeles on October 30th.

Though Kim and Diddy broke up for good in 2007 (after dating off and on for 13 years since 1994), the pair remained close friends and were both on hand to support Quincy’s big night as a family.

The whole family happily posed alongside Quincy in front of the poster for his new movie, which features Quincy and his co-star, actress Kat Graham.

Though Porter’s official cause of death has not yet been revealed, sources close to the former model told TMZ that she had been sick with flu-like symptoms (possibly pneumonia) for several weeks, which would mean that she was sick at the time of Quincy’s movie premiere, however, you can’t tell just by looking at the photos. Porter looked happy and proud to have her family together, supporting her first-born’s success.

The night of the premiere, Quincy shared a video from Netflix HQ on Instagram, writing in the caption: “Simply Happy! Premiere Night! #TheHolidayCalendar.”

In the video, he calls over his little sisters and mom, saying “I’ve got my fam here.” Porter smiles and throws up the peace sign before saying “Yes! So proud of Quincy.” You can hear her laugh at the end of the clip as Quincy says “I’m happy!”

Quincy also posted a photo of him with his mom and sisters as Porter leans in to kiss him on the cheek. He captioned that pic: “The LOVE is right here.”

Porter also posted photos of her and her family on Instagram in a gallery that also included individual pics of Quincy with his adopted father, his biological father, and his movie co-stars.

“When the Whole #Qrew shows up for @Quincy screening of NETFLIX Christmas movie HOLIDAY CALENDAR a must see…” she wrote in the caption. “I laughed I cried I got in the holiday spirit but most of all I got to see @quincy live out his Dream #proudmom #blendedfamily #netflixmovies”

Check out more photos of Quincy, Kim and their family at the premiere of The Holiday Calendar below: