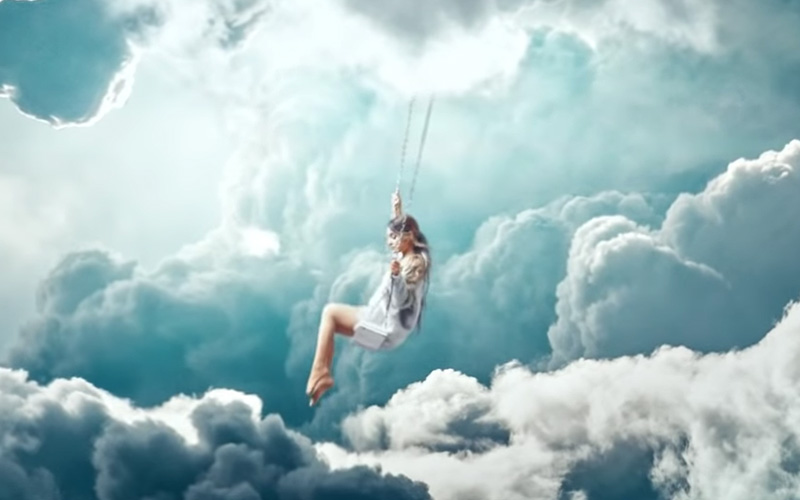 Ariana Grande flies through the clouds in the video for her new single “Breathin.”

The song is the latest cut from Ariana’s fourth album Sweetener. Watch the video below:

Back in August, Ariana explained that the song was about anxiety.

“‘Breathin’ is about breathing and when you’re anxious,” Grande told Jimmy Fallon on The Tonight Show. “It’s about anxiety. You know when you feel like you can’t get a full breath? It’s like the worst feeling in the whole world. It’s just a song about that feeling.”

“Were you having an anxiety attack?” Fallon asked.

“I was having lots of them,” Grande replied. “We were in the studio. We were writing. I was like, ‘I can’t breathe.’ They were like, ‘We’re gonna write this song.’ I was like, ‘Okay, I still can’t breathe, but we’ll write it.’ We made this song. I can kind of breathe now. Progress.”

Ariana Grande has been very open about mental health and her own issues with PTSD and anxiety, which she experienced after the Manchester terrorist attack that killed 22 people at her concert in May 2017.

“It’s hard to talk about because so many people have suffered such severe, tremendous loss,” Grande said to Vogue U.K. this past June. “But, yeah, it’s a real thing. I know those families and my fans, and everyone there experienced a tremendous amount of it as well. Time is the biggest thing.”

Last weekend, Ariana released her breakup anthem “Thank U, Next”—which is an ode to her past relationships with Big Sean, Pete Davidson and Mac Miller, the latter of whom died on September 7th at age 26th of a drug overdose. She performed the song live for the first time on The Ellen DeGeneres show Wednesday (Nov 7), just a few weeks after her split from her former fiancé Davidson.