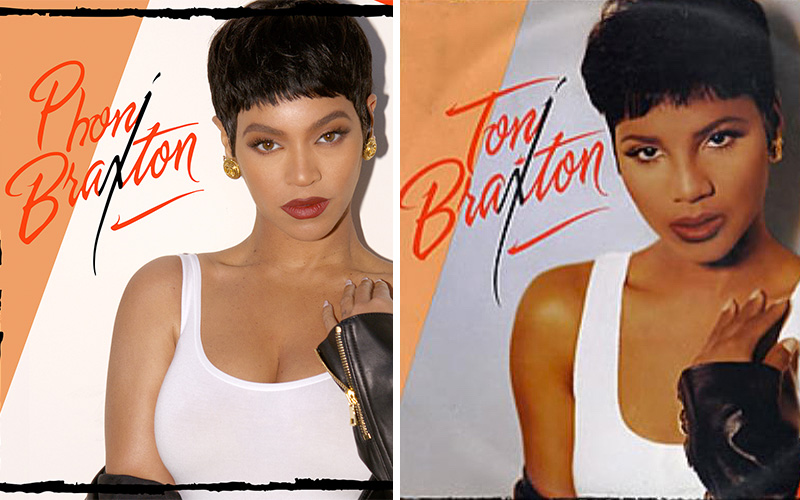 Before Halloween even came, Beyoncé already owned the holiday.

On October 30th, a whole 24 hours before the rest of the world would dress up for Halloween, Queen Bey channeled Toni Braxton by recreating the R&B icon’s self-titled 1993 debut album cover.

Bey shared a number of photos on Instagram showing her dressed up as Braxton, complete with an off-the-shoulder black leather jacket, a white tank top, high-waisted jeans with a gold chain belt and a black pixie wig.

She called herself “Phoni Braxton,” a play on Toni Braxton’s name and also recreated the artwork for “Another Sad Love,” the first single from Toni’s debut album. To say that she slayed would be a complete understatement.

“Sending love and adoration to one of our talented legends,” Beyoncé wrote in the caption of one of the photos on IG. “Thank you for the countless bops. Your tone, your beauty, your range, and your God-given talent is treasured. Loving you always. Have a Happy Halloween my Kings and Queens.”

Braxton was flattered that Beyoncé chose to pay homage to her. After seeing the images, the 51-year-old wrote on Twitter: “Phoni Braxton!? NEVER!!! How do you look better than me on MY album cover? I LOVE IT, Such a superstar! Thanks for the love sis!”

Phoni Braxton!? NEVER!!!
How do you look better than me on MY album cover?
I LOVE IT, Such a superstar!
Thanks for the love sis!
Happy Halloween ?
Who run the world…GIRLS! GIRLS! ????@Beyonce pic.twitter.com/dFSbBrQV8Y

This isn’t the first time Beyoncé has paid homage to a black female performer for Halloween.

Just last year, she dressed up as Lil Kim (above), and back in 2014, she rocked the hell out of a Janet Jackson Rhythm Nation-inspired costume (below).

We can’t wait to see who decides to pay homage to for Halloween 2019!