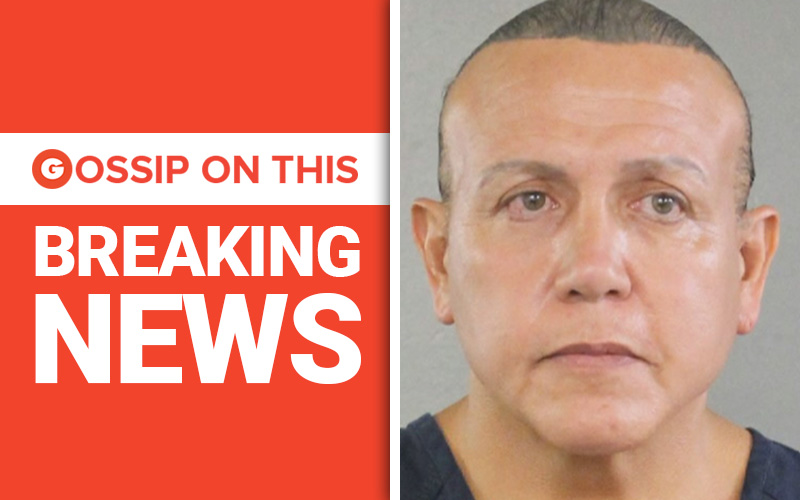 Meet the man who law enforcement has confirmed as the package bomb sender. Cesar Altieri Sayoc Jr. was arrested Friday morning (Oct. 26) in connection with the suspicious packages that were sent across the country to various Democrats and to CNN’s headquarters in New York City.

Sayoc is a 54-year-old resident of Aventura, Florida, but is originally from the Bensonhurst neighborhood of Brooklyn, New York City. He was arrested outside of an auto parts store in Plantation, Florida—a suburb of Ft. Lauderdale.

Sayoc has an extensive criminal background and (SURPRISE!) is a big Trump supporter.

1Cesar Sayoc is a registered Republican and a huge Trump supporter.

According to online records, Cesar Sayoc is a registered Republican.

He reportedly registered with the GOP in Florida in March 2016 and was pictured at a Trump rally that year wearing a MAGA had and proudly holding a “Welcome President Trump” banner.

2The feds seized a van owned by Cesar Sayoc that was covered in political stickers.

As a part of Cesar Sayoc’s arrest, Federal agents seized a van owned by him that is covered in political stickers including images of President Donald Trump and Vice President Mike Pence.

The above photo is a close-up image of one side of the van, taken by Twitter user Mahmud mohamed, shows images with crosshairs over the faces of Hilary Clinton, Michael Moore, CNN’s Van Jones and many others. “I saw this van in Hollywood at a stop light … and thought this was strange,” Mahmud mohamed tweeted.

3Cesar Sayoc has a lengthy criminal history and was charged with making a bomb threat in 2002.

Cesar Sayoc has an extensive criminal background, with arrests in Broward County, Florida dating all the way back to 1991, court records show.

In 1991, Sayoc was charged with third-degree grand theft, which is a felony. That same year, he pleaded guilty to the charges and was sentenced to two years probation.

Sayoc’s own mother sought a domestic violence injunction against him in 1994, according to court records.

In 2002, Sayoc was charged with making a bomb threat in Dade, County Florida and was sentenced to one year of probation. Prosecutors agreed to dismiss the felony charge after he completed the probation in 2003.

Sayoc was also arrested in 2004 on drug charges after he was accused of possession and sale of steroids, including possession of a controlled substance without a prescription, tampering with evidence, filing fraudulent tax returns, criminal use of personal ID info and possession or unlawful issue of a driver’s license. He was sentenced to 18 months of probation that same year after pleading guilty to the charges.

In 2009, Sayoc was charged with operating a vehicle without a valid license, not having insurance and not having a tag light and was fined after pleading guilty to the misdemeanor charges.

In 2013, Sayoc was charged with battery and third-degree grand theft—a felony. He pleaded guilty to the charges in 2014 and was sentenced to probation. While on probation in 2014, he was arrested on a petit theft charge and (of course) violation of probation, which landed him 30 days in jail.

Sayoc was also reportedly arrested in Dade and Palm Beach counties on theft charges in 1992 and 2015.

4Cesar Sayoc once worked as a tour manager for Chippendales.

Cesar Sayoc filed for bankruptcy in 2012 and was working as a store manager at a supermarket in Hollywood, Florida at the time. At one point, he also worked as a tour manager for Chippendales.

In 2014, while on probation for battery and grand theft, court records show he requested permission to travel due to his job as a road manager for Chippendales, International Gold Productions and Caesars Palace Royale Burlesque Show.

5Cesar Sayoc sent suspicious packages containing pipe bombs through the mail to a number of Democrats and Trump opposers.

A suspicious package sent to former CIA Director John Brennan forced the evacuation of Time Warner Center in New York City. Others who received packages included Cory Booker, Kamala Harris, Eric Holder, Debbie Wasserman Schultz, Tom Steyer and James Clapper. A total of 14 packages were sent and no one was injured in the attempted attacks.

The FBI is treating their investigation into Cesar Sayoc as domestic terrorism, and if convicted, he could face up to 58 years in prison.