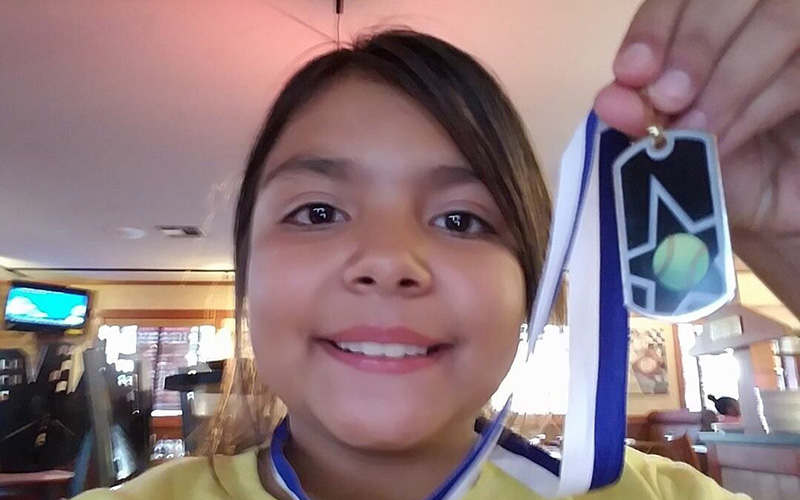 11-year-old Sarah Radney from Georgia has been identified as one of seven people who have lost their lives so far as a result of Hurricane Michael.

1Sarah Radney was killed when the legs of a portable carport struck her in the head after falling into the roof of her grandparents’ home.

In what could only be described as a freak accident, authorities said the powerful winds from Hurricane Michael picked up a portable carport next Sarah Radney’s grandparents’ house Wednesday (Oct. 10) and slammed it back down on the home, and when it landed, one of the legs ripped through the roof, fatally striking the 11-year-old girl in the head.

Michael dropped from a Category 4 hurricane to a Category 1 as it arrived in Georgia, and eventually weakened to a tropical storm, but it still caused havoc in parts of the state, sparking tornadoes, knocking down trees, damaging buildings and creating power outages as it moved towards the Carolinas.

Sarah reportedly had the week off from school for fall break, and she and her 12-year-old brother had been staying at their grandparents’ house near a lake in Seminole County, Georgia since Monday (Oct. 8). They were supposed to return home Thursday morning.

At home in Cairo, about 45 miles away from Seminole County, Sarah’s father and stepmother, Roy and Amber Radney, received the devastating call Wednesday evening that something had come through the roof and hit Sarah and her grandmother (Roy’s mother).

Sarah had been struck in the face, couldn’t breathe and quickly fell unconscious. About 45 minutes later, Amber Radney called her father-in-law, who told her that Sarah had died.

Emergency workers weren’t able to reach Sarah’s grandparents’ home until after midnight because power lines and trees blocked the roads, and when they finally made it, they took Sarah’s grandmother to a hospital, where she was treated for a punctured lung, a broken rib and flesh wounds, Amber Radney said.

Seminole County coroner Chad Smith said Sarah’s official cause of death had not been determined but that it would likely be massive blunt force trauma.

2Sarah’s parents said she loved being around her big family and made everything more fun. She also loved spending the night at her grandparents’ house.

Sarah Radney pictured with her parents and siblings.

Sarah Radney was the youngest of four children until her father remarried and had two more daughters.

Sarah’s father, Roy, and stepmother, Amber, said in phone interviews with the Associated Press that the 11-year-old loved being around her big family and made everything more fun.

“We couldn’t ever get her to spend the night nowhere because she always wanted to be home with her family,” Roy Radney said. “She was 11 years old, but she liked to have fun like a 5-year-old.”

Sarah’s father said she loved to perform, and when the started sixth grade this year, she began playing the trumpet in the middle school band and had recently been in a play with the drama club.

Amber Radney said one of her favorite memories about her stepdaughter is when she made a video of Sarah dancing to Outkast’s “Hey Ya!” in a park about two years ago. “She was so beautiful and she smiled so much that day,” Amber said. “She lit up everything.”

3A family member has started a GoFundMe for Sarah to help with funeral expenses and expenses related to Hurricane Michael.

A woman named Kim Hendrix, who says she’s Sarah’s aunt, started a GoFundMe page Wednesday. She wrote on the page:

“A precious angel gained her wings during Hurricane Michael! My name is Kim Hendrix and Sarah Radney was my beautiful niece that was always happy and smiling when I saw her! Unfortunately Sarah was fatally injured during Hurricane Michael. Her family is devastated and they just do not know how they will be able to give her the memorial service that she deserves.

“They also have some very tough battles to fight as they work through how they will get through this devastation and move forward, especially since there are so many obstacles due to the devastation from the Hurricane (not to mention the emotional battles) I pray that I am able to help my family through the kind hearts of others who wish to contribute to Sarah’s memory and wish to help her big beautiful family!

“Sarah has five sisters, one brother, a loving father, a kind and loving step-mother, a mother, and a loving and caring grandma and grandpa just to name a few of her immediate family and there are so many more! Unfortunately the family is going through a tough time and while money cannot heal or make the situation a happy one, the funds will assist the family in working through some tough battles in the coming days and months.

“We would all appreciate your kind contribution to help but also appreciate prayers for Sarah’s family especially her parents, siblings, and grandparents. Thank you in advance. RIP beautiful Sarah! We love you!

“While I live in Mississippi, I am from Cairo, GA and I’m attempting to raise funds for my niece’s family. Sarah is my niece and the daughter of my brother, Roy Radney. Roy is the son of Elizabeth and Eugene Radney who live in Donalsonville, GA.

“All funds raised will go to the Radney family to assist in funeral expenses and the rest of the family who will be out of work for an undetermined amount of time.”

A #child and a man have been reported dead by #HurricaneMichael, raising the #death toll to two.https://t.co/xHGVfWPCPg

Hurricane Michael is to blame for the death of at least six people, including 11-year-old Sarah Radney and two men from North Carolina who were killed by fallen trees.

Officials said a tree crashed through the roof of a man’s home in Greensboro and trapped him inside. The man’s name has not been released yet, WEAR-TV reported.

The other five lives claimed by Hurricane Michael include another North Carolina man who was killed after a tree fell on his car, as well as four people in Gadsen County, Florida, according to a Facebook post from the Gadsen County Sheriff’s Office.