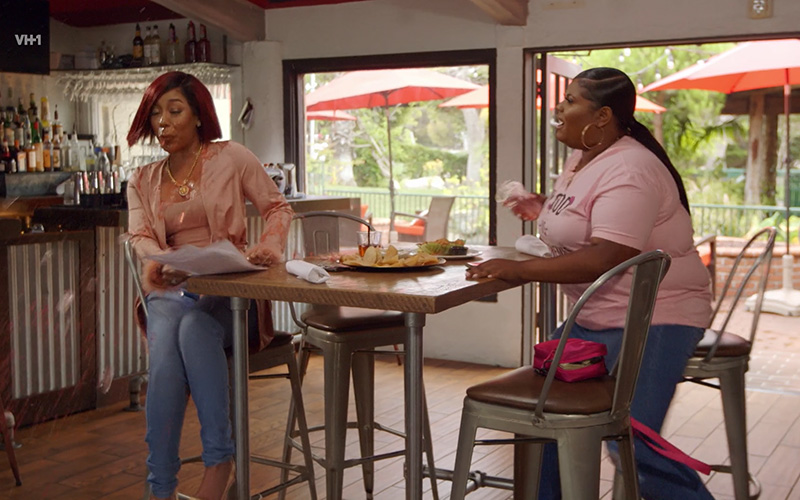 Paris, thinking that everything was cool between them, was taken aback by K. Michelle slandering her name on national television, and when K. Michelle continued to call her a thief, all hell broke loose.

Here’s how it went down:

K. Michelle: “You cannot keep making excuses for what happened.”

As K. Michelle reached for her receipts, Paris pulled out a stack of dollar bills: “How much was it, K?”

As Paris continued to try to pay her back in cash, K. Michelle calmly let her know that she didn’t want her dollar bills: “Girl, I don’t want that!”

After exchanging a few words back and forth, Paris threw a full drink at K. Michelle, nearly drowning the poor girl. (No, really, it looked like K. Michelle couldn’t breathe for a few seconds!)

Surprisingly, K. Michelle didn’t retaliate with any physical action. She just kept shouting “YOU ARE A THIEF!” to which Paris responded “YOU FAKE ASS KEYSHIA COLE!”

Their exchange ended with K. Michelle proclaiming “She almost messed up my new hose!”

Needless to say, Twitter went crazy over Paris and K. Michelle’s altercation. Peep some of the best and funniest reactions below:

K said “who steals $8? What was you buying? Crackers?” I’m on the floor. #lhhh pic.twitter.com/BMxbCmDViV

Paris talking about K. Michelle not letting it go, when she the one who keep talking about it and again it don’t matter if it’s $50 or $500 if it’s not your money, don’t spend it. #LHHH #LHHHollywood . pic.twitter.com/e1ETjY6q6K

Hold tf up! K. Michelle’s makeup did not even SMUDGE!!!! I need her glam team! TF #LHHH

K Michelle said she almost messed up my new nose ??. She definitely hit a sore spot with Paris and it obviously must be the truth or Paris ass wouldn’t have gotten that mad. #LHHH