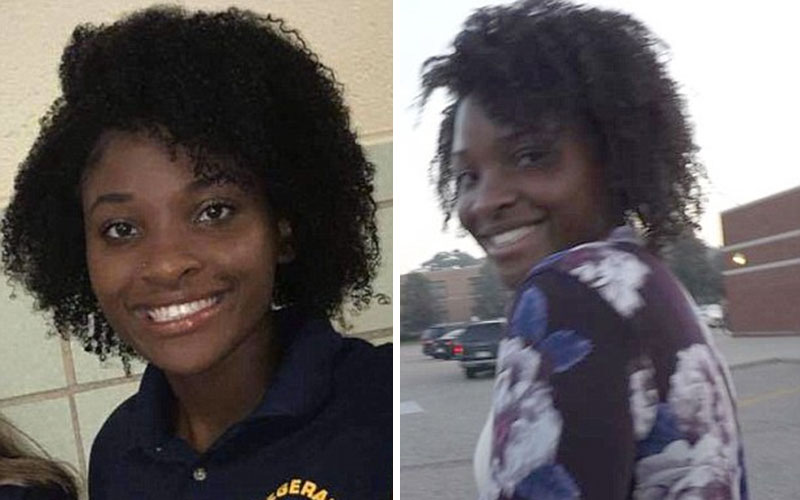 Danyna Gibson, a 16-year-old girl from Michigan, has been making headlines after being fatally stabbed at school by one of her classmates.

Gibson’s classmate 17-year-old Tanaya Lewis has been arrested in connection with her murder. Both girls were students at Fitzgerald High School.

Here’s what you need to know about Danyna Gibson and her untimely death:

1Danyna Gibson was allegedly killed over text messages between her and the suspect’s boyfriend.

According to reports, the incident sparked over text messages between Danyna and her accused killer’s boyfriend. In the text messages, Danyna is said to have told Tanaya’s boyfriend she was cheating on him. Tanaya allegedly caught wind of the messages and sought out revenge once she arrived at school the morning on September 12th.

Police say at around 8:30 a.m., Tanaya stabbed Danyna twice in the chest, striking her in the heart and in the back with a steak knife. The incident happened in a classroom with 30 students and a teacher present.

A resource officer attempted to perform CPR on Danyna, but she died at the hospital an hour after the stabbing occurred.

“At approximately 8:30 a.m. this morning, we received a report that a Fitzgerald High School student had stabbed another high school student resulting in injuries,” Fitzgerald Public Schools Superintendent Laurie Fournier said in a statement. “The alleged attacker has been arrested and is in custody. The injured student has been transported to the hospital. The high school is on lockdown until further notice. We will share updates when they are available. Please note the safety of our students and staff is our number one priority.”

Danyna was also rumored to be in a relationship with the boy she and Tanaya into an argument over. Danyna and Tanaya were also said to have been friends at one point in time and were both Straight-A students.

2Danyna tried to run from her killer, but wasn’t able to escape.

One of the students who witnessed the tragic incident told WXYZ they saw Danyna running from her killer to save her own life, but wasn’t able to escape being stabbed to death.

“She was running towards me, she was screaming, and all I saw was the girl catch her and stab her in her chest,” said Francesca Pascua. “All I just saw was her running trying to save herself, and that’s when she stopped, and the girl grabbed her and stabbed her.”

The student also said Danyna’s killer was eventually pushed out of the classroom by a teacher and was exhibiting very bizarre behavior.

“She ran out the classroom while the teacher was pushing her out and she was saying I’m going to kill you I am going to slit your throat she was saying crazy things and like running around in circles,” said Francesca.

Another student who saw Danyna stabbed believes she had already been stabbed by the time they noticed she was severely injured.

“Part of me believe she was stabbed before we saw her get stabbed,” Orion Taylor said. “When she was in the back of the classroom because there was a blood trail, blood on the floor.”

3Tanaya Lewis was arrested and will be charged as an adult.

Following the tragic stabbing, Tanaya Lewis was taken into custody on Wednesday (Sept. 12) and was arraigned Friday afternoon. She is being held without bond and was charged with first-degree murder.

Prosecutors said that Tanaya was seen smiling and laughing while she stabbed Danyna to death.

“This was not a heat of passion,” Macomb County Prosecutor Eric Smith said. “This was not a second-degree murder. This wasn’t an altercation of any sort. This was not ‘I’m going to meet you behind the lockers.’ This was premeditated. It was a complete surprise to our victim. There was no previous altercation in the classroom.”

Smith also said the incident occurred so quickly no one was able to catch it on video. “It happened so lightning fast that nobody had any time to get on a phone,” said Smith.

Tanaya could face up to life in prison and is due back in court on September 27th.

4Danyna Gibson was a Straight-A student with a bright future.

Danyna was a Straight-A student and was said to have a big heart by many of her friends.

“She was goofy, clumsy. She was just silly,” one of her friends Tia Bennett said.

Her family told WXYZ that she was a member of the cross country team, robotics club, color guard, marching band and National Honor Guard Society.

Danyna’s father, Preston Gilbert, is still stunned over the death of his daughter, who he says was going to be valedictorian of her class.

“I thought it could never happen to me. My baby was gonna be valedictorian,” he said while speaking with the Detroit Free Press.

A vigil was held on Thursday in honor of Danyna’s death at the school’s football field. Her friends and family wore purple clothes and carried purple balloons as they came to together to remember her.

5Fitzgerald High School released a statement about the murder.

After Danyna Gibson was pronounced dead at the hospital, Fitzgerald High School released a statement saying that the school would be closed on Thursday, September 13th. The school said they were cooperating with police and “conducting an internal review of the incident.”

“We are deeply saddened to share that the Fitzgerald High School student who was stabbed this morning passed away at the hospital. Our hearts and prayers go out to the student’s family and we offer our deepest sympathy.

“At the High School we have deployed additional counselors, psychologists and social workers for students and staff who need support during this difficult time. Students and their parents may come to the High School between the hours of 8 a.m. and 2 p.m. for support and assistance.

“We are working very closely with the police department on this matter as well as conducting an internal school review of the incident which will review all our current safety procedures and protocols. This is a time of mourning for the Fitzgerald Community and we ask for you to respect the privacy of the victim’s family.”