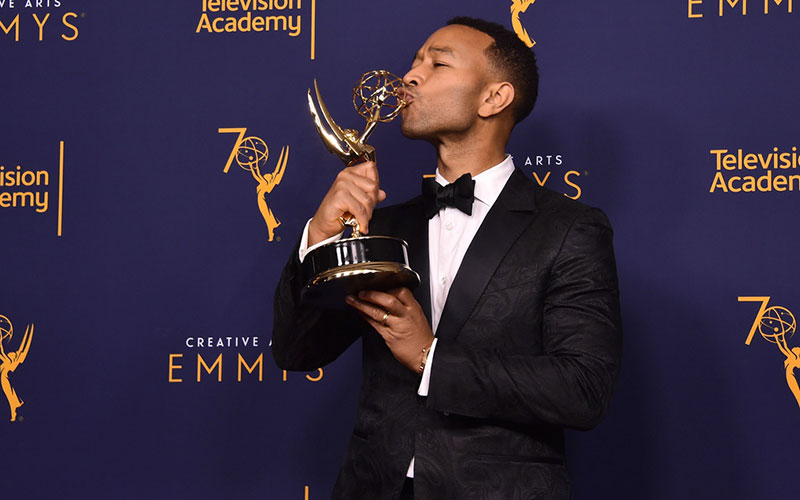 Congratulations are certainly in order for John Legend, who made history over the weekend after achieving EGOT status thanks to a recent Emmy win.

Achieving “EGOT” status is no easy feat, as the acronym stands for Emmy, Grammy, Oscar and Tony—and not many people have that. In fact, John Legend is the first African American male AND the youngest person to achieve the legendary status.

Legend joins only 14 others who have received the quadruple crown—a distinguished list that includes Whoopi Goldberg, Audrey Hepburn, Mel Brooks and composer Richard Rodgers (the first to have received all four).

In addition to his new Emmy AWard, Legend has 10 Grammys earned between 2006 and 2016, one Oscar (Academy Award) from 2015 for Best Original Song (“Glory” from Selma), one Tony Award from 2017 for Best Revival of a Play for the stageplay Jitney.

Legend’s wife, Chrissy Teigen, showered her husband with praise on social media. She posted an Instagram video legend, still wearing his tux, pulling out a piano bench to reach the top shelf of his awards collection and placing his Emmy in the center as he stands back and grins. “Perfect,” she says in the background. Her caption on the post read: “And I say hey, what a wonderful kind of day.”

She also posted a video on Twitter of Legend in a robe making “EGOT pancakes.”

“We inspire each other,” Legend told reporters of his marriage to Teigen after accepting his Emmy Sunday night. “She inspires my songs, she inspires me to want to be a better husband and a better father. We support each other fully in everything that we do. I root for her in her career and everything she’s doing. And I expect that she’ll be up here winning Emmys herself for all the awesome work that she does.”