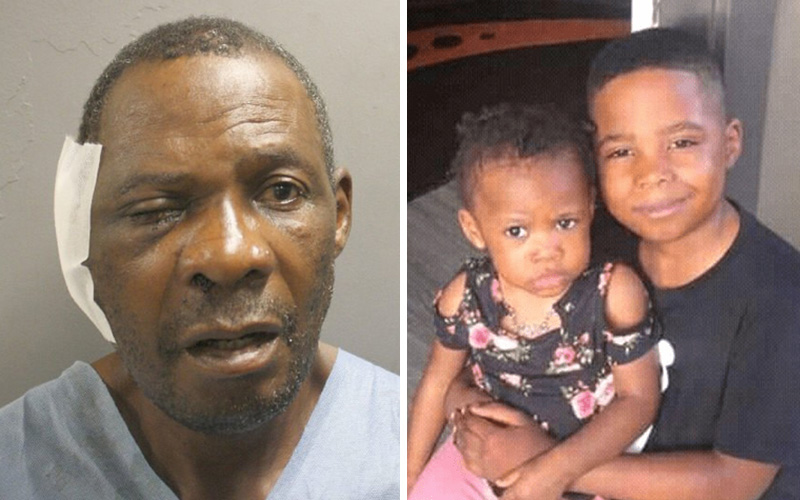 A Houston, Texas man was arrested on murder charges after he killed his two young children to spite his wife.

According to news reports, Jean Pierre Ndossoka fatally stabbed his 8-year-old son and 1-year-old daughter at his home on Saturday (Aug. 4). The reports state that Ndossoka slit his children’s necks.

The children’s mother and Jean Pierre’s wife, Sabine Ntongo, found the kids dead after receiving a phone call from her husband saying that he killed their children and “left her a present.” Ndossoka had already fled the scene by the time Ntongo arrived at the apartment.

On Sunday (Aug. 5), Ndossoka was found with a self-inflicted gunshot wound in Pasadena, southeast of Houston. He admitted to police that he violently murdered his own children and told them that his 8-year-old son, Marcell Ndossoka, begged for his life, telling him “Daddy, I’m sorry” while his 1-year-old daughter, Anna-Belle Faith Ndossoka “just kept crying.”

Ndossoka was charged with two counts of capital murder and could face the death penalty if convicted.

Here’s what you need to know about Jean Pierre Ndossoka and his disturbing act of violence towards his young children:

Last Saturday (Aug. 4), Jean Pierre Ndossoka’s two young children were dropped off his apartment for their visitation. Ndossoka called his wife, Sabine Ntongo, multiple times that day while she was at work. At some point during the afternoon, he allegedly called her and told her had killed the children and “left her a present.”

The Houston Chronicle reports that Ndossoka instructed Ntongo to use the key under the doormat to let herself in. She rushed to the apartment. When she arrived, she saw the bodies of her two kids on the bed with their throats slit and called 911. Ndossoka was nowhere to be found.

Not too long after putting out a vehicle description, police were able to pick Ndossoka up in Pasadena just a few hours later around 1 a.m. He was suffering from a self-inflicted gunshot wound. At first, he told police he didn’t remember what happened, but when he was questioned at the hospital, he admitted to doing “something bad” and claimed to have high blood pressure.

Police said Ndossoka said he had choked the children to death before later admitting to using a knife and leaving a note. He eventually explained what really happened. He said he had slit his children’s throats as they begged for their lives.

2Ndossoka called his wife, Sabine Ntongo, to tell her that he had killed their children and “left her a present.”

Sabine Ntongo is comforted by a family member after finding her children stabbed to death in their father’s apartment in Houston.

Sabine Ntongo, who owns a hair braiding business in Houston, said her husband called her several times on Saturday while she was working. She had dropped her children off with her husband, Jean Pierre Ndossoka just a few hours earlier.

When she finally answered one of Ndossoka’s called last Saturday around 3:30 p.m., he told her what he had done. Ndossoka said he had killed their children and had “left a present for her” at his apartment, court documents said, and he had left a key under the doormat so that she could let herself in.

Ntongo found her children’s lifeless bodies in the apartment’s back bedroom. Their throats had been cut and a bloody knife was laying on the floor. She called 911 and police later found her husband in Pasadena with a self-inflicted gunshot wound. Police said they believe he tried to kill himself, but was unsuccessful.

During questioning, Ndossoka admitted to the horrific crime before revealing his son Marcel’s haunting last words: “Daddy, I’m sorry.” He said his daughter Anna-Belle Faith “just kept crying” as he cut her throat.

3Ndossoka told Ntongo in a handwritten note that she would “carry the burden” of her children’s souls and he planned to die with them.

When Sabine Ntongo found her children’s dead bodies at her husband’s apartment, she saw a note written in French by her estranged husband.

He apparently intended for the incident to be a murder-suicide because police found him miles away from Houston in Pasadena in his truck with a self-inflicted gunshot wound.

When investigators first interviewed Ndossoka from his hospital bed, he at first claimed to not remember what had happened in his apartment. After being pressed by investigations, he finally admitted he had done “something bad,” court records said.

When police asked him what happened, Ndossoka motioned towards his neck. He then recounted his children’s final words. “Daddy, I’m sorry,” he said his son Marcel pleaded with him as his daughter Anna-Belle “just kept crying,” he said.

4Ndossoka and Ntongo have been married for 6 years and emigrated to the U.S. together from Congo.

Jean Pierre Ndossoka and his wife Sabine Ntongo were estranged at the time of the murders.

The couple married six years ago, and had recently emigrated together from Congo to the U.S., where they both became naturalized citizens. But family members told local CBS affiliate WLKY that Ndossoka was verbally abusive.

It isn’t clear if Ndossoka and Ntongo were in the process of divorcing, but they were separated with Ntongo being left with the children. Custody then became a new issue for the couple because Ndossoka wanted to see his children, 1-year-old Anna-Belle and 8-year-old Marcel, every day.

So to spite her, he did something that he knew would hurt her to her core. He brutally killed their children by slitting their throats while they were in his custody. “I am dying with my two children,” Ndossoka allegedly wrote in a letter Ntongo found at the apartment after she discovered the bodies of her children.

The hand-scribbled note, written in French, also told Ntongo she would have to “carry the burden of our souls, me and my children.” But Ndossoka was unsuccessful in his suicide attempt, because he was later found in his truck with a self-inflicted gunshot wound.

Family are trying to hold themselves together once crime scene investigators arrive.#khou11 pic.twitter.com/XAWqFVWflA

Ntongo’s cousin, Patrice Nsuary, told WLKY he had recently counseled the couple about their deteriorating relationship. “I came down here to talk to both of them about the marriage. In Africa, we talk to both the man and wife,” Nsuary said. “I spoke to him yesterday.”

Nsuary also said he had seen Ndossoka and his son at the grocery store the day before the murders and “he seemed fine.” Another distraught family member told the news station they had no idea why Ntongo would kill his kids, especially in such a brutal manner “We don’t understand,” they said. “It’s just unbelievable. We don’t know why.”