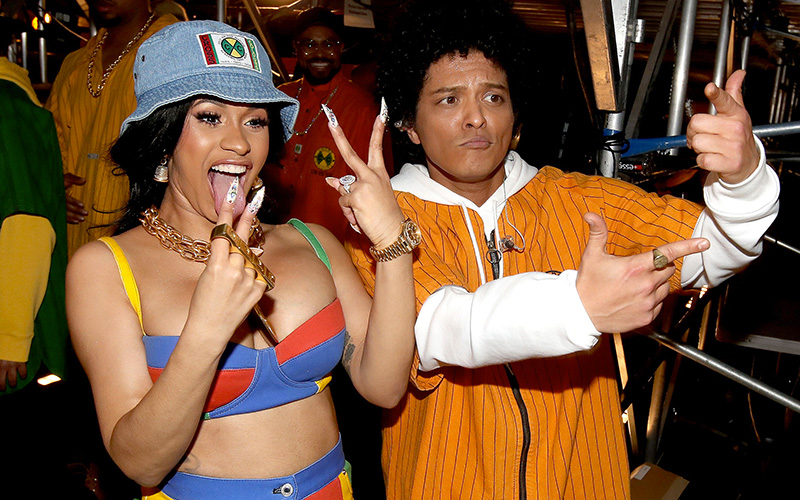 Bruno Mars was blindsided by news of Cardi B pulling out of their joint tour to take care of his newborn baby, so much so that it’s being reported that his team is “scrambling” to find a replacement ASAP.

Sources connected to Bruno’s tour—slated to kick off in September—tell us he’s without an opener and, so far, there has been no replacement made for Cardi. We’re told Bruno’s people were burning up the phones Friday … starting conversations with reps from a number of musicians but nothing is close to being locked down.

Our sources say Cardi’s decision to back out of the tour has created some issues … dancers were hired, costumes made and stage backdrops built.

Back in February, Mars announced that Cardi would be joining him on the final leg of his 24K Magic Tour. However, last Thursday (Jul. 26), Cardi announced via Twitter that she “understated this whole mommy thing” and she’s “not ready physically” and “not ready to leave [her] baby behind since doctors explained it’s not healthy for her to be on the road.”

Sorry guys ,Thank you @BrunoMars for being so supportive and understanding .Your the best ?????? pic.twitter.com/ds9HE61i9j

Bruno was supportive of Cardi’s decision to stay home and enjoy being a new mommy and replied with a heartfelt message, saying that the “most important thing is you and your family’s health” and “you are absolutely doing the right thing.”

He went to say that he loved her and would “play Bodak Yellow every night in your honor” before ending his message with “Please give your baby girl a hug from me and a hug on behalf of everyone on the 24K Magic Tour. Love, Bruno.”

And after days of working overtime to find a replacement for Cardi, it sounds like he’s already found someone to fill her spot.

Responding to a fan who asked who would be taking over, Bruno joked, “I got a cousin learning all of Cardi’s songs right now. It’s gonna be great! He’s super excited.” When asked if he would reveal who’s really replacing Cardi, Mars said “Nah.”

I got a cousin learning all of Cardi’s songs right now. It’s gonna be great! He’s super excited ? https://t.co/6RILW7wNQS

With the tour kicking off in September, Bruno should be making an announcement about who will be taking Cardi’s spot pretty soon. Of course, Cardi B is irreplaceable, but I’m sure he’s found someone good enough to fill her shoes.