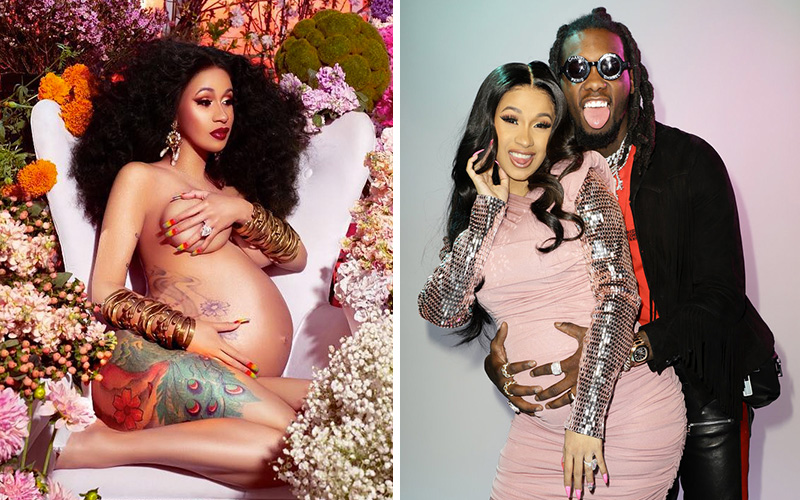 Baby Bardi is here! Cardi B is officially a new mom after giving birth to a baby girl.

Cardi and her husband Offset welcomed their daughter Tuesday night (Jun. 10) at a hospital in Atlanta, and Cardi officially announced the birth of Kulture Kiari Cephus via Instagram Wednesday. Kiari, the baby’s middle name, is Offset’s real first name.

In her announcement photo, Cardi can be seen posing nude surrounded by a bed of flowers. Cardi tags her husband in the caption on the photo, which also reads the name of their baby girl her birthday: 07/10/18.

This has been a long journey for Cardi, who was rumored to be pregnant back in February after Super Bowl weekend. When fans questioned her via Twitter, she denied the pregnancy rumors, saying that she was just gaining weight and told them to “let me fat in peace.”

A month later, pregnancy rumors swirled even more when she attended and performed at the iHeart Radio Music Awards wearing outfits that were clearly covering her belly, and also reports at the time suggested she would be a VERY pregnant woman by the time her Coachella performance came around.

By April, Cardi decided she was going to reveal the news herself, and confirmed her pregnancy by debuting her baby bump during her SNL performance the week before Coachella. She confirmed she was having a girl in May, and continued to work throughout her pregnancy, releasing videos and performing shows here and there, and even making a surprise appearance at the birthday bash in Atlanta in June.

The birth of Cardi and Offset’s daughter Kulture comes mere weeks after Cardi (born Belcalis Almanzar) confirmed that she and Offset (born Kiari Kendrell Cephus) secretly wed this past September, a month before he publicly “proposed” to her. “Well now since you lil nosey f**ks know at least ya can stop saying I had a baby out of wedlock,” she wrote on Twitter.

Baby Kulture is Cardi is her first child and her first with husband Offset, who already has three other children (two sons and a daughter—Jordan, Kody, and Kalea Marie) from previous relationships.