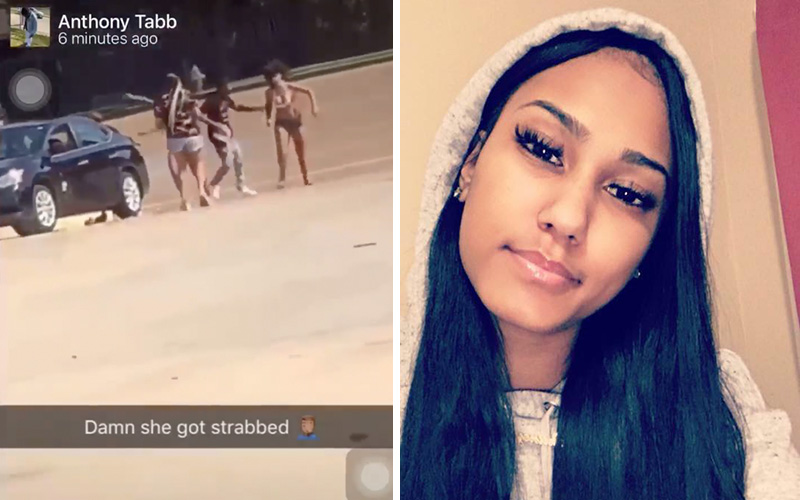 The cell phone video footage is related to an incident in which an 18-year-old woman named Britney Allgood was stabbed while fighting with another woman named Bianca Sims in the Hickory Hill area of Memphis, TN.

According to news reports out of Memphis, police were called to the scene of the “neighborhood fight,” as they described it, on Thursday evening (Jul. 5). When they arrived, they found two women, who witnesses said knew each other, fighting. “Once she pulled off, the victim was bleeding heavily,” one witness told Fox 13 Memphis.

The witness, who didn’t want to be named, said he was leaving work when he noticed the commotion. He said he saw one of the women pull out a knife and stab the other.

The viral cell phone footage also showed a baby being taken from a car near the chaos at one point. In one clip, a woman can be heard saying “don’t shoot!” insinuating that someone had brandished a gun. “She cut the sh** out of her,” says another man off-camera. “With the big knife?” the woman asks. “Yeah,” the man replies.

Watch the video clips below:

“It’s like they were trying to jump the young lady, the victim,” the eyewitness told Fox 13, adding that many other spectators were also recording the fight with their cell phones. “One girl had her camera out and was hitting the girl at the same time her friend was dying,” he said.

Britney Allgood, a recent high school graduate, was taken to St. Francis Hospital by private vehicle and later died as a result of her injuries. The woman responsible for the stabbing, later identified on social media as Bianca Sims, remained on the scene and was later detained by officers, but wasn’t charged.

According to MPD, this is an “ongoing investigation” as they determine whether the homicide was justifiable.

CLICK HERE to read more about Britney Allgood and the fight between her and Bianca Sims.