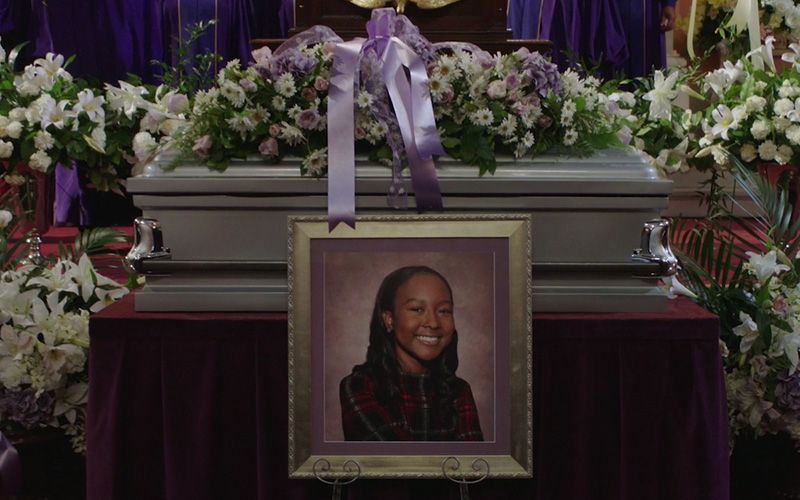 After “Power” Season 4 ended on a tragic note, “Power” Season 5 focuses on the St. Patrick family trying to put the pieces back together and heal from the untimely death of their teenage daughter Raina.

Raina’s twin Tariq, who is the most responsible for her death after his encounters with crooked police officer Raymond Jones a.k.a. Ray Ray, hasn’t learned anything from her passing and is still playing with fire.

The only good thing that has come from Raina’s death is it ended up bringing Ghost, Tommy and Kanan back together on the same team to take out their one common enemy Dre. Tasha, on the other hand, is still struggling with Raina’s death and is trying to keep enough strength to be the backbone of the family, while balancing her relationship with Ghost’s new lawyer, Terry Silver.

This new season definitely seems like it’s going to have a lot of twists and turns and hopefully for everyone’s sake will end with Dre being killed for his disloyalty and backstabbing.

Power‘s Season 5 premiere episode opens with Angela having flashbacks and almost going into a panic attack at the crime scene of officer Raymond Jones a.k.a. “Ray Ray” because she thinks Ghost is responsible for his death.

Last season, Angela helped Tasha find Tariq’s whereabouts after he went missing, which makes her believe she may have unintentionally given away Ray Ray’s location to Ghost and Tasha. In reality, we know Tariq is the one who actually killed Ray Ray to avenge his sister’s death in the Season 4 finale, but at this moment Angela is unaware of that. Angela knows that if she did give Ray Ray’s location to Ghost and Tasha, she can be in a whole heap of trouble.

While Angela is trying to keep her involvement with Tasha on the hush, a new character named Blanca Rodriguez, who is a member of NYPD’s Internal Affairs, is introduced to the show. Rodriguez is working on the Raymond Jones case and happens to notice Angela at the crime scene. She later goes to Angela’s office to confront her about being at the crime scene and questions her about not putting her name on the sign-out sheet, which is a violation of NYPD protocol.

Angela tells Rodriguez that she slipped up and forget to sign the form and didn’t personally know Officer Jones, but he came on her radar shortly before he went missing. Rodriguez can tell Angela is lying and is up to no good, and we can already tell that she is going to be watching Ms. Valdes very closely throughout this season.

Dre is back on on the BS and early on in the episode, he notices Angela leaving the building where Ray Ray stays at with a load of cops cars. This causes Dre to get nervous and he calls Tariq to find out what happened, but Tariq tells him he can’t talk at the moment. Dre then calls Cristobal and tells him they have a problem and need to meet up.

The scene shifts to Tasha returning home (we’re guessing this is not too long after Tariq shot Ray Ray) and LaKeisha is there waiting on her. Tasha tells LaKeisha she needs her to say that she and Tariq were at the house the whole night if anybody asks. LaKeisha is confused as to why Tasha is asking her to give an alibi and wants more answers, but Tasha is unwilling to say too much. Meanwhile, Ghost, Tommy, and Kanan hang out together and devise a plan to take out Dre. Ghost is somewhat hesitant to have Kanan around and asks him how can they trust him, to which Kanan reminds Ghost he is the one who set him on fire and if he wanted to, he could have shot him and Tommy long ago. Ghost seems to agree and keeps Kanan along for the ride.

Maria Suarez, the woman who was blindfolded while her fiance was murdered by Ghost in the series pilot, sits down and speaks with Detective Saxe and Tameika Robinson (the new U.S. Attorney for the Eastern District) about identifying James St. Patrick as Ghost. Suarez became aware of St. Patrick being Ghost after hearing his voice during an interview he did on TV in Season 4.

While Suarez actually knows what she is talking about, assistant U.S. Attorney John Mak reminds Saxe and Robinson that Suarez never saw Ghost and they can’t prove anything by her simply hearing a voice. Robinson agrees with Mak and refuses to move forward with Suarez’s statement until Angela weighs in, but Saxe wants to keep all things related to Ghost away from Angela.

While Saxe is busy throwing Angela under the bus, Angela meets up with Tasha to confront her about Ray Ray’s death. Angela tells Tasha she believes she tricked her into giving Ray Ray’s location away and that she thinks Tasha told Ghost to kill him. When Angela threatens to turn Tasha and Ghost in and testify against them, Tasha finally reveals to Angela that Tariq stole her gun and killed Ray Ray. Angela is more than shocked to hear this news and informs Tasha that she just came from the crime scene, where a bullet was pulled from the wall. This is really bad news for Tasha and Angela because it can get them both caught up.

Angela asks Tasha where the gun is, and Tasha tells her it’s gone and to just report the gun as stolen. But, the problem is, when Angela executed a search warrant last season to go through Ghost and Tasha’s home, Tasha’s gun was taken by the police and a ballistics test was run on it, putting it in the system. This leads Tasha to ask Angela the biggest favor she has ever asked her: to delete the records of the gun, in order to save everybody (including herself) from going down. She’s already lost one child and doesn’t want to lose another one. Can you blame her?

Tommy is really stepping up so far this season and proving his loyalty to Ghost ever since he decided to put the blow down and stop questioning Ghost’s every move. He quickly checks Kanan about his involvement with Tariq and advises him to stay away from his nephew or else. He even manages to keep his cool after Councilman Tate threw shade on him at Raina’s funeral and told Ghost to not let him sit with the family because he could mess up his image.

Tariq, on the other hand… boy boy boy, he hasn’t changed not one. Damn. Bit. He is still f-boy of the century, and, besides Dre, is probably the worst person on the show. I mean, he basically was responsible for his twin sister’s murder, after all. And honestly, if Tariq got killed tomorrow, I don’t think anybody would shed a tear or give one single f***. His nonchalant, emotionless, and uninterested attitude when questioned by Ghost and Tasha about his involvement with Ray Ray is just downright disrespectful. One of the best scenes in this episode is when Ghost finally got enough and jacked Tariq’s wannabe thug azz up and pinned him against the wall in the hallway of their house.

And the nerve of Tariq to stare Ghost in the eyes like he’s really about that life and acting like he wasn’t about to just catch the fade made it even harder to care for, like, or rock with Tariq’s campaign.

Tariq pissed Ghost off so bad that he went off on Tasha for not watching him and letting him just roam the streets with Kanan and drink lean all day. But if that was enough to hate Tariq, the mess he pulled at the funeral was a point of no return.

After Tommy went through the trouble of hiring the Italians to kill Dre and Kanan getting his boys to join in on the fun as well, Tariq warns Dre about the hits put out on him and saves Dre from getting a hot piece of lead put in his head. And not only did Tariq warn Dre, but he fake cried while giving the eulogy at Rain’s funeral to save a f*** n**** who all this time is plotting to take his father’s spot and was also just in a shootout with his father as well. If this is not enough to write Tariq out of your heart, I don’t know what the hell is. Speaking of the shootout, which was one of the most exciting and nerve-wracking scenes of the episode, Dre really thought he took Ghost out with that weak azz gunshot. Even Tommy joked about how Dre can’t shoot worth a damn. Even though Kanan came through just in the nick of time and fired back at Dre, Cristobal and their goons with his big azz gun, at the same time, it makes you wonder did he miss them on purpose? Or was he just trying to get them to back off? Only time will tell.

Ghost crying in the shower over Raina’s death after being shot was a quick tear-jerker. Anytime Ghost cries, it makes you feel bad because Ghost is probably the strongest person on the show and never shows his weak side, but every now and then in rare moments like this.

Even though Tasha and Ghost are far from being a couple ever again, Tasha still cares about him dearly and warned him if he gets killed fooling around with Dre she will never forgive him for leaving her and their two kids (Tariq’s punk azz and the other baby girl we barely see) behind. It’s good to see Tasha and Ghost putting their differences aside and trying to remain strong for their family following Raina’s death.

Besides Raina’s funeral and Tariq saving Dre, perhaps the most upsetting part of the episode comes at the very end when Dre shows up to Raina’s gravesite while Ghost is grieving over the fact that he just had to put his child in the ground.

Dre, who is fresh from almost losing his life and luckily being able to escape from Kanan’s goons and the Italians, tells Ghost he is protected by the Jimenez cartel and threatens to kill Ghost and his family if he doesn’t back off. Dre goes so far to put a La Araña card in Ghost’s shirt pocket as he stands there. This only angers Ghost, who happened to not be strapped at the time (Dre is lucky) even more and he rips the whole card in half.

Elsewhere, Tommy returns to his home to find a La Araña card at his door and Kanan finds one on his car once he leaves the club with a chick. The only thing that made the ending not so bad was when Angela finally deleted the evidence of Tasha’s gun out of the system. But, then at the same time, it’s hard not to feel bad for D. Gaines, whose name Angela logged in under in the system. She might get this person caught up bad! 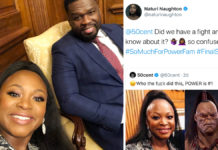 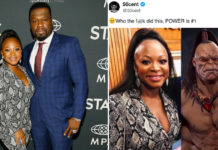 50 Cent Trolls Naturi Naughton’s Hairline Once Again With Hurtful Meme: “Who the F**k Did This”