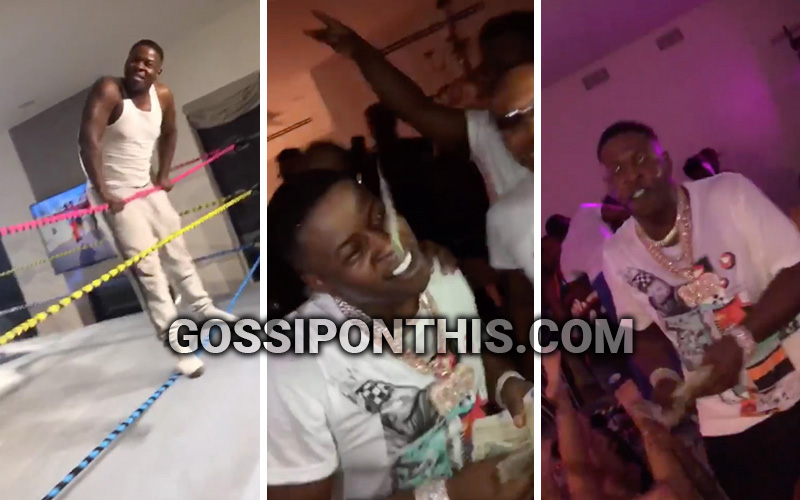 Blac Youngsta threw a LIT AF house party last night that featured a wrestling ring full of butt booty naked strippers who were busting it wide open. And when we say wide open, we mean WIDE OPEN. As someone on Twitter put it, “only on Blac Youngsta’s IG can you see a girls birth canal,” which should basically tell you how nekkid these women were.

On Monday morning (Jun. 24), Blac Youngsta announced via his Instagram Story that he was throwing a house party later that night. Now, we all know Blac Youngsta is a very lit individual, but I don’t think anyone anticipated how lit his house party would be.

The rest of the videos on his IG story showed him preparing for the party, including the setup of a wrestling ring. Within hours, that same wrestling ring was filled to the brim with fully naked strippers as partygoers—including rapper YFN Lucci—made it rain all over them with thousands of dollars worth of hundred dollar bills.

The videos from Blac Youngsta’s InstaStory are so explicit that we cannot post them on our website, but you can watch ALL of them here.

The clearly NSFW videos have caused Blac Youngsta to become a top trending topic on Twitter, where disturbed individuals are posting hilarious reactions, warning folks to not go to Youngsta’s IG story if they’re in church.

Check out some of the best/funniest Twitter reactions below:

Went through like 20 of Blac Youngsta ig snaps and was surprised when I saw a whole wrestling ring.
Little did know I hadn’t seen nothing yet pic.twitter.com/LHgUq5xDDS

I thought Blac Youngsta was gonna have a full fledge WWE match at his house party, boy was I wrong ?????

Bruhh only on Blac Youngsta’s IG can you see a girls birth canal. ? pic.twitter.com/Hk6bAMKqaJ

Blac Youngsta must got a grand theft auto cheat code or sumthin .. ain’t no way his ig account still active after all that??????

I Need To Get Into A Blac Youngsta Party Before I Die????? #BlacYoungsta pic.twitter.com/CMVeITxiRp

Me : oh how nice Blac Youngsta got a boxing ring at his party
Me: 8 mins later pic.twitter.com/RPCzPaItI9

When your girl says she going to a Blac Youngsta party pic.twitter.com/gFW09c43q6

*me trying to figure out the cleanup process/logistics at a Blac Youngsta party…like how many trash bags, how many brooms, how the pie is divided, the Tetris method of packing said stacks in the trunk. How many hours it took. Did anyone slip? I need answers* pic.twitter.com/SqzKKOd9xC