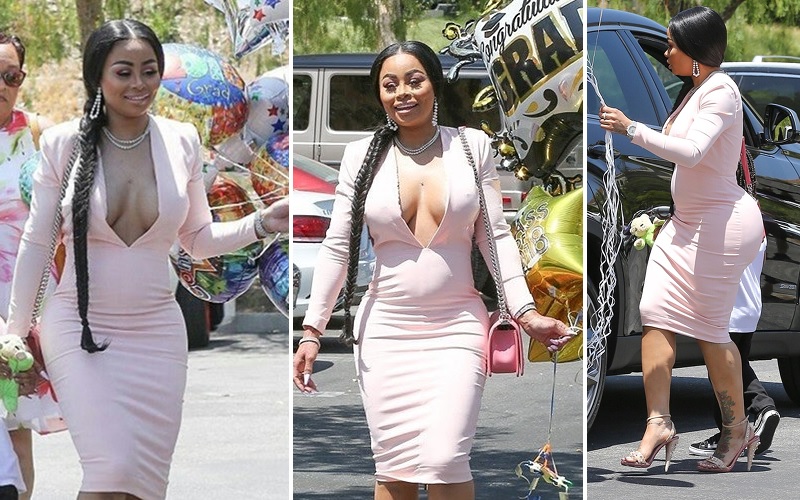 Is Blac Chyna pregnant with baby No. 3? Social media seems to think so after recent photos suggest she may be sporting a new accessory: a baby bump.

Photos surfaced of Chyna heading to her son’s kindergarten graduation on Friday (June 8). But it wasn’t the array of balloons she was carrying for 5-year-old King Cairo that caught everyone’s attention. It was the tiny bump made noticeable by her tight pale pink dress.

While absolutely nothing has been confirmed, if the 30-year-old is, in fact, pregnant, her 18-year-old rapper boyfriend YBN Almighty Jay is most likely the father. And Twitter definitely had a few things to say.

When you realize Blac Chyna got pregnant by somebody born in 1999 pic.twitter.com/5ihSFg8UDt

LMAOOOOOOOOO BLAC CHYNA GOT PREGNANT BY HER SON’S PLAYMATE

Listen Blac Chyna getting pregnant for YBN Almighty is genius shes invested in a couple generations, her money wont die for a minute. The Womb of Wall street.

When Blac Chyna out here having babies with babies pic.twitter.com/Q9fhdAjEAg

So Blac Chyna is pregnant by someone who still remember their high school locker combination ????? pic.twitter.com/M5cDZQlG3g

Chyna and YBN started dating in February and it wasn’t long before baby rumors began swirling around the couple. In April, a source told Page Six Chyna was two and half months pregnant with YBN’s child. However, TMZ shot down the rumor and confirmed Chyna was NOT pregnant at that time.

And for all we know, the rumors may be false again. It’s possible Friday’s “baby bump” was caused by the photo angle, a delicious lunch, or maybe Chyna couldn’t do a little photoshop magic since the photos were taken by paparazzi.

For what it’s worth, recent images on her personal Instagram page show a much flatter stomach. Chyna already currently has two children. Tyga is King’s father, while her ex-fiancé Rob Kardashian is the father of her 19-month old daughter, Dream.