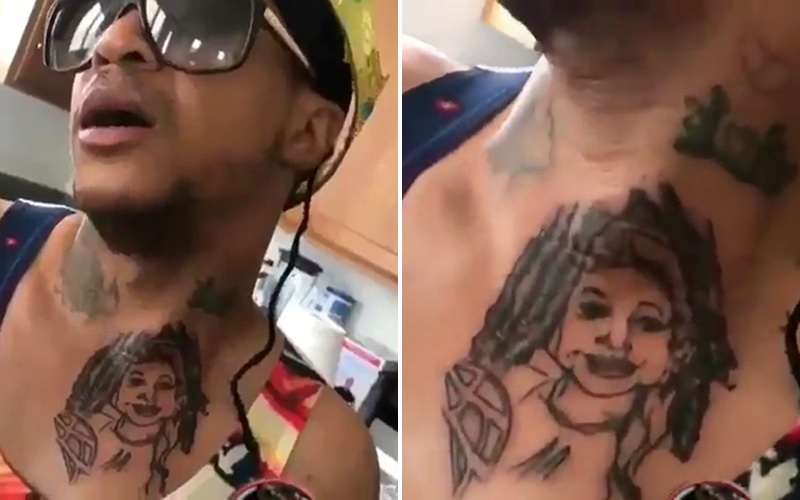 Orlando Brown is trying his best to take the title from Kanye West as the leader of our troubled black male stars. Brown gave us the ultimate WTF moment earlier this week when he revealed his fresh chest tattoo of Raven-Symoné.

“You trying to get this picture. You seen this yet?” Brown says wearing a fake gold crown and oversized sunglasses in a video that went viral earlier this week. He then showed off a new giant tattoo of a girl that bears a striking resemblance to a young Raven.

Brown and Raven have had a complicated relationship over the years. The two starred in Disney Channel’s That So Raven between 2003 and 2007. However, Brown was not asked to return to the show’s latest spinoff/reboot, Raven’s Home, which premiered in July 2017 and was renewed for a second season.

In recent years, Brown has claimed that he and Raven had a relationship back in the day and even claimed that she aborted his child in a 2016 music video. Raven has since distanced herself from her former co-star.

“Raven did not bail me out, my wife did. Raven ain’t even tryin’ to talk to me right now,” he said in an Instagram video in 2016 after being arrested for a domestic dispute with his then-girlfriend. “She think I stole her damn phone. I ain’t a crackhead!”

Brown has had several run-ins with the law, including DUIs and domestic violence arrests. He was arrested in April for outstanding warrants after failing to appear in court for allegedly hitting his girlfriend in 2016.