GOSSIPONTHIS.COM LOL These Katie Hopkins Memes Are Taking Me All the Way Out 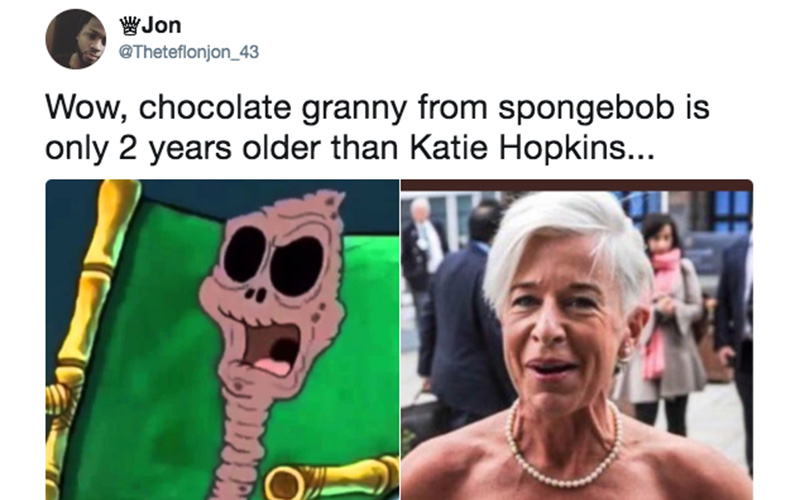 After the fairytale wedding came the Royal Wedding dress debate, with fans and pop culture/political analysts discussing who had the best wedding dress between the Duchess of Sussex (Meghan) and her new sister-in-law, the Duchess of Cambridge (Kate Middleton).

“Political dummy” Katie Hopkins weighed in on the debate, saying that it was “no competition,” because, in her opinion, Kate had a certain level of “class” that Meghan doesn’t possess, which wasn’t a surprising comment coming from someone like Katie Hopkins, who has no problem letting people know her distaste for people of color.

A bit of a backstory before we move forward with the hilarious memes: Katie Hopkins is a far-right commentator from the United Kingdom who has said a number of vile things against brown people, including calling someone a “jiggaboo” on Twitter and implying that immigrants should be shot if they try to enter the U.K. So when Katie—an old, dried up crustacean—came for the insanely beautiful Princess Meghan, Twitter used a bunch of hilarious memes putting the 43-year-old beside folks who are OLDER and prettier than her to let her know she looks terrible for her age, or, as someone put it, she’s “43 going on 93.”

In other words, how the hell are you gonna come for someone’s looks when you’re aging like an avocado?

Hopkins is pissed that Meghan refused her apple ? pic.twitter.com/P74Lwzzzmx

Also, this is what happens when you’re ugly on the inside:

And y’all… Lemme tell you… the juxtapositions were some of the funniest stuff I’ve ever witnessed on social media, and I’ve been doing this internet thing for a WHILE now.

Take a look at some of my favorites below:

Bare in mind that Tyra Banks is just a a year older than Katie Hopkins. pic.twitter.com/dReMmdVgu7

Ernestine Shepherd: 81
Katie Hopkins: 43
I don’t even have to say nuthin more pic.twitter.com/km8meFynog

Naledi is only 236,000 years older than Katie Hopkins pic.twitter.com/1o1LPkXGXO

Wow, chocolate granny from spongebob is only 2 years older than Katie Hopkins… pic.twitter.com/NNBmFnwLGv

King Tutankhamen is only 634 years older than Katie Hopkins pic.twitter.com/oOIn3UOPa9

Katie Hopkins is 5 years younger than me. In this pic, I’m wearing concealer, lipstick, eyebrow pencil and mascara. No filter. Embiggen that jawn.

Katie Hopkins is 43 years old and Janet Jackson is 52. What does it mean? ? pic.twitter.com/ncjcDh9MjW

This dirt I took a picture of in the middle of Africa is 4.5 billion years older than Katie Hopkins. pic.twitter.com/WcBkHlckR1

Katie Hopkins is 3 years younger than fellow Brit Thandie Newton. It’s really amazing how badly being a racist shitgoblin will fuck your face up. pic.twitter.com/Da9HNrAKZ3

In the words of every black grandma that ever lived, “God don’t like ugly.”

Maybe in the future, Katie Hopkins will think before she speaks. But, who the are we kidding? She’s going to keep spewing foul hateful things from that hole in her face and Twitter is just going to keep dragging her for filth, as they should.