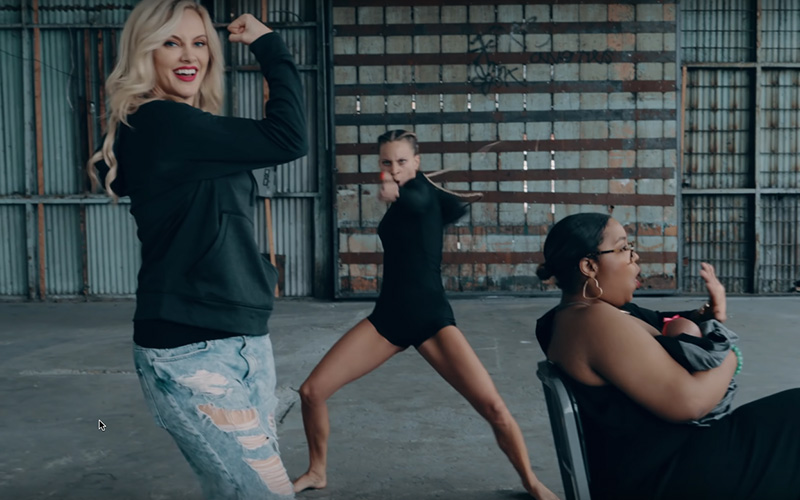 What in the unseasoned chicken, raisins in the potato salad, I’m gentrifying your neighborhoods and raising the rent, I let my kids be badasses in public kinda sh*t is this?!?

As if Taylor Swift’s remake of “September” wasn’t enough to make you resent the entire white population, Youtube personality Nicole Arbour has released her own version of Childish Gambino’s “This Is America,” and once again, wypipo have found a way to ruin another great thing created by black people (no offense white people, but it’s true).

Not only is Nicole’s ill-advised “This Is America” remake straight trash, but the choreography is typical off-beat, swag-less, unattractive, purposeless white people dancing. Just like raisins in the collards (or any other soul food dish white people want to ruin), nothing about it is good.

And the vocals are even worse….either Nicole just doesn’t have the range or she’s doing the typical white people thing where they try to mock black people or other people of color in the most annoying voice that they can come up with. In fact, at the beginning of the song, she says “Yeah yeah yeah yeah yeah yeah yeah yeah, go away,” and she should take her own advice and do just that.

At one point in the video, Nicole even goes so far as to attempt to moonwalk and booty pop in unflattering baggy grass cutter jeans. And the nerve of this Tomi Lahren look-a-like to be tap dancing offbeat in the video and wrote at the end of the song, “If I were a guy, you wouldn’t be asking yourself, ‘I wonder who wrote that?'” Who questioned the validity of your lyrics, ma’am? Like you were really spitting some bars… GTFOH!! (I honestly could say so much, but I’m gonna hold back because I have a lot of white friends and I actually like some white people—You know, the ones who aren’t the absolute worst.)

But, to sum it up, this version of Childish Gambino’s “This Is America” is honestly offensive and has no place in our society. I don’t know what’s worse, this song or Donald Trump being elected president, because both are really bad, tbh. Please stop the madness white people… please! We’re begging you at this point!

Tomi—err, I mean Nicole—responded to the well-deserved criticism she has been receiving over the video, and she claims to have had only good intentions.

“I thought it best to respond to the misinterpretation of my video here to clarify openly.

The purpose of my rendition was to honour the spirit of the video which absolutely moved me, by adding my and many women’s life experiences and truths to the brave and brutal truths expressed in the original.

It was created with every intention of bringing a light to women’s experiences such as the shaming of mothers breast feeding, common place date rape drugging, the labels put on us of “prude or hoe,” pressures to create a family, workplace harassment, the glass ceiling, drug dependency, effects of social media on modern relationships and self, and included a nod to the cheerleaders who have come forward demanding at least min wage from the multi million dollar corporations they work for.

It was a tongue in cheek way to give additional glory to what I believe is the most impactful piece of art in recent years.

In retrospect, due to the sensitive nature of the original, I understand why some people are wrongly portraying this as white vs black. However, this was not the intent or theme at all. We had a very diverse cast and creative team working on project from start to finish, who signed on to honour the original while adding more truth from another perspective.

I also understand my cheeky responses to hateful comments have been taken out of context, and I take full responsibility for responding to trolls in a way that could be so easily manipulated and become hurtful when reposted without context.

I firmly believe the best thing that can happen in America and North America right now is for everyone to create their own version of this video and show what life is like from their side. Through this honesty, I believe we can discover a new level of empathy and understanding for each other that will ultimately and finally lead us to healing and unity that is desperately needed in society. What can we agree on? What do we have in common? Where are we hurting? Start there, then rebuild.

Thanks so much for the continued support while I discover how to best express my ideas, comedy and art, and I appreciate your patience when I fumble while learning to maneuver within the awesome blessing that is having such a large voice.”