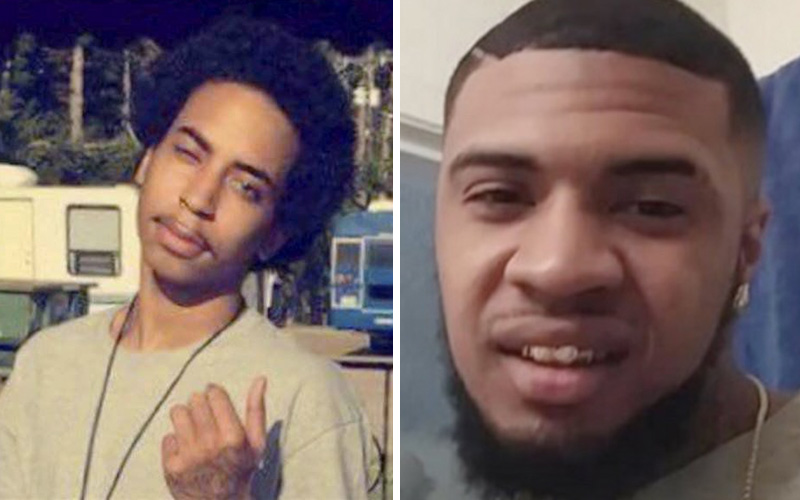 Alize Ramon Smith and Jarron Moreland—a pair of 21-year-old black men, were murdered—dismembered, chained and thrown into a pond in Oklahoma, and police have accused four members of a local white family of being involved in the slayings.

The racial dynamics of the case has led a number of people to categorize the murders as a “modern day lynching” in news reports and on social media, though authorities have said they don’t believe the men’s race was the motive for their murders, which allegedly stemmed from a botch sale of a gun via Craigslist.

According to reports, the two victims were reported missing on April 14th. Four days later, after a frantic search by family members, neighbors, and authorities, the men’s severed bodies were found “chained to cinder blocks” in an Oklahoma City pond.

Here are some things you need to know about the murders of Alize Smith and Jarron Moreland, and the four white people allegedly responsible for their deaths:

1Four members of a white Oklahoma family have been accused in connection with the murders of Alize Smith and Jarron Moreland, which is being referring to a “modern day lynching.”

According to WJLA-TV, when Alize Smith and Jarron Moreland were reported missing on April 14th, family members, neighbors and authorities began a frantic search for the two 21-year-old men.

According to court documents, the 16-year-old charged with first-degree murder, second-degree murder, unlawful removal of a dead body, desecration of a human corpse and possessing a firearm after delinquent adjudication.

Barker—who is believed to be Boettler’s boyfriend—was charged with accessory after the fact, unlawful removal of a dead body and desecration of a human corpse. According to arrest records, bond for Kevin’s bond was set at $6 million and Barker’s bond was set for $9 million. Authorities believe Alize Smith and Jarron Moreland were shot before they were dismembered and tossed in the pond. Barker is accused of helping the two brothers (Kevin and Brett) remove the bodies, strip them naked, cover them with tarps, and attach cinder blocks around them with chains before dumping them in the pond.

This literally appears to be a modern day lynching.

These 2 men, and 1 other, abducted 2 young Black men from a grocery store parking lot in Moore, Oklahoma.

Then shot & killed them.

Took them to a pond & tied their bodies to cinder blocks pic.twitter.com/m7m0Sq03X5

2The brutal slayings allegedly happened during a Craigslist sale of a gun that “went wrong.”

According to court records, on April 14th, Kevin drove Brett to meet Alize Smith and Jarron Moreland because he believed his brother was attempting to purchase a gun from Moreland. The sale was reportedly arranged via Craigslist and the two parties had agreed to meet in a grocery store parking lot.

Kevin told police that Moreland and Smith got out of a sedan and into the back seat of his van. He told police he heard a gun “rack” and he witnessed his brother open fire, killing the two men.

“When [Smith and Moreland] entered the vehicle, the white men said they heard a gun being racked,” Sgt. Jeremy Lewis of the Moore Police Department said. “So one of them fired four rounds.”

Kevin told police that he and his younger brother Brett took the victims’ dead bodies to a nearby residence, where they met up with Barker who helped them dispose of the bodies and clean the van.

Barker told police they tied cinder blocks to the bodies so they would sink in the pond. He also told police he and the Garcia-Boettler brothers removed both victims’ clothing and burned them in a barrel before dumping their naked bodies in the water.

KFOR reports that the police found cleaning products and a power washer surrounding the white Chrysler Town and Country van. Authorities said the inside of the van was splattered with blood, and a chainsaw and jigsaw were found soaking in water.

Police later searched the pond with the family outside the property and found Smith and Moreland’s dismembered corpses tied with tarp and attached to cement blocks in the water. A GoFundMe page set up to help Moreland’s family says the whole thing started with the Craigslist deal. The summary on the GoFundMe page states: “Hello. As you may already know, my brother Jarron and another individual by the name of Alize Smith were murdered and abducted as the result of what I, myself, would call a cold blooded unnecessary craigslist deal ‘gone wrong.'”

Jarron’s brother wrote that he was a young father. He wrote: “My brothers funeral was April 28th, just two days after his son Jarron Jr.’s 6th birthday. His funeral has been paid for by some sort of victims fund provided to us by the state of Oklahoma. At this point the only thing we as a family are worried about is taking care of Jarron Jr. in Jarron Sr.’s absence. Anything helps and everything is appreciated, Thank you for your time and if you choose to donate, thank you for your donation.”

3The prosecutor doesn’t plan on charging the white family with a hate crime or any race-related charges.

Cleveland County prosecutor Greg Mashburn told the Associated Press that “he does not plan to seek additional charges related to race,” despite the glaring evidence appearing to suggest otherwise.

“We definitely explored that, and the evidence absolutely shows that this was not racially motivated,” Mashburn told AP. However, people on social media don’t see it that way, as they are referring to the homicides as a lynching, though authorities refuse to use that term in relation to the case.

Alize Smith and Jarron Moreland’s death have left behind grieving families. “It’s like my whole world’s been crumbled,” said Kennetha Moreland, Jarron’s mother. “I can’t even have proper closure because my baby is disfigured,” Kennetha said, “and I can’t even see him.”

She said she knew something terrible had happened when she first found out her son was  missing. “I told the detective that if my son don’t call me by a certain time, my son is hurt bad or he is dead,” Kennetha said.

When she found out Jarron was dead, it “felt like somebody ripped my heart out of my chest.” Then, her pain worsened once she learned that her son’s body was found in pieces.

“The medical examiner told me to remember the vision that I have of him in my mind,” Kennetha said. “The funeral home director man, when he got him, he said, you don’t want to look at him because that’s something that you’ll never, ever, ever forget.”

Kennetha said that she couldn’t understand why her son and his friend’s murderers chose to dismember their bodies. She also questions what really happened the night the men disappeared, and whether it really was a “gun sale gone bad,” as the defenders contended. “To me, it’s like y’all planned to torture them,” she said.

Ms. Moreland said she won’t rest until justice for her son’s murder is served. She said she wants to see the four suspects receive the same treatment they allegedly gave Jarron and Alize.

“I know he’s in heaven, he’s looking down,” Kennetha said, “and he knows that his mama got him.”

Jarron’s grandmother, Bobbie Moreland, also spoke highly of her grandson as a devoted father. “Very, very good daddy. He took care of his little boy and the boy is going to be lost without his daddy,” she said.

Alize’s 12-year-old sister told News9 her brother “was the sweetest person you could wish for. He was the best person to me.”

Raquel Hall, Alize’s aunt, remembered her nephew for his joyful disposition. “He had this goofy laugh that we all still can see and hear,” she said. “And we want people to know that he really tried. He had a few problems in his life but he had a great support system and we were all there for him.”

4A number of celebrities have spoken out about the case and the lack of coverage by mainstream media.

For whatever reason, so far, the mainstream media has not reported on the brutal slayings of Alize Smith and Jarron Moreland. The only reports we could find about the case are from local media and online sources. As far as we know, the incident has not been covered on television, and internet reports didn’t emerge until after media outlets were called out on social media.

It took me 10 days to hear about this. No type of media coverage. Why do we allow these things to go under the radar? We can’t stop until justice is fulfilled. SAY THEIR NAMES #RamonSmith #JarronMoreland pic.twitter.com/as0yVuxGmT

Because of this, a number of celebrities and social media activists have spoken out about the incident and are calling the mainstream media out for the lack of coverage.

Actor/comedian D.L. Hughley shared a newspaper headline on his Instagram that read: “Two Young Black Men Lynched In Oklahoma By Four Whites And It’s Getting No Media Attention.”

Rappers T.I. and Lil Boosie followed up with their own posts as well. “#USorELSE,” Tip wrote in the caption. “F**ked all the way up It’s 1968 all over again smh. LYNCHED!!” Boosie shared.

5Members of the accused family have criminal histories.

With the exception of 16-year-old Brett Garcia-Boettler, all the suspects involved have had previous run-ins with the law.

Crystal Boettler, Kevin and Brett’s mother, was previously accused of multiple counts of violation of the compulsory education act (i.e. truancy). Fourteen charges are listen in court records, with all either resulting in acquittal or dismissal. Court records from 2011 read: “COURT BELIEVES STATE SHOULD OFFER PROOF BEYOND A REASONABLE DOUBT AS TO DEFENDANT’S WILLFUL FAILURE TO CAUSE OR COMPEL MINOR CHILD TO ATTEND AND COMPLY WITH SCHOOLS RULES) IN THIS CASE MINOR CHILD IS CLEARLY BEYOND THIS DEFENDANT’S PARENTAL CONTROL.”

Boettler was accused of dealing meth in 2009, but that charge was dismissed by request of the state. A second drug charge involving PCP in that case resulted in a deferred disposition. Oklahoma court records also mention other cases under a different first name with “Crystal Boettler” listed as the alias.

According to court records, Boettler’s alleged boyfriend, Johnny Shane Barker, has a criminal history in Cleveland County, Oklahoma. He was convicted in 2006 of second-degree burglary and drug offenses.

Kevin Garcia-Boettler also has a past drug case in Cleveland County from 2015, however, court records say the disposition was deferred.

The victims also had some prior run-ins with the criminal justice system. In 2015, Moreland was convicted of possessing a firearm in 2015. As for Smith, a bench warrant was issued for him in a drug case that was pending at the time of his death. He was would have been sentenced in that case in April.