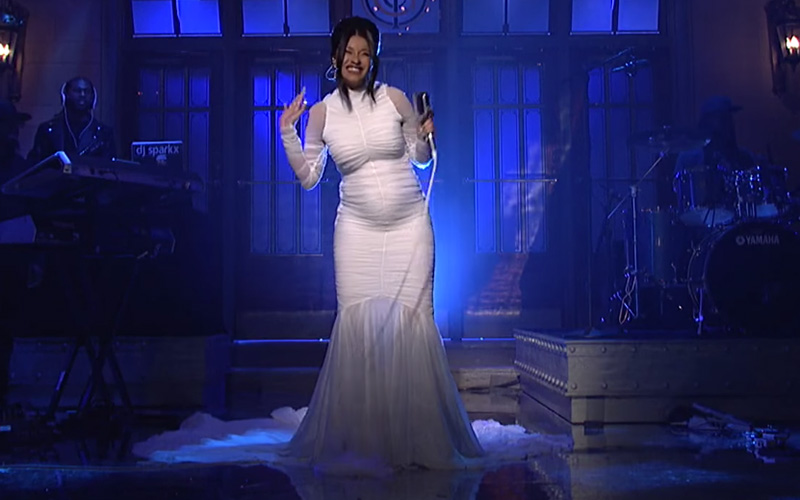 Cardi B’s big not-so-secret has FINALLY been revealed. The rapstress confirmed her pregnancy and showed off her baby bump during her big appearance on SNL last night!

Fresh off the release of her debut album Invasion of Privacy, Cardi B made her Saturday Night Live debut this weekend by performing all of her singles from the project.

After an introduction from “Black Panther” star and SNL host Chadwick Boseman, the femcee—wearing a big poofy dress that covered her belly—kicked things off with a short rendition of her first hit “Bodak Yellow” (including a little bit of the Spanish version) before quickly transitioning into her now-platinum second single “Bartier Cardi.”

Cardi’s second set was her third single “Be Careful.” At the beginning of the performance, the camera was zoomed in on Cardi, then as the camera panned out to show her full body, you could hear the crowd cheering as you could obviously see her growing baby bump in her tight white dress.

A TMZ report revealed Cardi’s pregnancy last month, and the former Love & Hip Hop star has remained mum on the subject for a minute, but it looks like the cat is finally out of the bag now.

Cardi’s fiancé and baby daddy Offset responded on Twitter, saying that he was looking forward to their next chapter.

As for Cardi, she wrote that Baby Bardi was going to propel her success even further.

I started winning when the whole world was doubting on me !think imma lose with my little baby counting on me ?

Congrats to Cardi B and Offset!

From the looks of it, Cardi is about five or six months pregnant, so Baby Bardi will probably arrive sometime near the end of the summer, either in July or August, right before she’s due to hit the road with Bruno Mars for the fourth and final leg of his “24K Magic” World Tour.