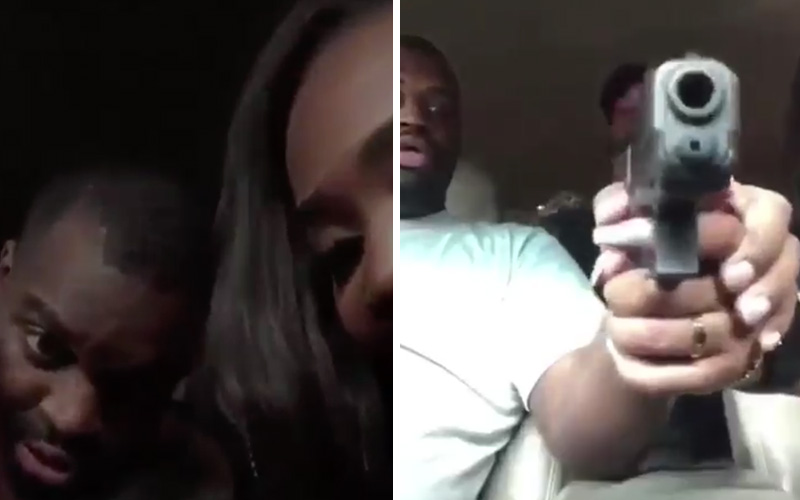 A Texas man is clinging to life after being accidentally shot in the head over the weekend, and the whole thing was shockingly live streamed on Facebook.

The video, which was recorded via Facebook Live, shows Cassandra Damper playing with a gun as the three of them laugh and joke around while Damper points the gun at the camera, saying, “You see what we do to lying ass hoes?” apparently referring to someone who commented on the live video.

WARNING: The following video is VERY graphic and can be seen as disturbing by some viewers. Watch at your own discretion.

Devyn can be heard saying “You’re making me nervous” as Cassandra playfully waves the gun around. “We draw down on them hoes!” Damper yells as Holmes grabs her hand as a precaution.

Cassandra then points the gun at Devin and cocks it. Cadillac Coleman can be heard in the background saying, “It ain’t got no clip bud” in an effort to assure his friend that the gun wasn’t loaded and everything was OK.

Unfortunately for Devyn Holmes, however, the gun was in fact loaded (FYI: Just because a gun doesn’t have a clip doesn’t mean there’s not a bullet in the chamber). Cassandra then fires the weapon, accidentally shooting Devyn in the head. Within seconds, as blood is pouring from Holmes’ head, Damper and Coleman immediately evacuate the vehicle.

The horrific incident was recorded on Cadillac Coleman’s Facebook Live, and despite the footage being removed from Coleman’s page, it has since been reposted online multiple times.

You can watch the disturbing clip above, but be warned, it is VERY graphic.

Holmes was taken to a hospital and is reportedly on life support. According to Media Take Out, Damper and Coleman allegedly claimed that Holmes shot himself in the head when they called police, however, we can clearly see in the footage that Damper was the one who pulled the trigger.

A tweet from Houston Police posted just before 4 a.m. EST noted that they were investigating an incident in which a “male shot himself in [the] head” and he was “transported to Ben Taub.”

Holmes is said to be in “very serious condition and may not make it,” Media Take Out reports.

As for Damper, she was arrested and charged with tampering with evidence in relation to a homicide. She was held without bail at the Houston Police Department Southeast Jail. A screenshot from MediaTakeOut shows her arrest details below, however, we weren’t able to independently verify whether she’s still in jail.

According to Click2Houston, police said the case will be referred to the grand jury to see if any additional charges will be filed.