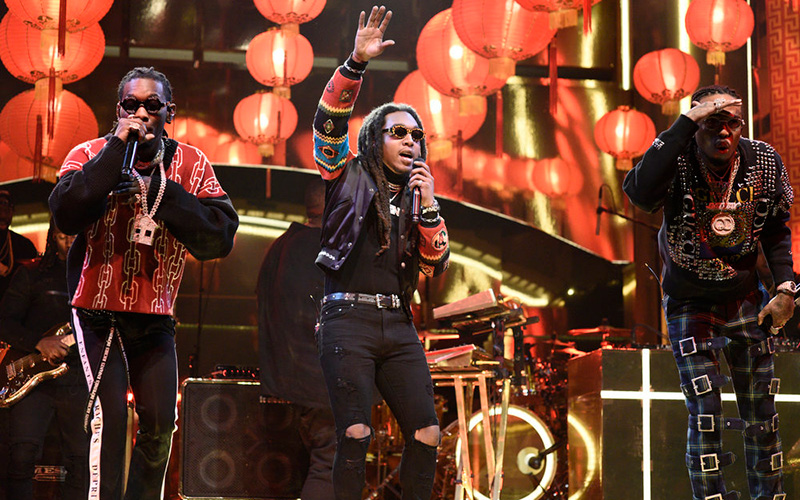 Last night, Migos finally made their “Saturday Night Live” debut as musical guests. The Atlanta rap trio, promoting their latest album Culture II, was backed by a live band as they performed their hit single “Stir Fry,” as well as another cut from the project called “Narcos” on this weekend’s episode, which was hosted by NBA legend Charles Barkley.

Culture II—which features some of today’s biggest hip-hop artists, like Drake, Nicki Minaj, Gucci Mane Travis Scott, Cardi B and more—is Migos’ third album. It was released in late January and debuted at No. 1 on the Billboard 200 albums chart after moving nearly 200K units its first week out.

Even though the album hasn’t received the same critical acclaim its so far untoppable predecessor Culture received last year, the project is still a solid piece of work from Quavo, Offset and Takeoff. In fact, Culture II’s lead single “MotorSport,” featuring Nicki Minaj and Offset’s possibly pregnant fiancée Cardi B, received Gold certification in the United States, and the album’s infectious second single “Stir Fry” was used as the official song of NBA All-Star Weekend 2018.

While this weekend’s SNL appearance marks Migos’ first time performing as a solo act on the show, this isn’t their first SNL performance ever. If you’ll remember, the trio joined Katy Perry when she was the musical guest last May for a super awkward performance of their collab single “Bon Appétit,” which inspired the creation of a bunch of hilarious GIFs like this:

And we for damn sure can’t forget about this one:

A couple of months before that, in March 2017, Migos made their official late night TV debut by performing their No. 1 hit “Bad & Boujee” on “The Tonight Show with Jimmy Fallon,” and they followed that big-time appearance up with a performance of “Stir Fry” in January of this year.

Quavo, Offset and Takeoff will be booked and busy over the next few months as they promote Culture II. Migos are slated to headline the 2018 Panorama Festival this July in New York City, and the group will also perform in April at Coachella 2018 in California and the 2018 Broccoli City Festival in Washington, D.C.

You can also catch Migos the first weekend of March headlining Buku 2018 in New Orleans, but it looks like May will be their busiest month, as they’re scheduled to perform at Soundset 2018 in St. Paul, Minnesota, as well as JMBLYA 2018 in Austin, Texas AND the 2018 Rolling Loud Festival in Miami.