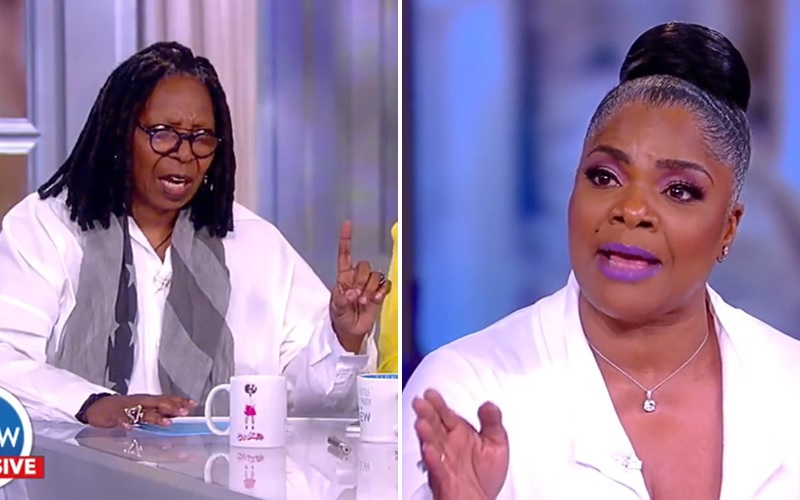 There was a spat on The View yesterday (as there always is), but not between the hosts. Whoopi Goldberg and guest Mo’Nique clashed as the actress once again tried to explain why she feels Lee Daniels, Tyler Perry and Oprah blackballed her career.

Mo’Nique appeared on The View Thursday (Feb. 22) to discuss her latest Hollywood grievance: her call to boycott Netflix after being given a low-ball offer for a stand-up comedy special. However, the conversation took a turn when Mo’Nique’s reputation of being difficult to work with was brought up.

The comedian/actress says this characterization is false and was engineered by Daniels, Perry, and Oprah when she refused to internationally promote the acclaimed film, Precious, without compensation. Mo’Nique attempted to compare the way she was being treated to the #MeToo movement of women being sexually harassed and pressured in Hollywood.

“This is what happens—in my humble opinion—when you don’t go to the hotel room…” Mo’Nique began before quickly being interrupted by Whoopi, a fellow comedian and Oscar winner.

“I’m going to stop you because contractually, when you make a movie, regardless of who you sign the deal with, your job is to go and promote said movie. And we’ve had this conversation, and I said if you had called me, I could’ve schooled you on what was expected.”

Mo’Nique refused to back down and maintained that she did do what was expected of her.

Before cutting to the show’s final break, Mo’Nique continued to claim she was bullied by the Daniels/Perry/Oprah trifecta and that her career has suffered because of it.

“What Tyler Perry showed me, Lee Daniels, Oprah Winfrey and [“Precious” studio] Lionsgate is that, ‘When you don’t do what we ask you to do, we will take your livelihood.’

The segment was short, but the exchange definitely caused a few fireworks to fly. Check out the video footage above.