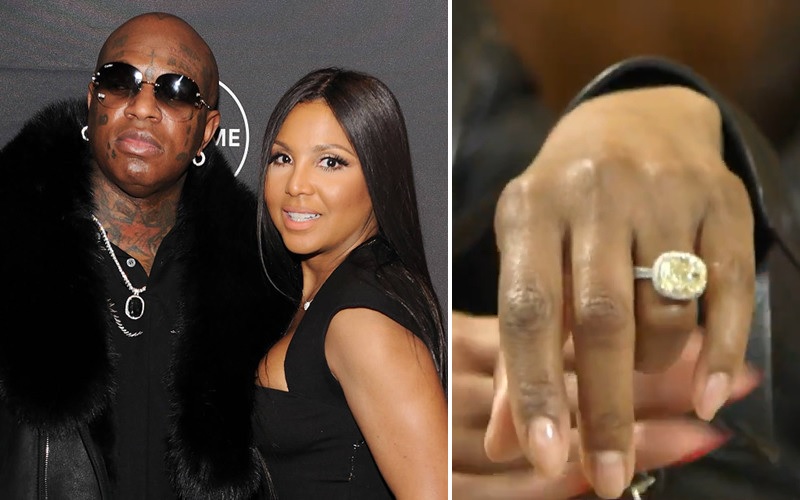 In a somewhat of a Kris Jenner move, Toni waited for season 6 of Braxton Family Values to come around to share the big news. “I have an announcement to make — I’m engaged!” she tells her family as she shows off her yellow diamond in the BVF trailer released on Saturday (Feb. 17).

Their lives may change, but the sisterhood remains the same. #BFV is back in March! pic.twitter.com/BESPKSKxvk

Toni and Birdman have been romantically linked since 2016, but have remained relatively silent about their relationship. They have also repeatedly denied rumors they are engaged. Toni’s rep had to shut down rumors she was married in October.

The singer most recently denied Birdman was her husband during an interview with Power 105’s Angie Martinez (while wearing a diamond ring, which she claimed was just a birthday gift).

Toni was referring to her sister Tamar Braxton’s appearance on The Wendy Williams Show last year when she shared her suspicions. “I think that’s my brother-in-law, I do,” Tamar told the host. “I think they eloped. I’m telling you, they is married.”

Tamar, Toni’s sisters, and the Braxton matriarch, Evelyn Braxton, have given their stamp of approval to the unlikely couple. Evelyn had nothing but nothing but kind things to say about Birdman during a 2016 interview on The Rickey Smiley Show:

“I don’t care what other people say about him he is a nice man. He’s full of ‘respek.’ Put some respek on it! I met him years ago, Toni’s known him for about 15 years… Ever since I’ve been knowing that young man, I think he’s just phenomenal.”

Season 6 of Braxton Family Values premieres in March on WE TV, the season will also continue to document the breakdown of Tamar and Vincent Herbert’s marriage.