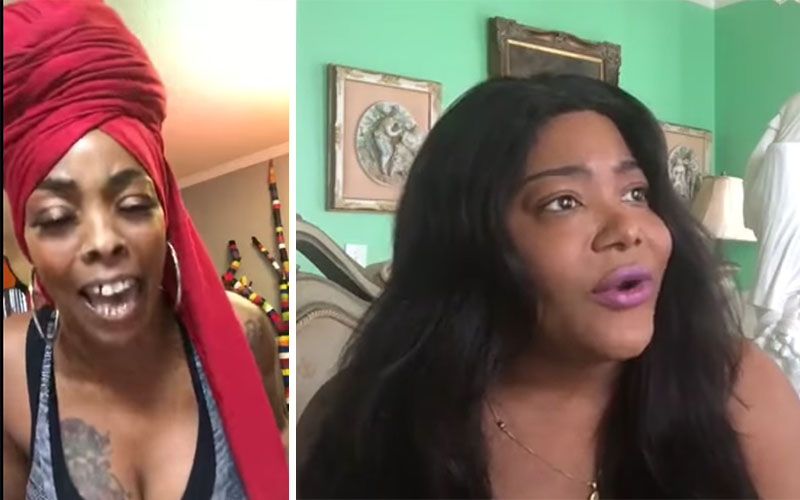 If your ratchet antennas have not been tuned to “The Queens Court,” the online talk show and podcast hosted by Khia of “My Neck, My Back (Lick It)” fame and transwoman TS Madison, then you need to pull your head out of Mona Scott-Young’s messy wig and get with the best thing to hit the hoodverse since WorldStarHipHop.

The show, in its original inception, consisted of nothing more than TS Madison and Khia sitting in front of an iPad in her living room talking shit, laughing and roasting callers who dialed in for the gags. But Maddie decided the talk show needed a real set, so she and Khia got a backdrop, some props and judges robes. Which might’ve been tolerable, but along with the new props, Maddie decided to hire a “professional” production crew to enhance the lighting and camera equipment.

Unfortunately, that didn’t go so well when they tried to go live with for their weekly episode on Monday (Feb. 5) with special guest Mo’Nique. The audio, the lighting, and the stream were all jacked up, and after several delays, Madison couldn’t get it to work and she broke down. This might’ve been behind-the-scenes drama that none of us would’ve known about if Mo’Nique hadn’t been live streaming the entire debacle on her Periscope. (THE SHADE!!!)

Khia, who has a world famous motor mouth and an equally hot temper, was OVER the production crew’s failures and decided she was better off not participating in the shitshow, so off she went, leaving Madison a heaping, sobbing mess all by her lonesome.

After the aborted interview and the behind-the-scenes meltdown began to make the rounds on the internet, chatter about the death of “The Queens Court” began to trend on Black Twitter and YouTube. Funky Dineva (real name Quentin Latham), a distressed and evicted blogger who’s had more than his own share of public failures and flops, took to his YouTube channel to offer his take and advice to the pair. Given that he’s supposedly “friends” with TS Madison and once appeared on one of Khia’s “roast and gag” live streams that preceded “The Queens Court,” Quentin’s perspective carried more weight than others.

In the video, Funky Dineva gives props to the duo for building a viral brand, but he reveals his disdain and disgust for Khia, who he brands a liar.

Things got quiet for a while and people expected the duo to return to the air the following week on Feb. 12, but alas, the dynamic duo were no-shows. Madison did emerge to confirm that “The Queens Court” was on hiatus and would return in March, but the two were still committed to their live appearances.

Well, Khia finally broke her silence after being quiet for a week and let loose on a live stream of her own on Tuesday morning. It’s 59 minutes, so if you feel like listening to an angry beaver scream and sputter, have fun:

If you don’t have the stomach for Khia’s bile, here are the highlights:

It was a lot to digest and once Khia’s rant made the rounds, TS Madison had to respond with her own response:

Unlike Khia’s video, Madison’s live stream was only 20 minutes but again, in case you want the highlights:

On top of Khia and Madison’s responses, Funky Dineva had yet ANOTHER response, taking aim at Khia for claiming that he snorted coke in front of her.

Are you exhausted yet? Cause I am.

I hope that Khia can get over herself and return to the fold so that “The Queens Court” can live on. TS Madison was certainly trying to do too much too soon, but her heart was in the right place and it’s still salvageable. Madison just needs to listen to Khia, fire the crew, and get back to basics on what the fans want. And Khia needs to put Funky Dineva on the docket, roast him once and for all, and stop filling his YouTube piggy bank.

TS Madison is certainly holding out hope. Come on, Khia. Don’t let her, or the fans, down.