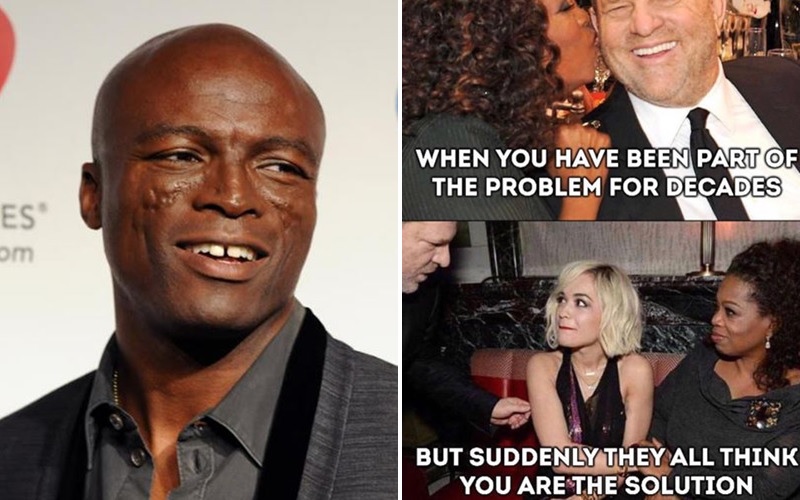 Oprah Winfrey got Hollywood super excited about a potential 2020 presidential run following her inspiring Golden Globes speech earlier this week. But there’s one Hollywood celebrity who’s definitely not here for a President Winfrey.

Singer Seal slammed Oprah on Wednesday (Jan. 10) for her rousing #MeToo and Time’s Up speech. He posted a meme insinuating that Oprah’s “been part of the problem for decades” when it comes to sexual harassment in Hollywood due to her association with Harvey Weinstein.

“Oh I forgot, that’s right…..you’d heard the rumours but you had no idea he was actually serially assaulting young stary-eyed actresses who in turn had no idea what they were getting into. My bad. #SanctimoniousHollywood”

Allegations against the disgraced Hollywood giant obviously sparked the #MeToo movement when more than 30 women came forward to accuse Weinstein of sexual misconduct. Seal’s post suggests that Oprah knew about Weinstein’s behavior, but never spoke out, a criticism that that other Hollywood heavyweights like Meryl Streep have also faced.

Despite her professional relationship with Weinstein, Oprah has made it clear that she stands with his accusers and other victims of sexual harassment. “If we make this just about Harvey Weinstein, then we will have lost this [watershed] moment,” Oprah told CBS News as Weinstein’s scandal grew back in October 2017.

It was also reported in October that Oprah had privately lent her support to Weinstein. However, her reps quickly shut down the report and clarified that she was only interested in doing a 60 Minutes interview with Weinstein in hopes that he would admit his inappropriate behavior.

“She was only interested if he’d look in the mirror and give her the honest, bone marrow truth.”

Though she didn’t mention Weinstein by name, the crux of Oprah’s Golden Globes speech was that a “new day is on the horizon” due to the #MeToo movement and the brave women and men speaking out against sexual abuse and harassment in the workplace.

Reports suggest Oprah is “actively thinking” and “intrigued” by the idea of running for President of the United States in 2020, but she has made no official announcement and has previously denied any plans of running for elected office.