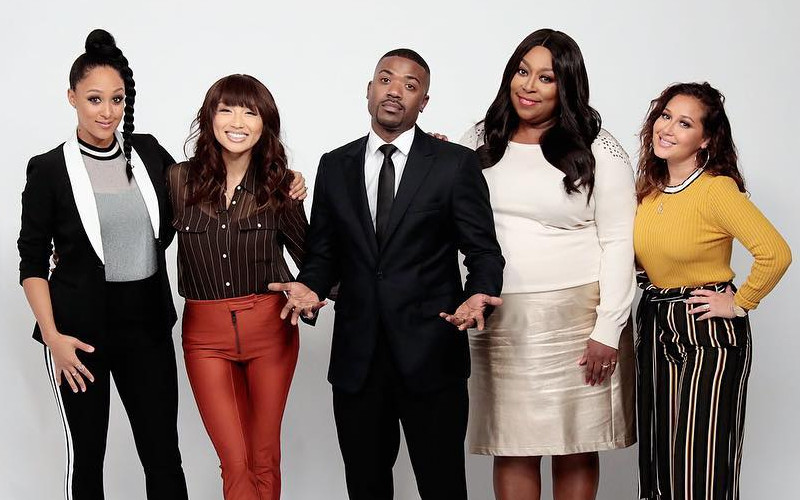 Has The Real finally found a fifth co-host to replace Tamar Braxton? Nothing has been confirmed, but there’s a whisper that that another voice will be joining “Girl Chat” and that voice allegedly belongs to a guy!

With one cryptic Instagram post on Monday (Dec. 4), Ray J sparked speculation that he may be joining the daytime talk show as a permanent co-host. “Looks like I got a new job,” he captioned a photo of himself with the current Real hosts.

“Looks like a got a new job!!! Stay tuned!! #TheRealwithRayJ #telepictures #DaytimeTV”

The speculation left some Real fans just as confused as I am.

So Ray J’s the new host on The Real? Ok…

I'm upset Ray J will permanently be on The Real ????? nothing against Ray but I like it how it is & I still miss Tamar ?

Ray J previously served as a guest co-host just last week on November 27 when he also announced that his wife, Princess Love, is pregnant with their first child. Again, nothing has been confirmed. As far as we know, Ray could just be hyping up his next guest co-host appearance.

But the Love & Hip Hop Hollywood star has been on his grind lately. He signed a $31 million deal in early November with a tech company to launch his own electronic transportation brand.

Since its 2014 debut, The Real has featured an all-female panel and is known for its signature “Girl Chat” segments. Adding a male presence (let alone Ray J) would be a shocking move, especially since the show’s target audience is young, millennial women.

The current panel features Adrienne Bailon, Loni Love, Jeannie Mai, and Tamera Mowry-Housely. Original co-host Tamar Braxton was unexpectedly fired in 2016 and the show has yet to officially replace her, using a rotating door of guest hosts instead.