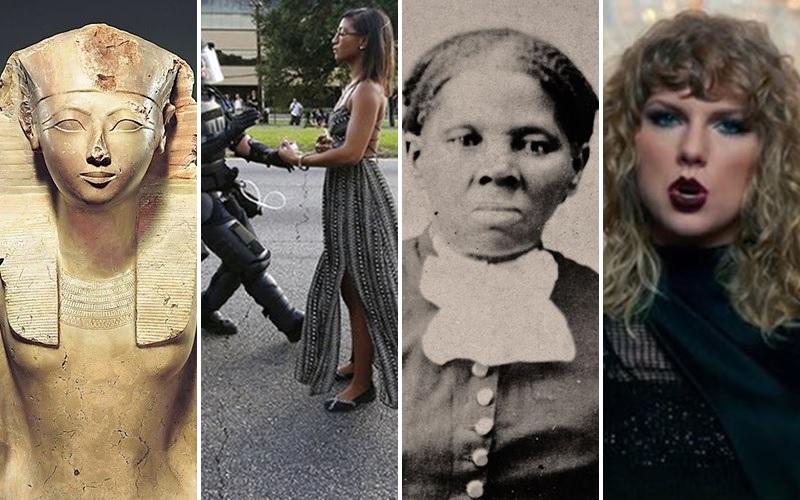 Taylor Swift is probably somewhere celebrating that her album, Reputation, spending its third consecutive week at the top of the charts, but she might wanna stay off Twitter right now. After a fan claimed their fave was the “baddest,” Twitter has been going all the way in on Taylor Swift to prove otherwise, with receipts!

On the day Reputation dropped way back in early-November, a fan made the rhetorical statement: “Name a b*tch badder than Taylor Swift.”

But leave it to Twitter to make something go viral a whole month latter. Over the past few days, many Twitter users have responded to the tweet by naming several other “bad bitches,” including historical figures like Rosa Parks and Harriet Tubman, Holocaust survivors, feminists, and even their own mothers and grandmas.

Safiyyah Khan, British-Pakistani girl who smiled down on an ultra right protester.https://t.co/4G22Ot9wI8

And she's wearing FREE PALESTINE t-shirt while at it. pic.twitter.com/vAOnp6to0F

Someone tried to steal my then-80yo mother’s purse and she grabbed it back, called the police, and then ran the rest of her errands. ? https://t.co/1gwzZSTJwD

My grandmother. Pulled out of school age 10 to care for her 12 siblings by taking over an adult women's duties in rural Mexico. All her siblings became professionals thanks to her. She's now almost 80, has arthritis and no fingerprints. She can get away with murder if she chose.

Nzinga, queen of the Ndongo and Matamba Kingdoms. She I s best remembered for her resistance against the Portuguese, and setting her people free from slavery. pic.twitter.com/LoR0PibzCZ

At 15, @Malala was shot in the head by the Taliban for insisting that girls had the right to an education. At 17, she became the youngest winner of the Nobel Peace Prize in history. At 18, she opened a school for Syrian refugee girls in Lebanon. https://t.co/UjPdnoqc0o

Pharaoh Hatshepsut; she one of the longest and prosperous reigns of any pharaoh (male or female). #WomenInHistory #AncientEgypt #Kemet pic.twitter.com/mp4X93zjK7

My grandmother who raised a half dozen kids, only one of which was her own, worked every day of her life. Could drink anyone under the table and survived breast cancer TWICE. And when her body finally gave out and she left us she was more afraid of what we would do without her. https://t.co/EPxKyXkVDb

Sophie Scholl, the German student executed by the Nazis for distributing anti-war leaflets at the University of Munich in 1943 comes to mind. pic.twitter.com/AZCO0oWg0K

Franceska Mann, the Polish ballerina, who, while being led to the gas chamber, stole a Nazi guard’s gun, shot him dead, and started a female-led riot that gave hope to all of the prisoners of Auschwitz in the face of certain death https://t.co/s7yM6MDYT5

Milada Horakova. Czechoslovakian politician & freedom fighter. Arrested by nazis in 1940 and tortured. Freed by US soldiers in 1945. Arrested again by communists in 1949. Sentenced to death in a staged hearing and hanged in 1951. Remained positive and strong to the very end. pic.twitter.com/WCIhYRjyRF

Mariya Vasilyevna Oktyabrskaya: her husband was killed by the Nazis in 1941 during Operation Barbarossa. She went to the Soviet gov’t and demanded to get a tank to kill Nazis. The gov’t relented and she killed Nazis with her tank. pic.twitter.com/9Iinz8ndxx

anyone who has openly disavowed white supremacy https://t.co/5fdrrsVnqP

I’m sure the original poster only wanted to show Taylor Swift some love, and didn’t mean anything by the tweet. However, even Swift can’t argue with this list of strong women.