GOSSIPONTHIS.COM Celebs Kim Kardashian Dressed as Aaliyah for Halloween and Black Twitter Was NOT... 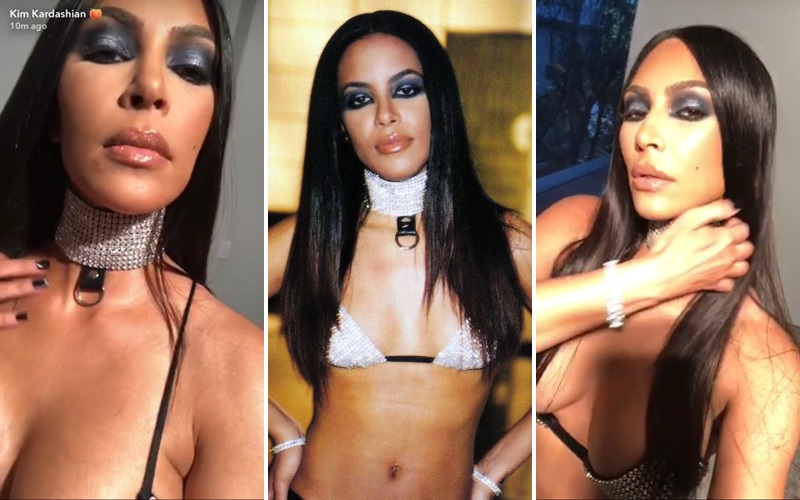 Happy Halloween, courtesy of Kim Kardashian. The reality star kicked off All Hallows’ Eve by channeling her inner Cher. However, it’s her second costume that has outraged Black Twitter, causing them to drag Miss Kardashian-West.

On Saturday night (Oct. 28), Kim decided to dress as the late R&B icon Aaliyah. She used the singer’s 2000 “Try Again” music video for her inspiration.

Black Twitter was NOT happy with Kim’s choice of costume and dragged her for trying to emulate the Princess of R&B. “Aaliyah” even became a top five trending topic.

Me @ Kim dressing up as Aaliyah for Halloween ? pic.twitter.com/SNjq6dL94G

Kim Kardashian looking like she dressed up as Cher dressing up as Aaliyah for Halloween. pic.twitter.com/15rpLP14IG

Kim Kardashian doing a Halloween costume as Aaliyah is the most disrespectful thing I’ve seen in the last couple of years.

So Kim Kardashian went as Aaliyah … I don’t approve….

Who told Kim Kardashian to try to be Aaliyah for Halloween?

It's not that Kim Kardashian doesn't look good

However, not everyone opposed Kim’s Aaliyah costume, especially since she didn’t use any form of blackface.

There is literally nothing wrong with Kim’s Aaliyah and Cher costumes. Just say you hate her and move on. pic.twitter.com/A0shxYDcom

What’s the issue with Kim Kardashian dressing up as Aaliyah? IT’S HALLOWEEN ?? Y’all acting as if she did black face. pic.twitter.com/U7t6QXVbPd

Kim K annoys me but I must admit that hoe nailed her Cher and Aaliyah looks pic.twitter.com/1GaNjObv5N

On Friday night (Oct. 27), Kim attended Casamigos’ annual Halloween bash as Cher at the 1973 Academy Awards. She was accompanied by her best friend Jonathan Cheban dressed as Sonny Bono. This was definitely a better choice.