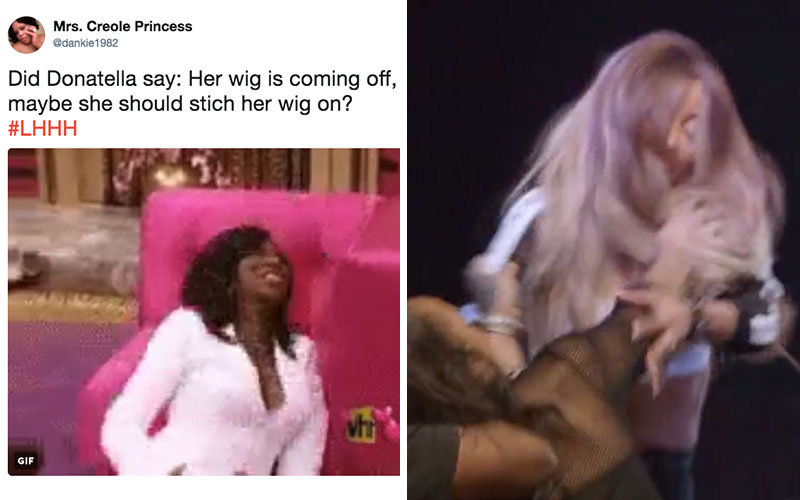 Among the many reasons we watch Love & Hip Hop Hollywood, the biggest would have to be the fights, because we all love a good fight, right?

In recent seasons, production has warned cast members that throwing hands will result in reduced checks and camera time, so instead of fighting with their hands, nemeses must use their words. And if that doesn’t work, they’re allowed to, at the most, throw drinks and grab wigs. And Masika chose to do the latter when she finally came face-to-face with Hazel E on Monday night’s (Oct. 9) episode.

When Donatella asked Masika to be a part of a music showcase, she had no idea “Nazel E” was going to be a part of it. So when “Nazel” strolled into the room, Masika tried to get her attention by yelling a plethora of hilarious nicknames: “Young man! Nosey-Nose! Nostrildamus!” And when Hazel refused to come to her, Masika barreled through a number of bodyguards and grabbed her by her wig, nearly ripping the thing off and pulling her over a whole balcony.

“BOZO WITH THE BIG NOSE, THERE SHE GOES! ?” #LHHH pic.twitter.com/iWZEIuWyrf

And apparently, I wasn’t the only one who thought Donatella’s “Her wig is coming off!” declaration (in her posh, British accent, no less) was not only hilarious, but also hella shady, because Twitter couldn’t get enough of it.

Check out the best and funniest tweets below:

Donatella yelling "Her wig is coming off" during the fight #LHHH pic.twitter.com/RaaLlVUOlw

Her wig is coming off, maybe it need stitches ????? #LHHH pic.twitter.com/iRAFh7Zl6e

I don't know what's worst, Hazel's wig coming off or Donatello announcement that her wig is coming off & a recommendation to stitch It #LHHH

Wait, Dontella just shaded her omg. She said her wig is coming off. She should have stitched it down ??? #LHHH

Did Donatella say: Her wig is coming off, maybe she should stich her wig on?#LHHH pic.twitter.com/GzIbgN52v7

“Her wig is coming off. Maybe she’s got to stitch it?” —Donatella ???#LHHH

Masika saying come here young man and damn near snatching Hazel off the stage had me ??????#LHHH #lhhhollywood pic.twitter.com/12b0MQbnQG

Donatella is slick messy.
You gotta be messy connoisseur to truly pick it up. #lhhh pic.twitter.com/usDocrh16a

“Her wig is coming off, maybe we have to stitch it”, I’m dead right now #LHHH pic.twitter.com/b7z85AY5Wt

Why did she announce HER WIG IS COMING OFF ????#LHHH

Even before the episode aired, Twitter was ready for the wig-snatching:

the only scene in the episode I wanna see is Masika dragging Hazel by the roots ??? #LHHH pic.twitter.com/L2e1K15N0d

Lord. Please open up Mona’s heart and let her show us the snatching of Hazel’s life by Masika. Amen. ?? #LHHH

Watching today episode just to see Hazel-E get her wig snatched by Masika like this #LHHH pic.twitter.com/LQKCpeGpZm

Can we fast forward to the part where Hazel gets snatched into the next dimension ?? Please and thank you. #lhhhollywood #LHHH pic.twitter.com/nJf6BlCipg

Wigs are flying on a NEW #LHHH TONIGHT at 8/7c! pic.twitter.com/bz7NcMqu0g

In the words of Brooke Valentine, “Welcome. To. Hollywood.”